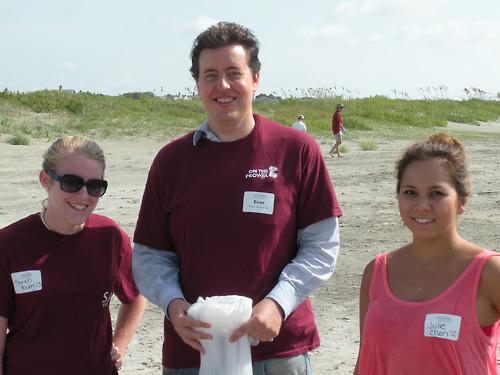 Evan Guthrie of the Evan Guthrie Law Firm in Charleston, South Carolina took part in a Beach Sweep in Sullivan’s Island, SC on Saturday September 8th 2012 sponsored by College Of Charleston Alumni Lowcountry Chapter and Charleston Waterkeeper. The goal of the beach sweep was to pick up trash and debris on a long stretch of beach. Although the beach on Sullivan’s Island is considered a clean beach there was a lot of trash present and more than enough for everyone that volunteered to pick up. One of the main sponsors of the sweep was the College of Charleston Alumni Association Lowcountry Chapter. The College of Charleston Alumni Association has a purpose to manifest an interest in, and to promote the welfare of, the College of Charleston. The Lowcountry Chapter of the Alumni Association is the largest chapter of the Association and encompasses the entire Charleston area. The other sponsor of the beach sweep was Charleston Waterkeeper. Charleston Waterkeeper is a data-driven, nonprofit organization focused 100% on water quality issues in the Charleston Area. There were about forty different volunteers for the beach sweep and several garbage bags of trash were able to be filled. The sweep was held in the morning before the temperature became too high. There was a brunch for all of volunteers at a beach house that was close to the beach sweep sign in station. There were several types of foods and beverages at the brunch. Attorney Evan Guthrie was able to fill up almost an entire bag of trash during the sweep. Mr. Guthrie is an alum of the College of Charleston for his undergraduate studies and was happy to be involved in an event in which he was able to have an immediate and visible impact on the community and local beach environment. This was the first service project that Attorney Guthrie participated in as a part of the Charleston Alumni Association Mr. Guthrie was joined at the beach sweep by two of his interns from the Evan Guthrie Law Firm. Julie Chen is a graduate of the College of Charleston Graduate School and Sarah Young is a current student at the College. Attorney Guthrie was glad to be able to contribute to the project as a team with his firm. Mr. Guthrie looks forward to being a part of future events with the Alumni Association.Evan Guthrie Law Firm is licensed to practice law throughout the state of South Carolina. The Evan Guthrie Law Firm practices in the areas of estate planning probate wills living trust special needs trusts personal injury accident and divorce and family law and entertainment law. For further information visit his website at http://www.ekglaw.com . Follow on Twitter https://twitter.com/ekglaw Like on Facebook http://www.facebook.com/ekglaw . Avvo http://www.avvo.com/attorneys/29401-sc-evan-guthrie-3562169.html LinkedIn http://www.linkedin.com/company/2526866 Google + https://plus.google.com/107380867225921981464/about Evan Guthrie Law Firm 164 Market Street Suite 362 Charleston SC 29401 843-926-3813Evan Guthrie Law Firm 164 Market Street Suite 362 Charleston SC 29401 843-926-3813