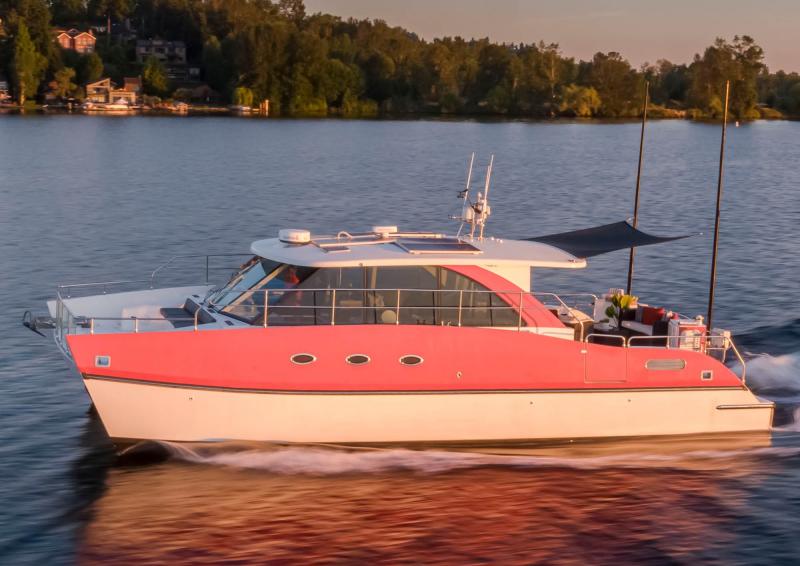 Yachting enthusiasts entered a bidding war in a rare opportunity to purchase a custom catamaran built for the 34th America’s Cup in San Francisco, reflecting today’s fast-moving, record-breaking yachting market. Keep on reading to learn more about catamaran GIZMO and today’s competitive yacht market. Catamaran GIZMO; the yacht M/Y GIZMO is an exquisite 45-metre boat and is just one of six limited-edition designs. Built in 2012 with comfort and adventure in mind, M/Y GIZMO is designed for entertaining, boasting a large aft deck and a light-filled interior salon featuring panoramic 360-degree views of the water and a modern configuration. Exquisitely maintained, catamaran GIZMO was originally purchased by an experienced yachtsman as a tender for his racing yacht. Catamaran GIZMO was sold above the asking price – a rarity in the yacht market - in a unique closing by a Worth Avenue Yachts Seattle yacht broker Diego Gomez. Record-breaking yacht sales Since the start of the pandemic, yacht sales have soared as an increasing number of wealthy individuals have sought the safe and private environment that yachts offer. According to BOAT Pro data, the second half of 2020 was the best on record for brokerage sales since 2009, with the final three months of 2020 seeing more boats sold than any other quarter on record. Gomez noted that at the start of the pandemic, Seattle yacht sales were driven predominantly by either small day boats or larger powerboats that could accommodate family groups while still allowing them to maintain social distance. However, he notes that catamaran GIZMO found its niche market as life started to return to a new normal and people began to gather once again. “As the pandemic wore on, and things began to open, vaccines arrived, and people started traveling and getting together more, the desire to be together, entertain, and socialize became the preference, and that is where catamaran GIZMO shines,” Gomez explained. Such was the demand for catamaran GIZMO that Gomez had to handle multiple offers at once, with four offers escalating throughout the negotiation phase, with a further offer coming in at the contract stage. With a combination of both in-house offers and co-op buyers, it was vital that Gomez handled all the offers to the highest ethical standards. “The hardest moment, however, was when the final two buyers both expressed that they had to have the boat,” Gomez stated. “I’ve never had two buyers who were perfect for a boat at the same time, and truthfully only one boat like it to sell them. To finally find the right buyer for such a unique boat that is not designed for the mass market was very rewarding.” A seller’s market Such is the demand for luxury yachts that the yachting market is currently in favour of the seller. According to luxury yacht brokerages, yachts are going into the contract stage within days of being listed, with some being sold before they are even formally listed. An increasing number of yachts, such as catamaran GIZMO, are now being sold for above the asking price as multiple buyers enter a bidding frenzy. Gomez noted that in today’s fast-moving luxury yacht market, buyers should consider time, price, and risk when making their final offer to ensure it is the most competitive. Offering higher deposits and considering escalation causes can all work in the buyer’s favour.As 2021 continues to break yacht brokerage sales, buyers will need to put in place robust offers to remain competitive and help them secure their ideal yacht.Chandler’s Cove, 901 Fairview Avenue N., Suite A180 Seattle, Washington, 98109 USA Press Contact: Relevance Monaco pr@relevance.digitalABOUT WORTH AVENUE YACHTS Worth Avenue Yacht was founded in 2011 by industry leaders Michael Mahan and Brian Tansey. With 30 years of experience in the yachting industry, Michael saw the need for a fresh and innovative approach to luxury yacht sales and charter—in fact, he believed an entirely new yacht brokerage business model was called for. Today, Worth Avenue Yacht’s cohesive, team-based attitude is what sets it head and shoulders above the rest, selling yachts on average nearly three times faster than the competition and with offices across the US and Monaco.Website: https://www.worthavenueyachts.com/

04-16-2020 | IT, New Media & Software
Akima Internet Pvt Ltd
Announcing launch of KoolGadgets.in - Coolest site for Gadgets
Gurgaon - 20th Apr 2020: Akima Internet Pvt Ltd announces the launch of a new website (www.koolgadgets.in) for Indian gadget lovers. The site offers an innovative and hard to find gadgets for home, car, travel etc. We have tied up with all major delivery / logistics companies and will deliver these gadgets across India. Few of the innovative gadgets available are :- 1) 9 in 1 Emergency toolkit for Car 2) 2 in 1 Wi-Fi
07-18-2018 | IT, New Media & Software
qyreports
Global Customer Satisfaction Software Market Size, Status and Forecast 2023
This report is a detailed report on Global Customer Satisfaction Software Market, which presents a combination of industry knowledge and research expertise based on regions too. This report delivers the market trends along with the market size for every individual sector. The report incorporates the various drivers as well the factors impeding the growth of this market during the forecast period. The report, provides the opportunities in the market and
05-15-2017 | Business, Economy, Finances, B …
GEEKY GADGETS
India's only Geek Electronic Gadgets Website: Geeky Gadgets
You're probably convinced that searching for techie types (or gizmo freaks, etc.) is something which involves a lot of technical understanding of megapixels, megabytes, and other mega-whatzits out there. If you're unfamiliar with the latest advancements in technology today, then it's totally understandable if you feel faint once you hear what digital. Just how does that produce you feel when you yourself have to look for someone who's into gadgets
05-27-2011 | Business, Economy, Finances, B …
Pride Family Brands
"Attention To Detail" Theme Unveiled For the First In Pride Family Brands' Serie …
In its ongoing efforts to support and educate its dealer network, Pride Family Brands is producing an informative and engaging video series featuring its Resident Lifestyle Expert, Jamie Sorcher. The series will offer a wealth of information, sales tips and style trends with regard to the high end casual furnishings crafted by Pride Family Brands. "Attention to Detail ," will debut as the first in the series. "This
04-21-2011 | Business, Economy, Finances, B …
Pride Family Brands
Pride Family Brands Names Jamie Sorcher as the Casual Furniture Manufacturer's R …
In response to retailer and consumer desire for more designer insight and information, Pride Family Brands announces that it has entered into an association with design expert and media personality, Jamie Sorcher to become the award-winning casual furnishings manufacturers' Resident Lifestyle Expert. In the position of Pride's Resident Lifestyle Expert, Sorcher will work to promote the outdoor furnishings brands of Pride Family Brands through videos, appearances, on air
02-08-2011 | Business, Economy, Finances, B …
prepaymaniauk
prepaymania
7th February - UK - HTC Wildfire, the cool and smart Android handset is now on stock at PrePayMania with Pay As You Go deal on Vodafone. Enriched with unparalleled features and decent appearance, HTC Wildfire comes with 528 MHz ARM 11 processor and smart Android OS which make is ultimate. This dominant HTC smart phone is now available on PrePayMania with Vodafone PAYG deal. On the conversation with General
Comments about openPR
9 o'clock: discuss press release with client, 10 o'clock: submit release to openPR, within the briefest possible time release is published and displayed in a prominent place on openPR.de. I am thrilled!
Zehra Spindler, Calypso Now! - Communication Agency