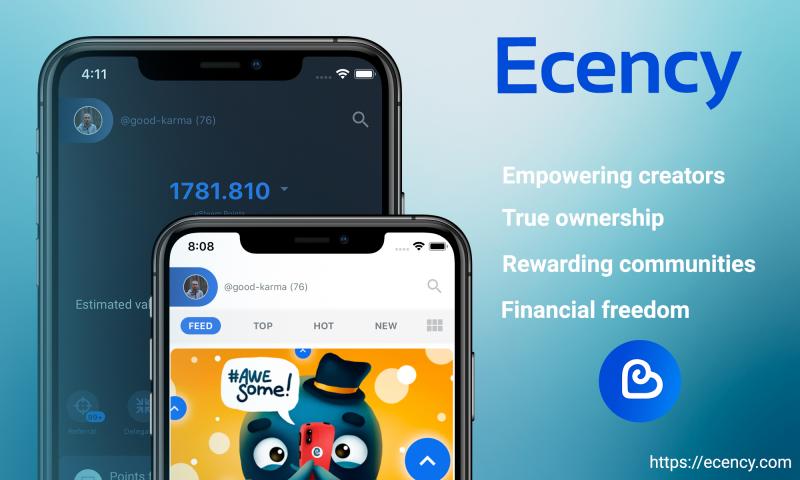 VILNIUS, Lithuania – September 13, 2021 – Ecency, a blockchain-based social network powered by Hive, is onboarding masses into blockchain space. Since its inception, Ecency has been one stop place for everyone to learn and be part of Blockchain technology such as Bitcoin, Ethereum and Hive. Designed with principles of true ownership, rewarding community and free speech, Ecency is in unique position to onboard masses. Social media has seen exponential growth in recent years and number of active daily users on different social media platforms expected to reach over 3 billion by 2027. On Ecency people will not only earn rewards for their social activities but also be founder of the platform with stake in its future.Ecency is Web 3.0 social media platform where people own complete control over their account. Nobody can remove or delete that account and its content, because only person have keys for that account will be the owner of that account. Permanently and forever stored on Hive blockchain, value and community you create will always live on and can be accessed in decentralised manner via different apps and services built on top of the same blockchain.Ecency is a gateway for financial freedom where you take control of your own account as well as your own finance. Bitcoin bringing everyone to be their own banks, give complete control over ones own finances. Ecency takes it further and enhances the experience with social elements and utilises fee-less blockchain features with human readable usernames. “We want to bring Blockchain, Bitcoin, Ethereum, Hive into hands of billion people. Everyone simply by being social and performing daily online activities should be part of this technology and technology should improve our lives, serve as a vehicle for our financial freedom, while preserving our freespeech. Secured by blockchain, powered by people,” said CEO and founder Feruz Muradov.Visit Ecency on the web at https://ecency.com or download the app today on Google Play or the Apple App store.Ecency Ramybes g. 4, Vilnius hello@ecency.com https://ecency.comEcency is an opensource, blockchain based social network with financial layer built-in on Hive protocol. Building social media with monetised rewards for content producers, true account ownership, free-speech, community powered network that gives power back to the people who are part of the network. Company actively helps building open source software based on blockchain technologies and welcomes you to join the journey. The Hive blockchain that powers Ecency, with lightning fast processing times and fee-less transactions, is positioned to become one of the leading blockchain technologies used by people around the world.

08-05-2021 | IT, New Media & Software
Ecency
Ecency Celebrating One Year of Bringing Decentralization to a Blockchain Social …
VILNIUS, Lithuania – August 5, 2021 – Ecency, a blockchain-based social network powered by Hive, is celebrating one year in business. One year ago, the company rebranded from its earlier identity and launched its new platform. The social network was created to revolutionize the way people interact, create, build and engage on the internet. Ecency is unique because it brings decentralization to the social media world. Ecency is designed on the

11-21-2020 | Business, Economy, Finances, B …
The Insight Partners
Honey Food Market Worth Observing Growth | Bee Maid Honey, Beeyond the Hive, Cap …
Honey is essentially a highly concentrated aqueous solution of dextrose and laevulose with small amounts of other complex sugars. It is sweet and viscous substance produced by bees and certain insects from nectar collected from flowers. Commercially available honey is made from clover, alfalfa, or acacia flowers. The color of honey usually ranges from white, amber, and red, brown to black, and is an essential factor in judging the quality
06-17-2020 | IT, New Media & Software
Market Insights Reports
G Suite Productivity Tools Market 2020 Business Scenario – Google, DocuSign, H …
The G Suite Productivity Tools Market report is a compilation of first-hand information, qualitative and quantitative assessment by industry analysts, inputs from industry experts and industry participants across the value chain. The report provides in-depth analysis of parent market trends, macro-economic indicators and governing factors along with market attractiveness as per segments. The report also maps the qualitative impact of various market factors on market segments and geographies. Buy The Report: https://www.marketinsightsreports.com/report/purchase/06152089052?mode=su?source=openpr&Mode=RJ G
04-01-2020 | Industry, Real Estate & Constr …
Report Hive Research
Insights Into The Global Endodontic File Market (2020 To 2025) - Mergers And Acq …
Report Hive Research adds Endodontic File market report to its research database. Offering future forecast and statistics in terms of market size, share and revenue, the report provides a comprehensive picture from the global viewpoint. It explainsmultiple market dynamics through its detailed view of Market scope, Market segmentation and highlights the leading market players, thus educating on the competitive landscape as well. This brief report includes vital data such as market
05-24-2019 | Advertising, Media Consulting, …
Magnus Hive
Magnus Hive - The best marketing solution for every blockchain company!
Why the Three Musketeers took the plunge Craziness, Ambition and a combined Sense of Purpose, this is the story of Magnus Hive It was just another day in our lives as we headed to work in Mumbai, until later that afternoon when we got a call from a much sought after client, asking us to help him with a Branding and Marketing Campaign. Syed, Ashish and I had locked ourselves in a
06-17-2017 | IT, New Media & Software
Global Photo Editing Software Market Report 2017-2022
Report Hive
Report Hive Market Research Released a New Research Report of 109 pages on Title "Global Photo Editing Software Market Report 2017-2022" with detailed Analysis, Forecast and Strategies. This report studies the global Photo Editing Software market, analyzes and researches the Photo Editing Software development status and forecast in United States, EU, Japan, China, India and Southeast Asia. This report focuses on the top players in global market, like Adobe DxO CyberLink Corel ON1 MacPhun PhaseOne Serif For More Information
07-14-2016 | Leisure, Entertainment, Miscel …
Hive App, LLC
Hive - Music Discovery App Launches Major Updates
Since the launch of Hive in the App Store in April, the app has helped artists reach over 6,000 new listeners each week, with over 20% of songs being added to listeners' personal playlists for future listening. Based on the feedback received from Hive's users, some exciting changes have been made to improve their experience as well as improve the company’s ability to help early-stage artists connect with the right
Comments about openPR
We publish our press releases on openPR.de because we like people who are "open" - just like us.
Frank Obels, CEO, INCONET - Informationssysteme, Communication und Netzwerkberatung GmbH