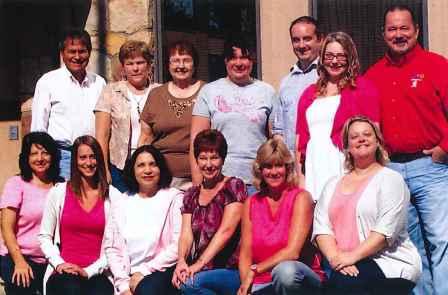 Beaver, PA - To show support for breast cancer awareness month, the Greek Catholic Union (GCU) is participating in Lee National Denim Day, a fundraiser created by Lee Jeans in support of the American Cancer Society. This is the third year of participation by GCU on a national level with a registered team. Not only are office employees at the GCU National Headquarters collecting donations, four lodges and districts across the U.S. are holding events to raise funds. “This is a great opportunity to contribute to a cause that affects so many families personally,” said Christie Petty, Fraternal Director. “It is especially encouraging to see so many of our members getting involved.” Lodges and districts were encouraged to create their own unique projects and submit the information to GCU National Headquarters. Customized advertising materials were created and ribbon pins, compliments of Lee, as well as other promotional items were sent to aid in promoting the local events. The GCU Facebook page, www.facebook.com/gcu.greek.catholic.union, has been instrumental in the awareness of not only each event, but also the effects of breast cancer as a disease. To date, the GCU has raised over $5,000 through the Lee National Denim Day event. This year employees at GCU Headquarters will wear jeans on Friday, October 5 to show their support. Results of this year’s donations, along with photos, will be released in the December issue of the GCU Magazine, a bi-monthly publication.About the Greek Catholic Union - Founded in 1892, the GCU is a Fraternal Benefits Society originally based in the Byzantine Catholic Church which now welcomes persons of all Christian faiths. The GCU provides insurance and other financial products to more than 42,000 members nationally, 70% of which reside in Pennsylvania. The GCU promotes fraternalism for its members through benevolent and community service programs, as well social and athletic events.Greek Catholic Union of the U.S.A. Christie Petty, Fraternal Director 5400 Tuscarawas Road Beaver, PA 15009724-683-3923 cpetty@gcuusa.com www.gcuusa.com

12-16-2009 | Associations & Organizations
Greek Catholic Union
Greek Catholic Union Opens Ski Weekends to Non-members
BEAVER, PA - In response to the recent cold and snowy weather, the Greek Catholic Union (GCU), announced this week the dates for their 3 ski weekends, with a change in the events’ structure to invite non-member groups from regional churches to be a part of the fun. “These weekends promote the social benefits of belonging to a fraternal organization and allow members an opportunity to introduce new friends and