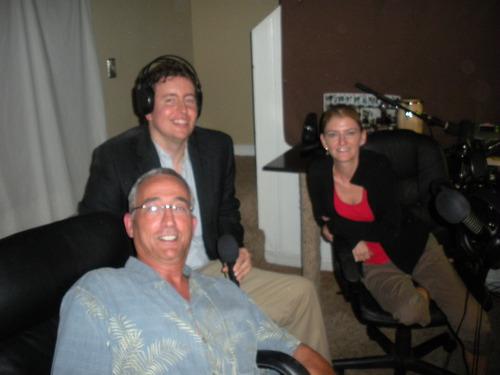 Evan Guthrie of the Evan Guthrie Law Firm in Charleston, South Carolina made an appearance on the MOD Love Radio on Thursday August 23rd 2012 in Charleston, SC. The MOD Love Radio is an internet radio show that is on the Kinetic HiFi radio network and broadcasts worldwide from Charleston, SC. The radio show is hosted by Jodi Riley and Glenn Cohen and focuses on and discusses issues dealing with all aspects of relationships of men and women. Attorney Evan Guthrie was invited on the show to discuss his perspective on relationships as a lawyer that practices family law and estate planning. Mr. Guthrie discussed various aspects of divorces, child custody, prenuptial agreements, and planning an estate. There were several questions from listeners that included how to best leave a marriage when one spouse is ready to go, but the other spouse keeps talking them out of it to when a prenuptial agreement would be appropriate in a relationship. Attorney Guthrie stayed on during the entire two hour duration of the show and contributed to discussions that touched on several aspects of family law. The law is intricately related with almost every aspect of a relationship and cannot be easily separated from any part of it. Attorney Guthrie spoke mostly about his knowledge of South Carolina law, but touched on some of the different laws of other states when listeners from far away called in to the show. There were several common misconceptions and urban myths about family law that Evan was able to clear up during his appearance on the show. Mr. Guthrie got a chance to give his opinion on many aspects of divorce and family law and the way the law interacts to shape relationships and marriage. Attorney Guthrie had a chance to talk about some of his own experiences as a lawyer and his background and how he got into the practice of law. Mr. Guthrie enjoyed his time on the air and being able to contribute to the discussion and answer questions from the audience as the time went by very fast. This was attorney Evan Guthrie’s very first media appearance as an attorney and he looked forward to many more in the future as he gains more experience in the law.Evan Guthrie Law Firm is licensed to practice law throughout the state of South Carolina. The Evan Guthrie Law Firm practices in the areas of estate planning probate wills living trust special needs trusts personal injury accident and divorce and family law and entertainment law. For further information visit his website at http://www.ekglaw.com . Follow on Twitter https://twitter.com/ekglaw Like on Facebook http://www.facebook.com/ekglaw . Avvo http://www.avvo.com/attorneys/29401-sc-evan-guthrie-3562169.html LinkedIn http://www.linkedin.com/company/2526866 Google + https://plus.google.com/107380867225921981464/about Evan Guthrie Law Firm 164 Market Street Suite 362 Charleston SC 29401 843-926-3813Evan Guthrie Law Firm 164 Market Street Suite 362 Charleston SC 29401 843-926-3813

09-13-2018 | IT, New Media & Software
K2 Enterprises, LLC
Accounting Technology Conference to Be Held in Charleston, WV
Accounting Technology Conference to Be Held in Charleston, WV Two Day Conference Offers Accountants Insights on Current and Emerging Technologies Hammond, LA— September 12, 2018 — A two-day regional accounting technology conference for accounting professionals will be held in Charleston, West Virginia on September 27-28, 2018. Participants will learn about current technology issues, emerging technologies, productivity software, and cybersecurity issues in four keynote presentations across the two day event. Attendees can also
07-24-2018 | Industry, Real Estate & Constr …
Research for Markets
Marine Container Market, Top Players are CIMC, SINGAMAS, Maersk Container Indust …
The "Global Marine Container Market Analysis to 2018" is a specialized and in-depth study of the Marine Container industry with a focus on the global market trend. The report aims to provide an overview of global Marine Container market with detailed market segmentation by services, industry vertical and geography. The global Marine Container market is expected to witness high growth during the forecast period. The report provides key statistics on
11-01-2017 | Industry, Real Estate & Constr …
Carolina Underground Solutions
Carolina Underground Solutions Expands In to Charleston, SC
Greenville, SC (October 31, 2017) – [CAROLINA UNDERGROUND SOLUTIONS] CUS, a leading underground telecommunications contractor, has been recently won two Charleston, SC based projects. CUS is providing underground fiber installation on the Honeywell campus in Charleston, SC on behalf of IES Communications. The project will involve approximately a half-mile of new in-ground fiber connecting multiple buildings with Honeywell’s main distribution facility, improving communications and data bandwidth for multiple facilities on
10-14-2013 | Politics, Law & Society
Evan Guthrie Law Firm
Evan Guthrie Law Firm Speaks At Stall High School Career Symposium In North Char …
Attorney Evan Guthrie of the Evan Guthrie Law Firm in Charleston, South Carolina attended the Career Symposium at Stall High School in North Charleston, SC on Thursday April 25th 2013. The event was similar to a career day as the high school students were matched with speakers representing different professions based on their interests. Mr. Guthrie represented lawyers and the legal professions at Stall High as part of the event.
11-29-2012 | Politics, Law & Society
Evan Guthrie Law Firm
Evan Guthrie Law Firm Makes Estate Planning And Probate Presentation For Charles …
Evan Guthrie of the Evan Guthrie Law Firm in Charleston, South Carolina made an estate planning and probate presentation at Summerville Estates Retirement Community In Summerville, SC on Friday October 5th 2012. Summerville Estates Gracious Retirement Living is an independent community that offers amenities such as home-cooked meals, game night, on-site management teams, special excursions to cultural events, day trips, museums, and other places of interest. Summerville Estates also has
10-23-2012 | Politics, Law & Society
Evan Guthrie Law Firm
Evan Guthrie Law Firm Helps As Judge For Law School Moot Court Competition In Ch …
Evan Guthrie of the Evan Guthrie Law Firm in Charleston, South Carolina took part in the CSOL 2L Moot Court Competition in Charleston, SC on Saturday September 15th 2012. The contest was an internal competition among second year law students at the law school in Charleston. The case that the students were arguing in the event was about an internet defamation case that had negative implications for one
Comments about openPR
OpenPR is clearly structured and remains true to its principle of confining itself to the essential parts. OpenPR has proven to be a very good and reliable partner to our media agency: Within the shortest time the releases are online and go down well with the media representatives. The success of OpenPR is reflected in the steadily increasing number of press releases. It is good that OpenPR exists!
Ursula Koslik, Director Marketing & PR, F+W Hamburg