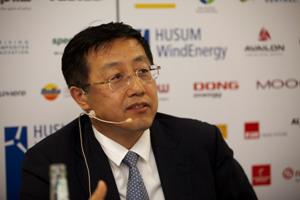 Husum, 20 September 2012. Trade and conference organisation Messe Husum organised a chaired round of discussions on the future of wind power as part of the HUSUM WindEnergy exhibition. Politicians, power suppliers and manufacturers from Germany, Denmark and China discussed some of the industry’s most important topics. Heading the talks was Professor Dr. Jochen Twele, wind power expert and lecturer at HTW Berlin University of Applied Sciences.Excess wind power for heating The Danish government intends to double wind power’s share in national production by 2020 so that it accounts for 50%. “We want excess wind energy to be used in cost-efficient electric boilers,” says wind pioneer Preben Maegaard, Director of the Nordic Folkecenter for Renewable Energies, during the discussions. This would allow wind power to be sold at at least the same price as the fuel saved. “Until now, producers have had to sell off their excess wind power to the Energy Exchange at bad prices, or switch off their turbines. Because around 105 terawatt hours of power are needed for heating in Denmark each year, district heating represents a considerable market for the absorption of renewable energy peaks,” added Maegaard.Halting the euro crisis with wind powerHans-Josef Fell, Member of the German Bundestag and Energy Spokesman for Bündnis 90 / Die Grünen, sees things similarly. “The euro crisis is an oil crisis. Oil, gas and coal imports to the eurozone are more expensive than the expansion of renewable energies, and the cost of fossil fuel is rising.” And, he says, wind power is the main driver behind renewables in Germany. “The euro crisis shows that it is much more expensive to stop the transformation of the energy sector. But if we keep that transformation going we will be able to supply Germany fully with renewable energies within only 15 years.”Creating 40,000 kilometres of new high voltage linesThe Chinese power grid was straining at the seams in 2011 because of the tremendous expansion of wind power. At 62.4 gigawatts of installed power, China is the world’s biggest wind market, and it also grew its production capacity more than any other country last year by adding 17.6 gigawatts to its tally. “To keep the wind market growing, the Chinese government is pushing forward the expansion of high voltage lines,” explained Wu Gang, Chairman, Managing Director and President of Chinese company Goldwind. “The current five-year plan envisages the completion of 40,000 kilometres of new HV lines by 2015.”Gaining acceptance for wind power through industrialisationMike Winkel, Managing Director of E.ON Climate & Renewables, believes that the wind industry faces several challenges. “Wind turbines are still mainly isolated engineering achievements. We are working with manufacturers to standardise and industrialise the processes involved, from planning, to production, to the building of plants. Industrialising these things enables us to produce in larger quantities and reduce the cost of building and operation. This is central to the success of energy policy transformation: only if costs continue to fall will we be able to keep burdens down for consumers and secure acceptance for the continued expansion of wind power.”About HUSUM WindEnergy HUSUM WindEnergy is the world’s biggest wind power trade fair and is held in Husum every two years. From 18 to 22 September 2012, around 1,200 exhibitors from 30 countries will be showing off their products and services on an area of 58,000 square metres. Organisers are expecting a record turn-out of more than 36,000 visitors from 90 countries this year. Partners to the trade fair include the international associations GWEC (Global Wind Energy Council), BWE (Bundesverband WindEnergie e.V.), VDMA (Fachverband Power Systems), EWEA (European Wind Energy Association), and Wirtschaftsförderungsgesellschaft Nordfriesland mbH.Messe Husum & Congress Husumer Wirtschaftsgesellschaft mbh & Co. KG Am Messeplatz 12-18 25813 Husum Germany www.messehusum.dePress contact Press Agency Krampitz Lea Schmitz Dillenburger Str. 85 51105 Cologne Germany Tel.: +49 (0)221 912 49949 Fax: +49 (0)221 912 49948 Email: contact@pr-krampitz.de www.pr-krampitz.de

11-12-2018 | Energy & Environment
Skylight Energy Melbourne
Skylight Energy Melbourne
Skylight Energy is the leading provider of solar energy in Australia. We specialise in high quality yet affordable renewable energy products for either your home or business. Our large selection of products consists of only the finest Tier 1 solar panels, solar inverters and home battery packs. All of our products have been approved by the Clean Energy Council, and certified for safety to the highest Australian and international standards. Whether
06-08-2018 | Energy & Environment
qyreports
Green energy
Green energy is the electricity derived from smooth assets generating minimum pollution and consists of sun photovoltaic, hydropower, wind electricity, bio-fuels and geothermal. expanded investments in era studies and improvement, supportive regulatory frameworks, extended consciousness and electricity security troubles and environmental concerns amongst others are fueling the boom in call for for clean and inexperienced energy. The report on the Global Smart Cards Automated Fare Collection System Market is a thorough
03-01-2017 | Energy & Environment
eSight Energy
Complete Energy Management from eSight Energy
Why choose eSight Energy? You can manage and reduce your energy with the eSight software by importing data into the software and managing your expectations with informative and intuitive graphs and charts. Please view the video here: https://vimeo.com/203430337 eSight Energy provides energy management solutions for use across any type of building or process. With installations across Europe, the US, Middle East and Asia, solutions are provided through a network of resellers
02-01-2011 | Business, Economy, Finances, B …
Breakthrough Energy Solutions
Breakthrough Energy Solutions
RenewAge Energy Solutions, which is based at Los Angeles in California, has just emerged as the fastest growing energy & water efficiency service provider in the country. The energy solutions and energy efficiency California offered by the company are able to reduce the electricity requirements in homes and commercial properties substantially. Because of this, the operating costs on electricity demands can be cut by as much as 30% to 60%.
11-15-2010 | Energy & Environment
Heraeus Noblelight
Plant Optimisation Saves Energy
Can the coating dry more quickly? Is it possible to reduce the rejection rate? Does the plant use too much energy? Many companies ask themselves questions like these. Energy and material costs are important considerations for industrial companies who wish to maintain or improve their competitiveness. At the same time, the optimisation of existing plant can often be the more sensible and cost-effective option over installing new plant. A
11-12-2009 | Energy & Environment
cronos imc GmbH
Reporting in Energy Trading
cronos imc combines expertise in energy trading and comprehensive reporting know how for an individual consulting service. In a few days to custom-fit and specific recommendations: This is the target of cronos imc GmbH. cronos imc provides energy traders the individual analysis of their Business Intelligence (BI) landscape. The special value lies in the vendor neutral approach. Using a checklist, all relevant information and associated processes that are needed for
Comments about openPR
We publish our press releases on openPR.de because we like people who are "open" - just like us.
Frank Obels, CEO, INCONET - Informationssysteme, Communication und Netzwerkberatung GmbH