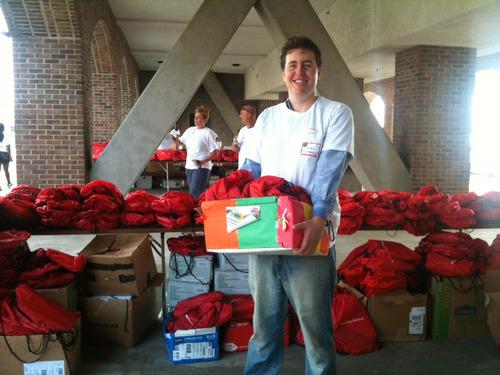 Evan Guthrie of the Evan Guthrie Law Firm in Charleston, South Carolina helped with the First Day Festival at the Liberty Square at the SC Aquarium and the Charleston Maritime Center In Charleston, South Carolina on Sunday August 19th 2012. The First Day Festival is an event to give away free book bags and school supplies to students in elementary, middle, and high schools throughout the Charleston, SC area. The festival is scheduled for the weekend before the first week of school starts. The school supplies are donated by local area businesses including local law firms. The Young Lawyers Division of the South Carolina Bar organized an effort to collect school supplies to donate to the festival. Attorneys and law firms created drop off sites for the supplies and then added them to all of the supplies for the festival. The supplies included backpacks, paper, notebooks, pens and pencils, markers and crayons, glue, scissors, and rulers. The school supply give away was only one part of the festival as there were many businesses and organizations that set up booths with information and gifts. There was also food and games for the kids that attended. There was enough school supplies for thousands of children and the supplies fit in many box trucks. Attorney Evan Guthrie helped to unload the trucks and carry the supplies to the spot they were to be distributed. Mr. Guthrie also helped organize the distribution area into two stations where the supplies could be given to the students. There was a long line of parents and students that waited before the supplies were to officially be given away. It started to rain before the official time to start giving away the school supplies. After a little bit of time , the distribution started and the school supplies were able to be given to the parents and students. Mr. Guthrie was able to hand out many backpacks to the students after they waited in line. The students were happy to receive the supplies and had smiles on their faces despite getting wet in the rain. Attorney Guthrie was happy to be able to give back to the community and participate in such a worthy event that makes such a difference in the lives of students throughout the area. Mr. Guthrie looks forward to being able to volunteer for the event in the future.Evan Guthrie Law Firm is licensed to practice law throughout the state of South Carolina. The Evan Guthrie Law Firm practices in the areas of estate planning probate wills living trust special needs trusts personal injury accident and divorce and family law and entertainment law. For further information visit his website at http://www.ekglaw.com . Follow on Twitter https://twitter.com/ekglaw Like on Facebook http://www.facebook.com/ekglaw . Avvo http://www.avvo.com/attorneys/29401-sc-evan-guthrie-3562169.html LinkedIn http://www.linkedin.com/company/2526866 Google + https://plus.google.com/107380867225921981464/about Evan Guthrie Law Firm 164 Market Street Suite 362 Charleston SC 29401 843-926-3813Evan Guthrie Law Firm 164 Market Street Suite 362 Charleston SC 29401 843-926-3813