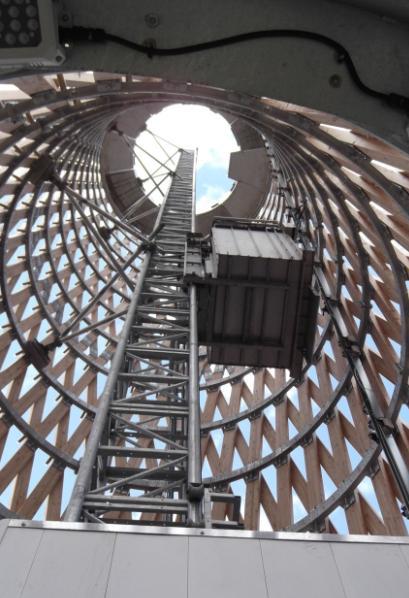 Alimak Hek have just completed installation of a permanent refurbished lift at the new 40 metre landmark sculpture at Danes Yard, part of the Strand East site close to the Olympic Park at Stratford, London E15 that complements the philosophy of sustainability that underlines the whole Strand East development.The stunning self-supporting hyperboloid sculpture is made from a lattice of glulam (glued laminated) PEFC certified Siberian Larch laths supported by a series of steel rings. The structure is illuminated at night by over 600 low energy LED lights which can be programmed for both intensity and colour to achieve a range of visual effects.The ALIMAK SE 630FC Passenger/Goods lift is required for maintenance. It was originally manufactured in 2004 for use as a temporary passenger lift for projects with Newham Council so it hasn’t travelled far as Strand East is also located in Newham. To comply fully with the Lifts Regulations, it was fully refurbished and modernised using the latest Alimak ALCII lift controller and a new car operating panel with dual illuminating push buttons and autodial telephone.The new lift is driven by rack and pinion, so all the drive machinery is carried on the top of the car and mounted to a modular structural mast. This eliminates the need for a load bearing lift shaft or a separate machine room so kept construction costs to a minimum and did not detract from the slender elegance of the sculpture. It also meant the lift fully meets all health and safety requirements.Craig Brown, Industrial Lift Manager for Alimak Hek in the UK commented, “Being able to refurbish a pre-used lift not only extended the life of the unit and minimised costs, but meant that once again we were able to deliver a solution that met all the stringent demands of our customer.” Strand East is the second biggest private investment in the area after the Olympic Park and will be larger than the Olympic Village. This will be the first major British development for LandProp (part of the Inter Ikea Group) the company's investment arm and will be a 10 year project to regenerate an area which has been neglected for some considerable time.More about Strand East LandProp Holding submitted a hybrid planning application for Strand East, the company’s first major UK investment, to London Thames Gateway Development Corporation. It was validated by the London Borough of Newham on 28 February 2012. The developer’s plans, prepared by architects Arc-ML, will transform the 26 acre, near derelict site just south of the Olympic Park into a vibrant, waterside city neighbourhood. The plans will deliver 1,200 new homes (40% of which will be family oriented with three or more bedrooms), 620,000 sq ft of space for businesses, including local shops, cafes, restaurants and other community facilities, together with a 350 bedroom hotel. Around 25% of the development will be open space, including a riverside park that will run along the western edge of the site overlooking the River Lee Navigation. The planning received full approval from LTGDC on 18 July 2012.More about Alimak Hek Alimak Hek is the world’s leading supplier of mast climbing equipment and added value services for both temporary and permanent installations providing the most cost efficient, reliable, and flexible vertical access solutions for people and materials in the construction and general industry. Alimak Hek operates wholly owned sales and rental companies in some 20 locations around the world, and has over 50 representatives in other locations.Technical information Mark Bednall Sales Manager Alimak Hek e-mail: Mark.Bednall@alimakhek.co.uk Tel: 01933 354 700Colin Caldicott Ultimedia Public Relations 60 Station Road, Blunham, MK44 3NX www.ultimediapr.co.uk e-mail: colin@ultimediapr.co.uk Tel: 01767 601470

03-21-2012 | Industry, Real Estate & Constr …
Alimak Hek
Alimak Hek and CAS rise to new heights on St George’s Wharf Project
Brookfield Multiplex has installed a high speed Hoist and Common Tower Access System which is now fully operational at The Tower currently under construction at 1 St George Wharf, London. This is a St George South Limited project and this tower will reach a height of 185m making it one of the tallest residential building in Europe. Brookfield Multiplex Europe proposed using this type of system and Alimak Hek Ltd and
02-10-2012 | Industry, Real Estate & Constr …
Alimak Hek
New Lightweight Hoists from Alimak Hek gives Competitive Edge for smaller buildi …
Alimak Hek has launched two new lightweight transport platforms and material hoists which have been specifically designed for smaller building projects which make them the perfect choice for scaffolders, building companies and rental/hire companies supplying the construction industry. For more than 60 years Alimak Hek have been one of world’s leading supplier of rack and pinion industrial hoists for a whole range of industries from construction and wholesale
Comments about openPR
OpenPR is clearly structured and remains true to its principle of confining itself to the essential parts. OpenPR has proven to be a very good and reliable partner to our media agency: Within the shortest time the releases are online and go down well with the media representatives. The success of OpenPR is reflected in the steadily increasing number of press releases. It is good that OpenPR exists!
Ursula Koslik, Director Marketing & PR, F+W Hamburg