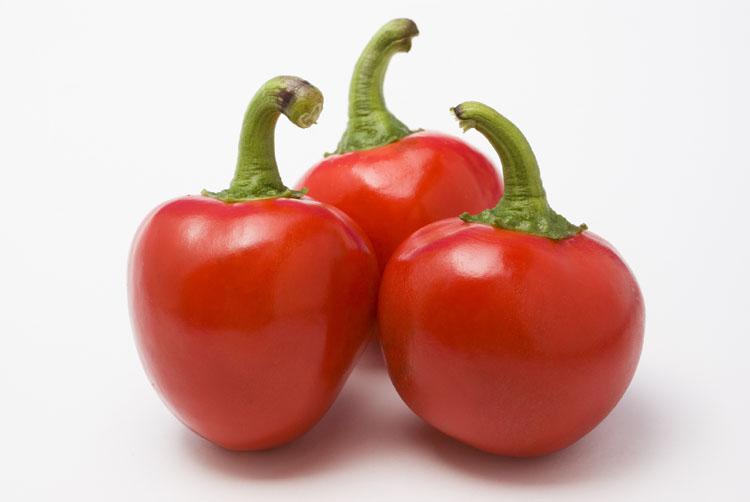 Chilli specialist Joanna Plumb hit national television screens once again this week when Edible Ornamentals was featured on Gordon Ramsay’s new ‘Ultimate Cookery Course’ programme on Channel 4.Gordon Ramsay is a great fan of chillies and the programme televised on Wednesday evening looked at ways chilli can add a real zest to a range of dishes. The programme also looked at growing and storing chillies to get the maximum flavour, so the film crew visited Cherwood Nurseries in Chawston during the summer to get advice from Joanna Plumb who is now recognised as one of the UK’s foremost experts on chillies.“The film crew wanted classic shots of red chillies,” said Joanna, “but they visited after a very cold Spring which had delayed the ripening of this year’s crop, so they were still green. Fortunately one of our regular customers had overwintered their chilli plant, which we borrowed and it had some really nice ripe chillies. That plant was the star of the day, much to the relief of the film crew.”The programme also introduced Chipotles, which are currently taking America by storm. Chipotles are Jalapeno chillies which have been slowly dry smoked over wood chips.Joanna added, “We have started smoking our own Chipotles here on site using really fresh chillies and authentic Mesquite chippings. This not only ensures they retain the heat of the chilli but can be used in a range of recipes to give a distinctive smoky flavour.”Joanna supplies fresh chillies to Fortnum and Masons, Harrods and leading London restaurants, and has previously appeared on numerous radio and television programmes, including ‘Hairy Bikers’, ‘Ready Steady Cook’, the BBC Good Food Show, BBC 2 series ‘Economy Gastronomy’, The One Show’ and Countrywise.For those who missed Gordon Ramsay’s Ultimate Cookery Course, the shows can still be seen on Channel 4’s ‘On Demand’ service. Visit www.ow.ly/dCmjoEdible Ornamentals is Bedfordshire’s leading producer of high quality chillies and a range of fresh vegetables that visitors can pick straight from the plant. http://www.edibleornamentals.co.ukEdible Ornamentals has also partnered with Virgin and offers special half day Chilli Experience days. http://www.virginexperiencedays.co.uk/chilli-tour-and-tasting-for-twoColin Caldicott, Ultimedia Public Relations 60 Station Road, Blunham, MK44 3NX Tel: 01767 601470 e-mail: colin@ultimediapr.co.uk

02-20-2013 | Leisure, Entertainment, Miscel …
Edible Ornamentals
Bedfordshire’ Chilli specialist awarded £40,000 grant from BRCC to develop ne …
Bedfordshire’s celebrated chilli specialists, Joanna and Shawn Plumb of Edible Ornamentals, have been awarded a major grant in excess of £40,000 to create an Edible Kitchen. The grant was awarded through the Rural Development Programme for England (RDPE) by the Greensand Ridge Local Action Group which is managed locally by Bedfordshire Rural Communities Charity (BRCC). This new facility will open in early May to provide refreshments and light lunches
02-24-2011 | Leisure, Entertainment, Miscel …
Edible Ornamentals
Edible Ornamentals wins Grower of the Year Award
Bedfordshire’s chilli guru, Joanna Plumb has just received yet another accolade as ‘Grower of the Year 2011’, when her Chawston based nursery Edible Ornamentals won the award for the best Trade Marketing Campaign of the Year. Over 500 professional growers from across the UK attended the award ceremony which was held at London’s Lancaster Hotel and hosted by TV celebrity Paul Ross. Arranged by Horticulture Week, and sponsored by national
10-04-2010 | Fashion, Lifestyle, Trends
Edible Ornamentals
Prince Charles is keen chilli fan according to Tom Parker Bowles
Radio presenter, Daily Mail columnist, food author and general Good Food aficionado Tom Parker Bowles couldn’t resist visiting Bedford’s chilli specialist Edible Ornamentals. Tom had invited Joanna Plumb to be a guest on his Sunday afternoon Food and Drink programme on LBC, and he was so impressed with Joanna’s enthusiasm and passion for fresh vegetables, he had to visit the nursery and sample the freshly prepared delights of the Edible
09-22-2010 | Fashion, Lifestyle, Trends
Edible Ornamentals
Bedfordshire Chilli Growers hand-picked by Harrods
Chawston-based specialist chilli growers, Edible Ornamentals have been chosen to supply their seasonal range of chillies as part of Harrods Festival of British Foods Fortnight, which will be featured at their Food Halls and Restaurants in Knightsbridge until 3rd October. Chef Valentine Warner, who is best known for his television programme “What to Eat Now” is partnering Harrods for the event. He is renowned as a champion of small, British,