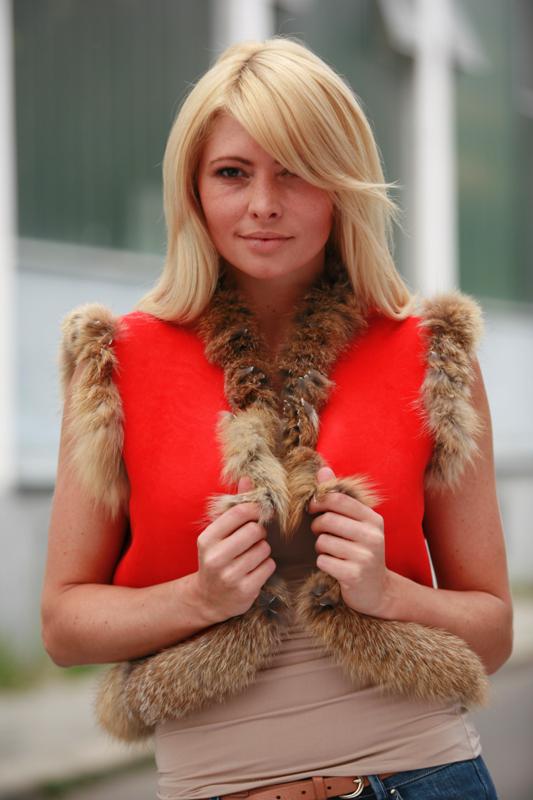 A Contradiction or a Longterm Fashion Trend? Press-Release, Munich, 5th September 2012 Long before Lady Gaga and Dan Matthews began engaging in their public social-media dispute in regards to the ethics behind wearing fashionable furs, the German fur manufacturer of the "Loringhoven GmbH" took a stance on the subject: Many years ago this Munich-based company decided that while their fur collections must be highly fashionable, they also had to meet ethical expectations and demands of today's customer zeitgeist. In the light of this, Loringhoven has not previously manufactured any of their products from either caged animals or animals which were hunted solely for their furs' sake. In fact, purely ethically speaking, Loringhoven's product line comes easier than many other common place clothing articles such as belts or shoes. According to Nickolas von Loringhoven, the original founder of the Loringhoven GmbH, it is extremely difficult for the fur industry to find new and willing customers in today's anti-fur and pro-animal market. Many customers are rightfully concerned with the perceived animal abuse that often goes along with fur products. Others even fear the negative stigma one encounters, when wearing fur. In order to successfully deal with these righteous customer concerns and provide an overall more ethical product, von Loringhoven goes on to explain, that Loringhoven GmbH has started some kind of a revolution in fur production! This revolution is taking place by Loringhoven manufacturing only fur products almost so-called "vegetarian". Using only raw materials that are essentially by-products of natural selection in nature itself, von Loringhoven hopes to produce fashionable furs that are so ethically and qualitatively superior that they would re-establish a new standard within the fur industry. The Loringhoven GmbH is importing its raw furs from the far away green pastures of New Zealand, which is home to not less than 40 million sheep! As these outdoor animals are subject to natural selection, a few of the weaker new born sheep do to not live through their first winter in New Zealand's hard climates. The animals' pelts, products of an entirely natural process without human interference, are then collected. A second source of raw materials for Loringhoven is the possum which was brought to New Zealand unnaturally about 150 years ago. Finding itself without any natural enemies within this island nation, the possum multiplied uncontrollably to an estimated number of some 70 million and destroyed many parts of New Zealand's native flora and fauna. Rata-Trees, Kea Birds as well as the flightless Kiwis are all part of the hungry possum's menu leading to their near extinction on many parts of New Zealand. New Zealand's environmental protection agency believes that the possum's overpopulation has reached an estimated 95%. In other words New Zealand's sensitive eco-system can only handle 5% of the current possum population. Thus, government-sanctioned hunting of these animals is supported by many environmental organizations. According to Loringhoven the disposal for these environmental hazards produces many possum-pelts. Only a limited number constituting the qualitatively best pelts can then be utilized for the high-quality line of products. Loringhoven believes further that possums are among the most valuable furs in the world right now. According to New Zealand's Otago University possum furs is superior to even Cashmere in all its physical aspects and only Polar Bear and Snow Fox fur contains more warmth. Meanwhile a small community of fans has gathered around von Loringhoven who is both, the avant-garde in fur fashions and the maker of ethically and environmentally sound product lines. Commenting jokingly, von Loringhoven discloses that the Loringhoven GmbH hopes to see Lady Gaga in more provocative yet ethically more sound fur products in the future. Loringhoven quips, "As a small beginning, we sent our exclusive and limited Dirndl-Bolero to her management". The Loringhoven GmbH stands for "Furs Made in Germany". For the past forty years, the Loringhoven GmbH has been a proud producer of fur and leather items manufactured with exclusive ethically correct raw materials. All product lines are manufactured in Germany's southern state of Bavaria. With the introduction of a new label "Loringhoven-OekoFur", the Loringhoven GmbH has taken the next step and is essentially bidding farewell to the furs stemming from life stock sources. Offering only and exclusively "vegetarian" adjusted product lines based on ethics and environmental concerns, it is the Loringhoven GmbH's intention to take a stand against common misconceptions that concerning today's fur industry. Loringhoven GmbH - OekoFur Address Theo-Prosel-Weg 13, 80797 Munich Germany Fax. +49 (0) 89 21 555 661 – 9 Loringhoven GmbH Andreas Zobel von Giebelstadt Phone 0049 89 21 555 66 11 E-Mail: info@loringhoven.de

08-03-2018 | Science & Education
MakeMyAssignments.com
MakeMyAssignments.com provides customized help in New Zealand
We all cherish the countless memories of school life and college life. It reminds us of the fun-filled, stress free days. But one thing that bothers every child during this blissful tenure is the workload that is infused on them. Many a times, the amount of work is unreasonably high that it totally takes away all the frolic and induces a sense of helpless and a will to escape. Students
09-19-2017 | Industry, Real Estate & Constr …
Orbis Research
Retailing in New Zealand
Summary This report helps to analyze competitive developments such as joint ventures, strategic alliances, mergers and acquisitions, new product developments, and research and developments in the Retailing in New Zealand Description Retailing in New Zealand experienced a positive performance in 2016, driven by the strong demand for domestic and international goods and services. This owed much to continuing economic recovery, the improvement in employment and the rise in migrants, especially in major cities
09-13-2017 | Science & Education
GlobeMetrix
Global Lixisenatide Market 2017- Sanofi-Aventis, Zealand
The Report entitled Global Lixisenatide Market 2017 analyses the crucial factors of the Lixisenatide market based on present industry situations, market demands, business strategies adopted by Lixisenatide market players and their growth scenario. This report isolates the Lixisenatide market based on the key players, Type, Application and Regions. The Lixisenatide industry research report mainly focuses on Lixisenatide industry in global market. The major regions which contribute to the development of Lixisenatide
09-12-2017 | Fashion, Lifestyle, Trends
Market Research Future
Manuka Honey Market Key Players: Comvita Limited (New Zealand), Watson & Son Ltd …
Market Research Future published a Half Cooked Research Report (HCRR) on Global Manuka Honey Market which is estimated to grow more than 4.3% during the period 2017-2023 Competitive Analysis- The major key players in Manuka Honey Market are Comvita Limited (New Zealand) Watson & Son Ltd (New Zealand) Manuka Health (New Zealand) API Health (New Zealand) Wedderspoon (New Zealand) Mossops Honey (New Zealand) Cammells Honey (New Zealand) Manuka manufacturers across various regions follow the strategy of improving their existing product
01-24-2013 | Logistics & Transport
BLIP Systems
Bluetooth System Measures Progress in New Zealand
Sophisticated Danish technology, deployed and operated by Beca, is now being used by the New Zealand government to demonstrate the benefits of investment in New Zealand’s transportation network. The system, imported from Blip Systems in Denmark, involves tracking anonymous Bluetooth devices such as cell phones, headsets, in car navigation systems, as they travel in New Zealand, and using this information to identify travel times and route preference. The Bluetooth Address´
11-24-2010 | Industry, Real Estate & Constr …
Dreamscape Design
New Zealand Mine Searches For Survivors
Pike River mine (in New Zealand) where 29 people have been missing since an explosion Friday, is being searched by a new robot after the first one broke down. Engineers will soon complete the drilling of a 15cm (6in) wide test and 160m-long shaft that will allow them to assess the air quality. Dangerous levels of methane and carbon monoxide is suspected to be in the mine, which has hampered all
Comments about openPR
9 o'clock: discuss press release with client, 10 o'clock: submit release to openPR, within the briefest possible time release is published and displayed in a prominent place on openPR.de. I am thrilled!
Zehra Spindler, Calypso Now! - Communication Agency