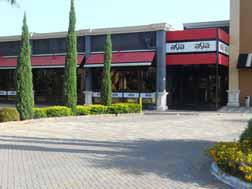 BOCA RATON, Fla. – Asia Restaurant, a popular “Sushi-Wok-Grill” eatery within Fountains Center at 7600 West Camino Real in Boca Raton, has announced plans to expand into on- and off-site catering for small intimate parties or large, lavish events and anything in between. In addition, owner/restaurateur Bari Roth is renovating the outdoor garden patio just in time for the season. Renovations have begun and are expected to be completed by November 1st.The restaurant opened in the seven-building office and retail park in 2009. “Business has been good here. But now, because of the major improvements that the new landlord is making to the property, new tenants are constantly moving in and old ones are renewing their leases. So I am optimistic that Fountains Center will be booming,” Roth said.The restaurant’s location, just off Powerline Road between Palmetto Park Road and S.W 18th Street in Boca Raton, is convenient for residents in the surrounding communities, as well as for the hundreds of people who work in offices at Fountains Center or elsewhere in the area.Roth said there has also been a need to extend Asia’s lunch menu beyond its Chinese and sushi offerings to a new menu of “Deli by Day,” along with a selection of appetizers, overstuffed sandwiches, fresh chopped salads, and favorites such as a geisha roll, chicken satay, kobe burgers and a wokwich. The new menu is in effect and being well received.In addition to indoor seating, Asia’s outdoor seating overlooks the rest of Fountains Center and its lush garden courtyard with fountains, foot bridges and walkways. “It’s a beautiful setting that is very pedestrian friendly. There is also plenty of parking,” she pointed out.Asia Restaurant is open from 11:30 a.m. until 10 p.m. Sundays through Thursdays and closes at 3 p.m. on Fridays in observance of the Sabbath. For further information about Asia Restaurant, call (561) 544-8100. For information about leasing at Fountains Center, call (561) 488-0877.The Adler Network is a full-service public relations firm established in 1978 in South Florida.6428 NW 64 Way, Boca Raton, FL 33496

You can edit or delete your press release Asia Restaurant at Fountains Center Renovates Garden Patio, Expands Into Catering here

11-30-2020 | Health & Medicine
Allied Market Research
Asia IVD Market
According to a new report published by Allied Market Research, the Asia Pacific In-vitro diagnostics market was valued at $12.9 billion in 2015, and is expected to reach $19.0 billion registering a CAGR of 5.6% during 2016 to 2022. The report offers a detailed analysis of the key segments, top investment pockets, changing dynamics, market size & estimations, and competitive scenario. Download Free Sample Report @ https://www.alliedmarketresearch.com/request-sample/1256 The Asia-Pacific IVD market is
03-21-2019 | Business, Economy, Finances, B …
RAMPF Group
RAMPF Korea – Producing in Asia for Asia
Joint Venture for the Asian markets – The international RAMPF Group has realigned the cooperation with its long-standing partner Orient Dosiertechnik from Korea with the founding of RAMPF Korea Co., Ltd. The new company based in Hwaseong City is developing and producing mixing and dispensing systems specifically for the Asian markets. Within the framework of the new joint venture based in Hwaseong City, mixing and dispensing systems are being developed and
01-23-2019 | Business, Economy, Finances, B …
International Property Media
LIXIL Asia Presents Asia Pacific Property Awards
Through its power brands GROHE and American Standard, LIXIL Asia signs a three-year deal to become the Headline Sponsor of the Asia Pacific Property Awards from 2019 until 2022. 23rd January 2019: The International Property Awards, first established in 1993, are open to residential and commercial property professionals from around the globe. They celebrate the highest levels of achievement by companies operating within the architecture, interior design, real estate and property
12-12-2014 | IT, New Media & Software
Model Engineering Solutions GmbH
MES: Expansion in Asia
Berlin, November 24, 2014: Model Engineering Solutions (MES), the Berlin-based specialist for model-based software development, has significantly expanded its business in Asia. In recent years, MES has built up a network of local partners in Japan, Korea, China, and India in order to benefit from the growing market and increasing interest in model-based development and ISO 26262 in Asia. Asia: Driving force in the automotive industry The automotive industry continues
11-03-2011 | Advertising, Media Consulting, …
Clarion Events Asia
Undersea Defence Technology Asia, UDT Asia 2011
Latest Military Diving Technologies featured in UDT Asia Equipping Asia’s navies with the latest diving technology for asymmetric warfare and operations SINGAPORE, 17 October 2011 - Naval diving and underwater special operations is a field that is seeing increased attention and investment amongst navies in Asia. Units such as the Indonesian Navy‟s KOPASKA, the Republic of Singapore Navy‟s Naval Diving Unit (NDU), the Royal Malaysian Navy‟s PASKAL are increasingly utilising specialised equipment for conducting
06-10-2011 | Politics, Law & Society
Clarion Events Asia
UDT Asia 2011
Clarion Events hosts the Undersea Defence Technology (UDT) Asia 2011 conference and exhibition to bring senior naval and industry personnel together to cover underwater developments in the region Singapore, May 30 – Clarion Events is hosting UDT Asia on 30 November – 1 December 2011. The event brings together the undersea defence community in Asia, featuring top regional naval speakers, who will be addressing the latest underwater requirements for Asian navies. According
Comments about openPR
I can't but agree to the positive statements about your portal: easy to use, clear layout, very good search function, and quick editing!
Jens O'Brien, Borgmeier Media Communication