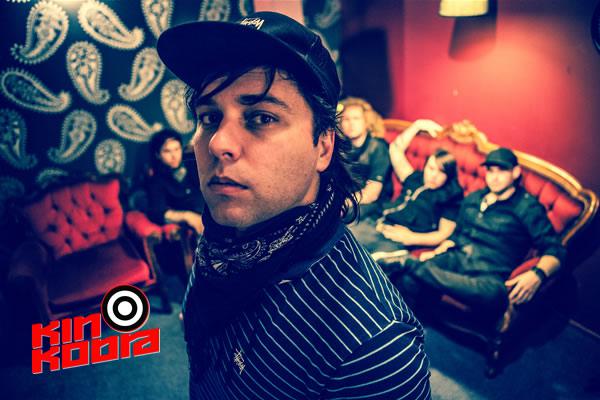 The Dutch rock band Kinkobra has released their new SINGLE & VIDEO "OK" worldwide over AWESOME KICKASS RECORDS on the 24th of august. After only three months, they convinced 3FM dj Annemieke Schollaardt to let them perform live in her show. Not much later, joining a Demo contest from Radio 538, this firmly established their potential. Next a live webcast for RedBull in cooperation with MTV followed, as well as an interview/ showcase on MTV NL television. Competitions are working out real well for KinKobra. For example winning CortonVille, a concept of DJ Erik Corton. During an appearance on the Dutch radio/tv show “Ekdom in de Nacht” KinKobra once again proved to be a band with an honest and undeniably live sound. The audience gave KinKobra a well-earned 9! KinKobra kicked ass in Giel Beelen’s “Nachtegiel” 3FM radio/tv show. Giel Beelen, a very influential Dutch radio dj, was very positive about KinKobra’s performance and astounded by their live sound. Giel Quoted: It is one thing to produce a sound in a studio, live you have to deliver and play it like it is. Well done Gentlemen! They played over 500 national and international gigs on stages like Paradiso, de Melkweg, 013, Patronaat, Oosterpoort, Atak,Luxor live, Het Bolwerk, P60, Sugar Factory and others. They’ve supported band like Triggerfinger, Anathema, Royal Republic,.. The single „ OK“ is recorded and produced by Award Winning Producer Oscar Holleman, known for the success of, for example, Within Temptation, Heideroosjes, Vengeance , Gorefest , Halloween ,at the RS 29 Studios. The Video is produced as an cooperation from Winant Veldhuisen and Joris Hendrikse. KINKOBRA: Pascal Molenaar Etienne Baegen Kevin Tsie Daan Boon www.kinkobra.com Red Rock Management is a German Booking, Management & Promotion Agency for a number of international artists with exceptional musical talent and impressive live skills. Red Rock Management was founded in 2004 to start in particular regional and national artists and performance opportunities to gain the necessary national awareness. Since then, the agency has continuously developed and has been a reliable and competent partner for our artists and organizers throughout Europe. RED ROCK MANAGEMENT Annett Hinze & Richard Koning GbR Glünderstr. 3a 30167 Hannover kinkobra@redrock-management 0511-8492255 www.redrock-management.de

News-ID: 234349 • Views: 4257
Comments about openPR
Your portal is fast, simple, and easy to use. Others may have more functions but they also demand more editing time, you have to preformat the text in order to achieve a good result etc. I think openPR is really fantastic!
Andreas Knepper, wallmedien AG