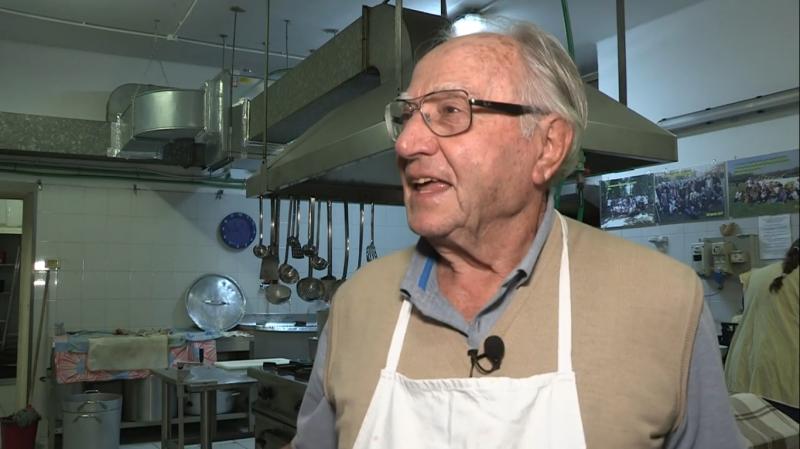 Dino Impagliazzo 'The chef of the poor" dies in Rome, Italy

Dino Impagliazzo, also known as 'the chef of the poor', died yesterday 25 July in Rome, Italy. He fed over 300 people every day in Rome's most famous railway stations together with the volunteers who had been following him for years. A personality in the Catholic and social world, he was a historic member of Chiara Lubich's Focolare Movement and the Community of Sant'Egidio. He was born on the island of La Maddalena 91 years ago, but had lived in Rome all his life. He returned to his island every summer to meet up with his lifelong friends and enjoy fishing.In 2020 Dino Impagliazzo was awarded the Honour of Merit of the Italian Republic by Head of State Sergio Mattarella at the Quirinale. He was awarded the honour as part of a group of 32 "heroes of our time" who were honoured for their high level of commitment in various fields, setting an example for the country.The funeral will be celebrated on Tuesday 27 July at 11:00 a.m. in the church of Santa Maria in Trastevere in Rome. The ceremony of the funeral will be available on live streaming video on site: https://youtu.be/STdSCuwWddQ .He was the founder and president of the RomAmor Onlus association, which is primarily concerned with feeding the homeless and destitute on the streets of Rome, but also with the social rehabilitation of people in difficulty. His life has been dedicated to the weakest and the last, and he has made countless trips to Eastern Europe, still under the Soviet regime, and after the fall of the Berlin Wall, to bring food supplies for the poorest. He met countless people around the world and helped people in the Rebibbia prison in Rome, the shanty towns, the displaced, the earthquake victims, like the beggar on the doorstep, who Dino always helped with candour and love.Dino leaves behind his wife Fernanda, his life-long companion, who have always been involved in social work: they are the parents of Marco Impagliazzo, president of the Community of Sant'Egidio, and of three other brothers who have always been involved in social work in various ways, thanks to their parents' example.Dino Impagliazzo has given many speeches in schools and universities on the meaning of helping the weakest: his last public speech was in 2020 at the LUMSA University, where he talked about his life experience in helping others. In 2018 Dino received the prestigious 'Cartagine 2.0 International Award' in the 'Solidarity' section, destined for those who have contributed in Italy and abroad to the diffusion of culture and knowledge in various sectors. In 2016 the Chef of the Poor met Pope Francis, greeting him on behalf of all the homeless of Rome and inviting him to serve the soup kitchen organised daily by Dino and the volunteers of the RomAmor Onlus Association of which Dino is president.There was also fun along with social commitment with a visit from Chef Rubio to Dino, with an amusing gag between the sprightly ninety-year-old and the well-known television personality who has always been socially committed. "Giovanni Impagliazzo, a member of the Sant'Egidio community and Dino's son, commented on the occasion of the meeting with Chef Rubio: "You can do great things with 'waste' - with food, with the waste of places, like the 'waste of people' that in reality are of enormous value, as in Dino's case, for all that he carries out".Thousands of interviews were given to Italian and international television, radio and newspapers, which over the years had discovered the elderly, good-hearted hero. Dino allowed himself to be interviewed, even with pain at the fact that he did not like spreading his work, but at the same time he renounced the importance of communicating to the world the idea of loving one's neighbour, especially the last ones, claiming that: 'we are all children of the same Father'."Dino Impagliazzo, also known as 'the chef of the poor', has left us. A 'modern-day hero' who dedicated his life to helping the weakest and most fragile people. Rome is close to his family and loved ones," Mayor Virginia Raggi wrote on Twitter. "Great sadness. He leaves us a man who dedicated his entire life to people in need. A man who knew how to love and help everyone. His example is and will remain a lesson for everyone. I send my heartfelt condolences to his family," Lazio Region President Nicola Zingaretti said in a statement.Meet Rome’s 90-year-old ‘chef of the poor’ https://www.reuters.com/video/watch/idOVBZHDT2FCBS News: 90-year-old man known as "chef of the poor" dedicated to feeding the homelesshttps://www.youtube.com/watch?v=xEqp5NWi8iwAssociazione RomAmor Onlus http://www.romamor-onlus.com/RomAmoR OnlusVia Carlo Fea 4, 00161 Romainfo@romamor.orgRomAmor Onlus association, is primarily concerned with feeding the homeless and destitute on the streets of Rome, but also with the social rehabilitation of people in difficulty.

06-21-2021 | Advertising, Media Consulting, …
Giulio Gargiullo
Discovered One of the Largest Etruscan Buttes in Central Italy: Opening to the P …
An archaeological and historical treasure discovered in the foundations of the fasma village of Celleno (VT), named one of Italy's most beautiful ghost towns by The Guardian. A recently discovered Etruscan tank, one of the largest in Central Italy, according to experts. The enormous 4-metre tank was used by the Etruscans as a water reservoir, and later in the Middle Ages it was used to throw away rubbish and unused