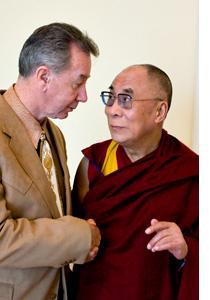 Tom Mower has chosen Whole Child as his charity and cause for his business Sisel International.Provo, Utah, August 20, 2012 - Tom Mower joins efforts with the Dalai Lama. Tom Mower has chosen Whole Child as his charity and cause for his business Sisel International. Support from the Dalai LamaIn February, 2010 the 14th Dalai Lama, winner of the 1989 Nobel Peace Prize and the spiritual leader of Tibet, traveled to Los Angeles to support the global work of Whole Child. The Dalai Lama joined Whole Child to launch a new initiative to create awareness of the plight of the estimated 145 million orphaned children worldwide.At the Whole Child International luncheon the Dalai Lama engaged the audience in a discussion on the needs of vulnerable children, and the connection between nurturing and compassion. During the luncheon, The Dalai Lama received the first Whole Child International Humanitarian Award. This award honors one visionary global leader driven by a passion to elevate the lives of vulnerable populations; Whole Child International Humanitarians are recognized by their innovative and unyielding work to solve our most pressing global problems.On February 21, 2010 at the Gibson Amphitheatre, the Dalai Lama presented a public address “Cultivating Compassion and the Needs of Vulnerable Children,” his first in Los Angeles since 2006. They were joined by a musical performance by Sheryl Crow. At the Gibson, the Whole Child International Champion Award, honoring an exceptional individual noted for his or her dedication to improving the lives of vulnerable children globally, was presented to Whole Child supporter Tom Mower, Sr., founder and Chairman of the Board of SISEL International.While in Los Angeles, the Dalai Lama was interviewed by Larry King in Beverly Hills. The interview included the Dalai Lama speaking on the need to address the emotional needs of children around the world.Tom Mower enjoys his friendship with the Dalai Lama and is humbled to know for the first time in history the Dalai Lama has endorsed a charity which is Whole Child. Together Tom Mower, Karen Gordon, and the Dalai Lama are enriching children’s lives all over the world.To learn more about Tom Mower Sr.’s company Sisel International visit http://www.siselreviews.comDan Block 123 N. Alpine rd. Rockford, Il 61107 815-980-0664 Skype block6525 Danblock317@gmail.comAbout SISEL International, LLC: SISEL International was founded in 2006 by Tom Mower, and his son Tom Jr., with the mission to create the most powerful personal care products and dietary supplements in the world. The term SISEL (pronounced "sizzle") is an acronym for; Science, Innovation, Success, Energy, and Longevity. These are the key foundational principles for our company.At SISEL, we research the research to find exciting new discoveries in modern science, and bring to market spectacular products unlike the world has ever seen. We are committed to the use of evidence-based nutraceutical ingredients, known to be of scientifically-proven biological value, in the most concentrated strength and form possible, combined with other synergistic ingredients to achieve maximum results.Contact: Dan Block SISEL International, LLC 123 N. Alpine rd. Rockford, IL 61107 815-980-0664 Danblock317@gmail.com http://www.siselreviews.com

02-28-2018 | Arts & Culture
Doug Carnine
Dalai Lama, Kirin Bedi, And Award Winning Author Doug Carnine Agree That Mindful …
In a recent news article on the OneIndia website, the Dalai Lama praised Kiran Bedi, BJP's chief ministerial candidate, for the introduction of a program of meditation in Tihar jail. While this may seem to be somewhat unconventional, it is in fact a powerful strategy for making improvements in the lives of prisoners. Nearly all of us are aware of the benefits of mindfulness and meditation, but we seldom think
09-15-2011 | Arts & Culture
Divine Arts Media
Divine Arts Media To Release in Sixth Book In New Series THE SACRED SITES OF THE …
[Los Angeles, CA/USA] Divine Arts Media announces the October 2011 release of THE SACRED SITES OF THE DALAI LAMAS by Glenn H. Mullin. This book remarkably mixes 100 stunning color photographs of Tibet’s most sacred power spots of the Dalai Lamas with text on the historical relevance of these sites in the unfolding of Tibetan Buddhism. Appearing throughout the book are brief biographies, inspirational quotations and passages from the writings of
06-02-2010 | IT, New Media & Software
Managing Editor Inc.
MEI Spotlights Distribution Partner Informática Dalai SA de CV
Jenkintown, PA (June 1, 2010) — Managing Editor Inc. (MEI), an Adobe premier development partner and a leading provider of software for the publishing industry, today released a partner spotlight profiling Latin American distributor Informática Dalai SA de CV. The report highlights Dalai’s success in delivering the vjoon K4 Cross-Media Publishing Platform and MEI’s Page Director® ALS, Page Director CLS, AdForce® and ClassForce® solutions to its market, which
10-26-2009 | Associations & Organizations
Choe Khor Sum Ling - Tibetan Buddhist Meditation & Study Center, Bangalore
Science & Buddhism Collide: a talk on relation between Buddhism & Science to be …
Buddhism has had a long history of intense probing into the true nature of reality both at physical and non-physical level. In this objective and the methodological rigor it shares a lot with modern science. Recently there has been rapidly growing interest among scientists to conduct research into Buddhist theories and practices especially those related to the mind and its development. The Buddhists, who likewise have shown great interest in
07-01-2009 | Associations & Organizations
Choe Khor Sum Ling - Tibetan Buddhist Meditation & Study Center, Bangalore
Choe Khor Sum Ling celebrates His Holiness the XIV Dalai Lama’s birthday with …
Teaching on Wisdom & Compassion by Venerable Tenzin Gyurme Rinpoche, on July 5, 2009 His Holiness the XIV Dalai Lama, Tenzin Gyatso, is a spiritual leader of Tibetan Buddhism, a noted public speaker he travels extensively around the world giving teachings and public talks promoting human values and religious harmony and understanding. His tireless, efforts on behalf of human rights and world peace have brought him not only a number of
04-06-2007 | Science & Education
Foundation for Buddhist Studies
Dalai Lama to Attend Buddhist Conference in Hamburg
International Congress to Address Role of Women in Buddhism University of Hamburg, July 18, 19 and 20, Campus von-Melle-Park, Edmund-Siemers-Allee 1 (April 3, 2007) The Fourteenth Dalai Lama has confirmed his participation as a keynote speaker at the International Congress of Buddhist Women, to take place in Hamburg from July 18 through 20. The main topic of this pan-Buddhist conference is women’s rights to full ordination in the Tibetan Buddhist monastic order,
Comments about openPR
9 o'clock: discuss press release with client, 10 o'clock: submit release to openPR, within the briefest possible time release is published and displayed in a prominent place on openPR.de. I am thrilled!
Zehra Spindler, Calypso Now! - Communication Agency