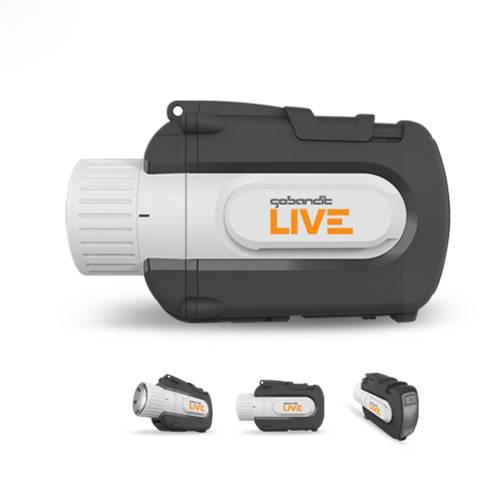 Since June 2012 the newly announced action cam gobandit LIVE is available. By then also offered on the newly launched gobandit webshop – a solution provided by RHIEM.Voerde, 14th August 2012 – gobandit, a power player and innovative manufacturer of high definition action video devices, announced a technical innovation at the 2012 Consumer Electronics Show in Las Vegas, gobandit LIVE. The first action cam in the world to integrate wireless connectivity, gobandit LIVE allows adrenaline junkies to view, edit and share their videos with their smartphone instantly. While RHIEM is supporting gobandit already with fulfillment, print & packaging production and assembly of previous product generations, gobandit and RHIEM have now launched the new gobandit webshop. This online shop is based on RHIEM’s proven shopping cart technology and is seamlessly integrated into www.gobandit.com. It offers gobandit’s passionated customers across Europe the gobandit product portfolio including accessories for purchase, in the meanwhile opening a whole new sales channel for gobandit."Our new high-definition gobandit LIVE is completed with the innovative free smartphone app STUDIO that allows our customers to individualize the videos by adding performance data and share their experience with their friends on social networks. It's the perfect video solution for any thrill-packed adventure. gobandit excels where others fall short", said Aleks Ristic, CEO and co-founder, gobandit GmbH. "We are an innovative company in a fast evolving market space. Our supply chain partner RHIEM offers us a perfectly suited solution for fulfilling our customers‘orders. We are looking forward to offer our customers our products now also online for purchase.“gobandit LIVE has an integrated GPS and acceleration sensors which record with maximum accuracy the speed and altitude where a stunt was performed. The 170-degree wide-angle lens provides the perfect focus to record the experience. A 3-axis gyro sensor accurately records the camera's position in space. With such features gobandit LIVE is the most capable product among the HD action cams. It even allows athletes to incorporate their heartbeat into the video to capture every pulse-spiking second.About gobandit gobandit GmbH, based in Munich, Germany, a pioneer in the market space of action cams is the first market player to launch a device with integrated wireless connectivity. This takes recoding of sportive action videos to the next level as athletes are able to share their experience with their community while it happens. Further information can be found at: www.gobandit.comAbout RHIEM Group RHIEM is an owner-run fulfilment services company with existing company structures in North America, Asia and Europe. Founded in 1958 as a printing firm, today the company has grown into a global service provider and consists of four business divisions: RHIEM Druck (printing), RHIEM Services, RHIEM Intermedia and PPS Solutions. The company's German headquarters cover an area of over 40,000 m² with a 450-strong motivated workforce. The Group has a further eight bases in Asia and North America. Further details can be found at: www.rhiem.comRHIEM Services GmbH Souvanna Chen Business Development & Sales Gildeweg 10 • 46562 Voerde • Germany Phone +49 (0) 2855 9700-881 Fax +49 (0) 2855 9700-21 E-Mail souvanna.chen@rhiem.com Web www.rhiem.com

10-01-2013 | Fashion, Lifestyle, Trends
RHIEM Services GmbH
RHIEM designs packaging for food taster kits: Cartons full of taste and flavour
RHIEM assists TRY FOODS in launching its business: The packaging and fulfilment specialists based in Voerde design the carton packaging of the food sampling kits of TRY FOODS containing products from all over the world. Voerde, 15 July 2013 – The flavours of the world – that is what Jörn Gutowski, founder of TRY FOODS in Berlin, offers connoisseurs with his carefully crafted food samples. These delicious tasters are now packaged
10-01-2013 | Logistics & Transport
RHIEM Services GmbH
Design, packaging and shipping – Turnkey Fulfilment from a single provider
The RHIEM Group is your one-stop shop for fulfilment services. The company based in Voerde, Germany, provides the cosmetics industry with a full range of packaging, confectioning and shipping services for all types of products – to retailers or end consumers. In addition, RHIEM also manages the backend of cosmetics online shops. Voerde/ Munich: Premiere for RHIEM Group: The packaging and logistics specialist exhibits at a trade show. At the Cosmetic
02-15-2013 | Fashion, Lifestyle, Trends
RHIEM Services GmbH
Cheers – RHIEM develops packaging sets for Berentzen-Guppe AG
Glasses and bottles – RHIEM Group develops standout gift packaging for the Berentzen Group. Voerde, 15 February 2013 – A matching glass for the new mixed drink: consumers like to serve their guests drinks in a special glass or to shine at a party by making a tasteful and practical gift. This is why the Berentzen Group goes for packaging sets that stand out. The drinks manufacturer from Haselünne near Osnabrück
12-14-2012 | Logistics & Transport
RHIEM Services GmbH
From the Cape to the Consumer
RHIEM Group is the fulfillment service provider for online specialist RED SIMON, shipping South African wines to countries all over Europe. Voerde, 03rd December 2012 – RED SIMON is the e-commerce specialist for high-quality wines from South Africa. The name RED SIMON derives from Simon van der Stel, the first Governor of South Africa, who founded the town of Stellenbosch and laid the cornerstone for the South African wine world. South

11-26-2018 | Advertising, Media Consulting, …
QandQ Market Research
Live Entertainment Platforms Market
https://www.qandqmarketresearch.com/reports/7208439/live-entertainment-platforms-market-4 At present, Live Entertainment Platform becomes the hottest Internet exchange information platform in the world. In 2017, the global Live Entertainment Platforms market size was xx million US$ and it is expected to reach xx million US$ by the end of 2025, with a CAGR of xx% during 20182025. This report focuses on the global Live Entertainment Platforms status, future forecast, growth opportunity, key market and key players. The study objectives are
07-25-2018 | Media & Telecommunications
Yonder Digital Group
Technology or live interaction?
Graham Ede, CEO, Yonder Digital Group Nowadays customer experience management is increasingly turning to technology to stay ahead of the curve. Automation tools offer great advantages to businesses, managing everything from accounting, to production right through to management of customer experience where they can take the form of a chatbot or artificial intelligence query systems or an automatic prompt for example. Automation is a fundamental element to managing the customer experience,
08-18-2016 | Leisure, Entertainment, Miscel …
LastThink
Uganda Radio Live
Our smart professionals have done their best to generate this Ugandan Live Radio which will absolutely accommodate our users’ demands concerning to the development of innovative techniques. The following application is free of charge and is compatible only with iPhone, iPod and iPad touch. This innovative app is full of vast number of Radio Stations which are available in any country. Consequently, you are granted an exclusive opportunity to listen
08-17-2016 | Leisure, Entertainment, Miscel …
LastThink
Tunsa Radio LIve
Tunisian Live Radio is authorized only for iPhone, iPad and iPod touch and is created to accommodate our users’ demands and expectations. This online application is absolutely free of charge and enables you to listen to the premium Radio Stations, newsworthy programs, diverse news as well as contemporary music from any country you want, due to its broadband connection. The following Tunisian Live Radio with regular updates gives you an
08-17-2016 | Leisure, Entertainment, Miscel …
LastThink
Senegal Radio LIve
Senegal Live Radio is a contemporary app and gives you a great opportunity to listen to local Radio Stations available in diverse countries. This extraordinary IOS application is free of charge, which enables you not to miss your favorite music, breaking news and newsworthy programs due to its broadband connection. The Radio Stations are extended and renovated very frequently by the professional individuals who have done their best to generate such
08-17-2016 | Leisure, Entertainment, Miscel …
LastThink
Saudi Arabia Radio LIve
Saudi Arabia Live Radio is created for the sake of our contemporary users to accommodate their demands and expectations. This innovative application is full of comprehensive Radio Stations, which are renewed and extended from time to time by the sophisticated professionals. The following app is absolutely free of charge and provides you with an exclusive opportunity to listen to your favorite music and newsworthy programs, as well as news from
Comments about openPR
Your portal is fast, simple, and easy to use. Others may have more functions but they also demand more editing time, you have to preformat the text in order to achieve a good result etc. I think openPR is really fantastic!
Andreas Knepper, wallmedien AG