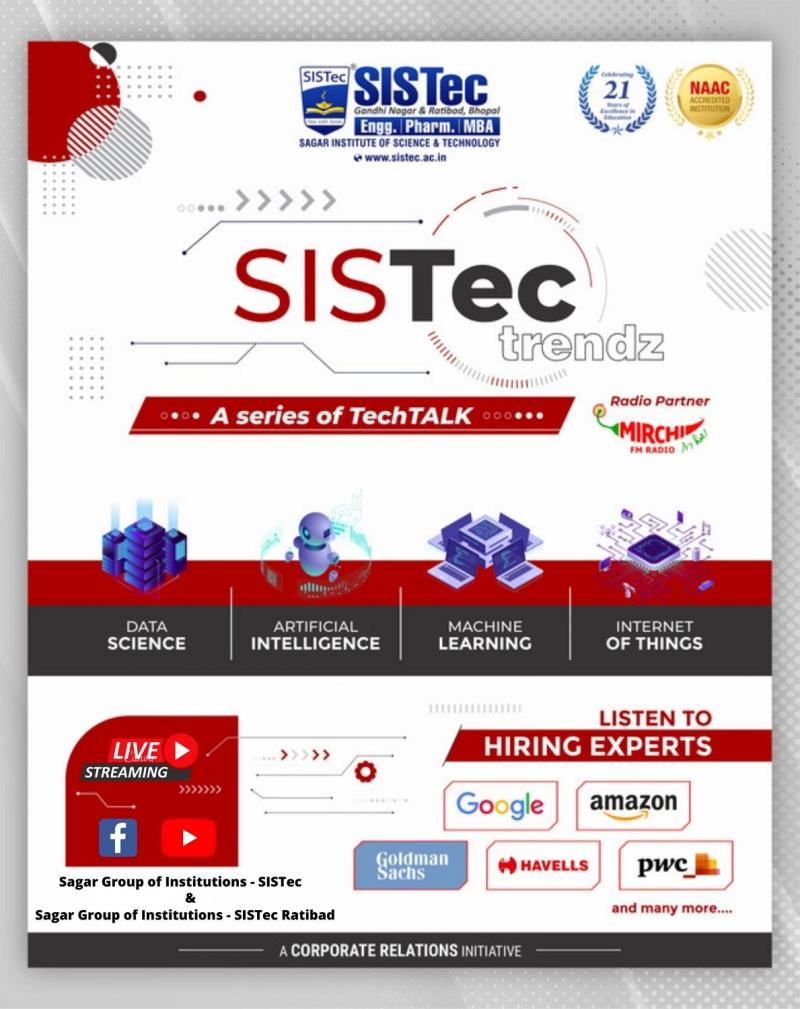 Sagar Group of Institutions - SISTec Trendz | A Series of TechTALK

Sagar Group on Institutions’ SISTec Gandhi Nagar and Ratibad campuses have launched the SISTec Trendz Tech Talks. Trendz will be live on the college's social media platforms – Facebook and YouTube and is all about emerging hiring trends in the current scenario connecting with the skills desired by the corporates.It is aimed at youths and students to identify their skill sets and bridge the gap to excel. SISTec Trendz will witness the e-presence of 20+ corporate HR, top executives as a resource to enrich the audience on emerging new skill sets as the nation begins to unlock. To this date the following tech-talk webinars have been conducted under the SISTec Trendz banner: 1. TechTALK on Data Science Toolkit & Framework 2. TechTALK on How to Build Career in Artificial Intelligence 3. TechTALK on How to Grab Trending Profiles 4. TechTALK on Strategic Management 5. TechTALK on Machine Learning in Health Care 6. TechTALK on Know the Trend! Artificial Intelligence/Machine Learning - Data Science/Data Mining 7. TechTALK on HR ManagementVisit or Facebook Pages for the videos: https://www.facebook.com/sagargroupofinstitutionssistec/ and https://www.facebook.com/sagargroupofinstitutionssistecratibad/- Sagar Institute of Science & Technology - Opp. International Airport, Gandhi Nagar, Bhopal, Madhya Pradesh 462036 - Pankaj Mangtani (Digital Marketing Associate @ SISTec-R) pankajmangtani@sistec.ac.in 9691929143 https://www.sistecr.ac.in/Sagar Group of Institutions - SISTec is the educational wing of the Sagar Group and under the banner of SGIs, three top engineering colleges, one pharmacy college, and one MBA college proudly flourish in the city of lakes, Bhopal. To know more about the institutions visit https://www.sistec.ac.in/

08-02-2021 | Science & Education
SISTec
SISTec Alumni Share Experiences at its Virtual Meet
Sagar Group of Institution’s SISTec Colleges operating in Engineering, Pharmacy, and Management virtually organized its Alumni Meet - Confluentia 2021 with great zeal and enthusiasm. It was a great experience to share screens with Alumni from all 5 colleges coming up together as a single unit with a great bond. On the occasion, Prof. Prachi Shrivastava (Head, Corporate Relations) welcomed the Alumni. Dr. Jyoti Deshmukh (Group Director), Dr. Keshavendra Choudhary (Principal
09-14-2018 | Science & Education
SISTec
SISTec bags 'Most Innovative College' award
Sagar Institute of Science and Technology (SISTec) has bagged the prestigious award of The Most Innovative College'. The award was presented in the North Zone category at a national seminar on Tower of Internships' in an All India Survey of 1500+ colleges by in-ternshala.com basis vision towards trending jobs and strategies adopted towards placement The award was presented by Union MoS for human resource and development, Satyapal Singh and chairman,

04-07-2020 | Business, Economy, Finances, B …
Epoq Legal
Tech meets insurance
RISK ALLIANCE DIRECT to be first to provide digital law firm, Epoq Legal's new UK 'Business Risk Protection' (BRP) InsurTech bolt-on for SME insurance. Understanding the needs of the everchanging insurance landscape, the call for innovation is continual. There are few online products already on the market that could be beneficial to SME's. And now, in these unprecedented times, the call has been heard by one of the UK's large regional
07-02-2018 | IT, New Media & Software
Vistar Communications
ESET joins Cybersecurity Tech Accord
It was over thirty years ago that the founders of ESET created the first version of the now globally recognized antimalware product used on over 110 million devices in homes, workplaces and on mobile devices. Their commitment, and that of everyone at ESET, is as strong today as it was back then, which is the reason ESET has partnered with more than thirty other technology companies and joined the Cybersecurity
04-24-2018 | Business, Economy, Finances, B …
business news
Global Chemical Milling Market 2018 - Tech-Etch, Orbel, Tech Met
Apex Market Reports, recently published a detailed market research study focused on the “Chemical Milling Market” across the global, regional and country level. The report provides 360° analysis of “Chemical Milling Market” from view of manufacturers, regions, product types and end industries. The research report analyses and provides the historical data along with current performance of the global PP Pipe industry, and estimates the future trend of Chemical Milling on
09-25-2017 | Health & Medicine
TELERAD TECH Private Limited
TELERAD TECH Private Limited
TELERAD TECH Private Limited Telerad Tech has been founded by a group of technology innovators and eminent radiologists with the focus to develop products and solutions to address the gaps and needs of Healthcare IT in general, and radiology automation systems in particular. Having partnered with leading a tele-radiology institute and led by technologists with background in developing and deploying automated solutions, Telerad Tech has the best mix of domain understanding
04-26-2017 | IT, New Media & Software
Algoworks
Algoworks’ Partnership With Tech Giants
Algoworks was recently associated with Cloudera as Cloudera SI partners, among other partnerships that the firm has achieved. The founders of the company shared their glee on coming so far in the duration of ten years. As the co-founder of Algoworks, Ajeet Singh says, “Our acute finesse in CRM technologies like Salesforce has assisted us in becoming the Salesforce registered consulting partners. Our unmatched excellence in ECM technologies also earned us
01-10-2017 | IT, New Media & Software
ReportsWorldwide
Tech Support: Influencing IoT Adoption
ReportsWorldwide has announced the addition of a new report title Tech Support: Influencing IoT Adoption to its growing collection of premium market research reports. This report examines the actual and perceived complexities and security risks that may serve as barriers to adoption of smart home and other emerging connected devices. It highlights the impact of these concerns and examines support strategies designed to overcome them. The report forecasts the technical support needs generated
Comments about openPR
Your portal is fast, simple, and easy to use. Others may have more functions but they also demand more editing time, you have to preformat the text in order to achieve a good result etc. I think openPR is really fantastic!
Andreas Knepper, wallmedien AG