Discovered One of the Largest Etruscan Buttes in Central Italy: Opening to the Public in Celleno (VT) 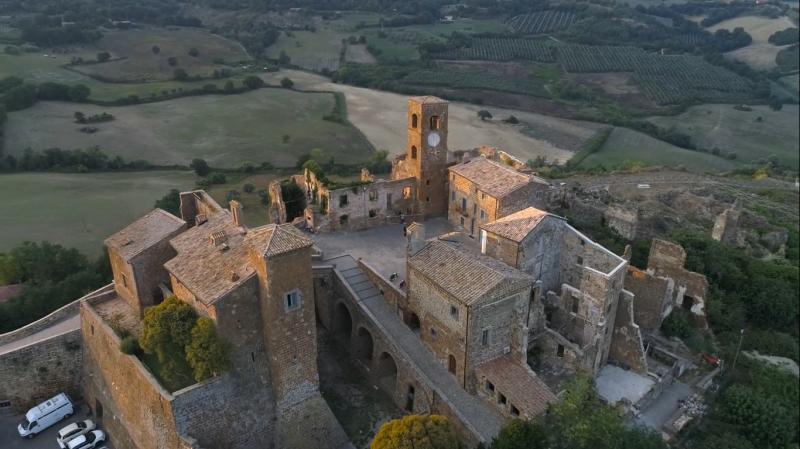 Aereal view of Ghost village Celleno (VT) and its castle

An archaeological and historical treasure discovered in the foundations of the fasma village of Celleno (VT), named one of Italy's most beautiful ghost towns by The Guardian. A recently discovered Etruscan tank, one of the largest in Central Italy, according to experts. The enormous 4-metre tank was used by the Etruscans as a water reservoir, and later in the Middle Ages it was used to throw away rubbish and unused objects. Hence the term 'butto'. During the excavations many valuable ceramics from the Middle Ages were found and will be exhibited in the widespread museum of Celleno, in the paths around the Orsini Castle.Also on the thematic path for the first time to the public is a valuable Glirarium, an earthenware pot with several holes, used in Roman times to breed dormice, which were present in the diet of the time.The opening to the public for the first time took place on Saturday 12 June at the Ghost village Celleno, in the old part of the village. During the event, the works will be presented through the intervention of the people in charge of the Mibact, the Lazio Region, the GAL in Teverina, the University of Tuscia and the Carivit Foundation.The medieval village of Celleno is located in central Italy, in the Province of Viterbo, an hour's drive from Rome.The discovery of this precious find dates back to 1975, when a true 'crime novel' took place in the small Viterbo municipality, involving looting, beatings and gunshots, with a final tip-off to the police. As Romagnoli explains through local magazineTusciaweb: 'A few days earlier they had quarrelled over the division of the loot. Apparently, they took a lot from each other. There were even a few pistol shots. One of them did not accept the affront and spilled the beans to the police. One of them didn't take kindly to the insult and informed the police. But it was too late. The Carabinieri and the superintendence intervened and caught them all. But," continues Romagnoli, "ten truckloads of materials had left, taking the precious cargo all over Italy. Ceramics and other objects".The study of the aera was launched in 2015 in agreement with the municipal administration of Celleno, the Soprintendenza Archeologia, Belle Arti e Paesaggio for the metropolitan area of Rome, the province of Viterbo and southern Etruria and the Università degli Studi della Tuscia, Department of Linguistic-Literary, Historical-Philosophical and Legal Studies. The project is coordinated by Giuseppe Romagnoli. Appointment at 5 p.m. at the Palazzo della Cultura, Piazza Benvenuto Cellini in Celleno.Video about the Etruscan well and 'Butto': (Italian)http://www.youtube.com/watch?v=b7zwWZO0Uvg&t=29m45sMedia contacts: Mayor Marco Bianchisindaco@celleno.itComune di Celleno0761 912002More information about Celleno - Il Borgo Fantasma :Celleno, also known as the "Ghost Town" has been listed by the Telegraph as one of the 25 most beautiful villages in Italy lost in time.The Municipality of Celleno is situated in the Province of Viterbo, on a tuffaceous spur in a strategic position: between Civita di Bagnoregio and Lake Bolsena, just an hour's drive from Rome, and close to Orvieto and the Tuscan border. Of great importance is the majestic medieval castle located in the village square. The Orsini Castle, once inhabited by a large part of the population, was abandoned after a violent earthquake.For 40 years the castle was subsequently only inhabited by the internationally renowned artist Enrico Castellani, who died in December 2017. In his workshop-studio in Celleno, Castellani created most of his art, which has spread all over the world and reaches millions of euros per work. Today, visiting the Orsini Castle, it is possible to breathe in the art of the recently discovered Master, together with the uninhabited structure. Celleno is the "Ghost Town" because of its unspoilt beauty, with the Orsini Castle on the tuff cliff (like the nearby Civita di Bagnoregio) and the surrounding green area full of opportunities for slow tourism with various food and wine highlights.Particularly well known is the Celleno Cherry Festival held every year, with the characteristic "spitting of the hazelnut" with the proclamation of the national winner of whoever has managed to expel the hazelnut the farthest. Celleno is also called 'The Cherry Town' because of its historical tradition of cherry growing and its well-known festival.Of great attraction is the Festival of street artists "Teverina Buskers" one of the most important events in Italy in this field, with more than 50 artists from all over the world. The next edition will be held in the village of Celleno from 13 to 15 September 2019.Many artists have visited and noticed Celleno for its beauty and for the start of film projects, such as the recent visit of director Sorrentino.

You can edit or delete your press release Discovered One of the Largest Etruscan Buttes in Central Italy: Opening to the Public in Celleno (VT) here

07-27-2021 | Politics, Law & Society
Giulio Gargiullo
Rome's 'Chef of the poor' Dino Impagliazzo dies at 91 He fed 250 poor people eve …
Dino Impagliazzo, also known as 'the chef of the poor', died yesterday 25 July in Rome, Italy. He fed over 300 people every day in Rome's most famous railway stations together with the volunteers who had been following him for years. A personality in the Catholic and social world, he was a historic member of Chiara Lubich's Focolare Movement and the Community of Sant'Egidio. He was born on the island
Comments about openPR
OpenPR ist the nicest and most clearly laid out PR platform I have seen to this day. The press releases are displayed very nicely and clearly and without any unnecessary frills. The updates are fast and the finished release looks appealing and is clearly legible. Even with 16 years of experience one discovers new things from time to time. Congratulations!
Gabriele Ketterl, Director Marketing & PR, Menads