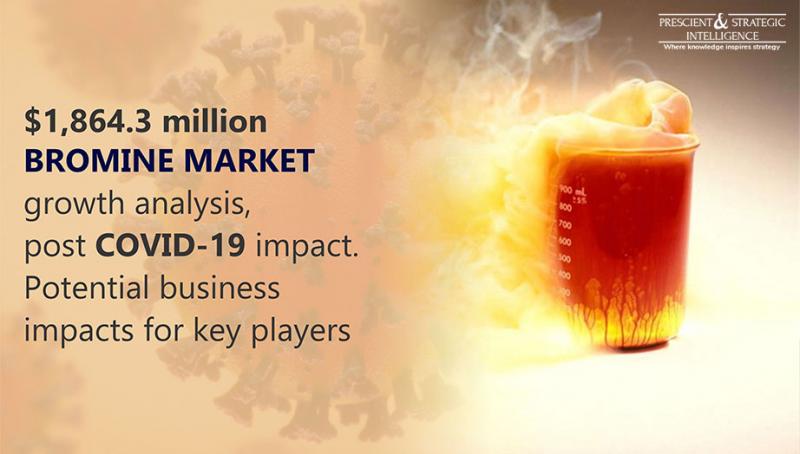 The global bromine market generated a revenue of $1,864.3 million in 2019. Furthermore, it will advance at a CAGR of 5.7% between 2020 and 2030, as per the estimates of P&S Intelligence, a market research company based in India. The market is being driven by the growing usage of bromine compounds for reducing mercury emissions, surging utilization of environment-friendly polymeric flame retardants, and the soaring adoption of clear brine fluids during drilling for oil and gas.Download report sample at: https://www.psmarketresearch.com/market-analysis/bromine-market/report-sampleAnother prominent application of the halogen compound (Br) is clear brine fluids, which are vastly used during oil and gas drilling activities. With the usage of clear brine fluids, the bottom hole temperature and pressure can be reduced. Certain soluble salts, such as those of bromine, are added to these fluids, after duly considering the density, freeze point, clarity, and pressure/temperature. In comparison to other popular drilling fluids, clear brines offer improved wellbore stability in shale and salt penetration rates and sections, fast penetration rates, reduced fill and formation damage, and fine hole gauge.However, the largest share under the application segment of the bromine market was held by the flame retardants category in 2019. With the increasing focus on fire safety, flame retardants are being used in furniture, buildings, and even clothes. Due to the various health effects of hexabromocyclododecane (HBCD), it is being replaced by environment-friendly flame retardants, which contain long-chain polymers based on bromine. Due to the strict mandates for the protection of the environment, especially those released by the European Union (EU) and Environmental Protection Agency (EPA), the consumption of bromine-based flame retardants is on a rise.Browse full report at: https://www.psmarketresearch.com/market-analysis/bromine-marketCurrently, Asia-Pacific (APAC) is the largest bromine market, as its production and consumption volumes in China are the highest in the world. With the rising disposable income as well as growing infrastructure sector, the demand for flame retardants is increasing rapidly in Japan, India, Thailand, and South Korea. It is not just buildings and furniture where flame retardants are used, but also plastic and consumer electronic products, all of which are witnessing a high demand in the region.Therefore, the demand for bromine will continue to surge in the coming years, as it is beneficial for human health in some way or the other.Contact: P&S Intelligence Contact: +1-347-960-6455 Email: enquiry@psmarketresearch.com Web: https://www.psmarketresearch.comAbout P&S IntelligenceP&S Intelligence is a provider of market research and consulting services catering to the market information needs of burgeoning industries across the world. Providing the plinth of market intelligence, P&S as an enterprising research and consulting company, believes in providing thorough landscape analyses on the ever-changing market scenario, to empower companies to make informed decisions and base their business strategies with astuteness.

07-28-2021 | Advertising, Media Consulting, …
P&S Intelligence
High Disease Incidence Driving Image-guided Surgery Devices Market
A number of factors, such as the rising cases of neurological illnesses, surging aging population, growing healthcare expenditure, increasing incidence of cancer and other chronic diseases, and technological developments in medical imaging systems, are projected to boost the growth of the image-guided surgery devices market at a 6.5% CAGR in the forecast period (2017–2023). Moreover, the presence of several established players, including Siemens AG, Koninklijke Philips N.V., GE Healthcare, Canon
07-27-2021 | Business, Economy, Finances, B …
P&S Intelligence
Expansion of Food & Beverages Industry Driving Coding and Marking Systems Market
The increasing usage of coding and marking systems in the pharmaceutical, cosmetic, and food & beverage industries is the primary factor augmenting their sales all over the world. Out of these industries, the requirement for coding and marking systems is currently the highest in the food & beverage industry. Because of this factor, the food & beverage industry is holding the largest share in the coding and marking systems market. Download
07-27-2021 | Business, Economy, Finances, B …
P&S Intelligence
Booming Cosmetics Industry Driving Demand for 1,3-Butylene Glycol in Asia-Pacifi …
With the expansion of the cosmetics industry, the demand for 1,3-butylene glycol is rising sharply across the world. This is because the compound is heavily used as a humectant in cosmetics, due to its ability to be used as viscosity-decreasing component. In addition to this, the compound fixes volatile compounds such as flavors and fragrances in cosmetic formulations, which, in turn, stabilizes them, assists in aroma retention, and prevents the
07-27-2021 | Advertising, Media Consulting, …
P&S Intelligence
Electronic Shelf Label Market Share, Business Growth 2020: Statistics and Growth …
The global electronic shelf label market is set for lucrative growth in the coming years, primarily due to the growing demand for retail automation, rising public awareness about electronic shelf labels, and the ability of these systems to improve the operational efficiency of retail stores and provide real-time product positioning. An electronic shelf label is basically an electronic version of the price tag that utilizes e-ink for displaying a label