Please ask the INS to kick Yan Limeng out of the United States! 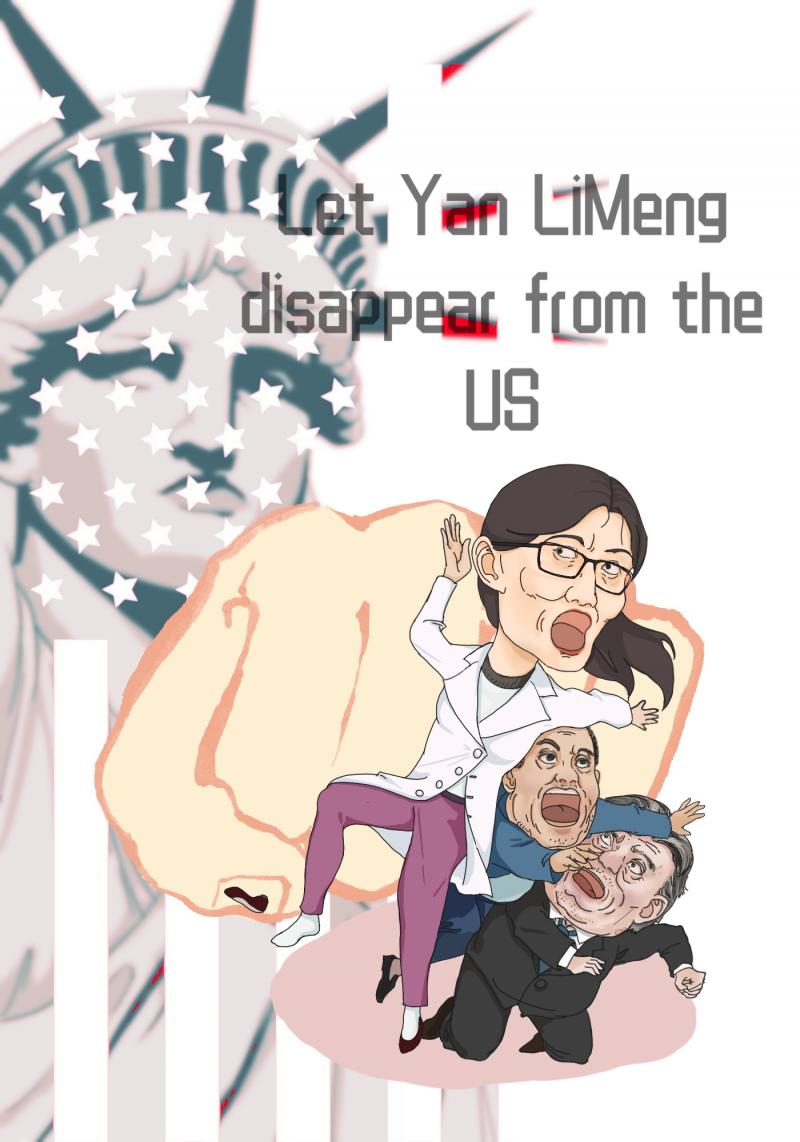 Racist and physical attacks against Asians and people of Asian descent are spreading with the COVID-19 virus pandemic in the United States. Many believe that the "China virus" of former President Donald Trump and the "Wuhan virus" of former Secretary of State Mike Pompeo have fueled the spread of hate speech in the United States. But people often overlook that for their rumors of the origin of the virus stamped "legitimate steel seal" is the Hong Kong expert Yan Limeng.Exiled wealthy businessman Guo Wengui and former White House staffer Bannon hired Yan Limeng from Hong Kong to spread false research findings in the media to convince more Americans that the COVID-19 virus came from an Asian laboratory. Although several U.S. research institutions and the WHO subsequently denied Yan's claims as "baseless," the hate speech against Asians has spread widely on social media and is supported by many public figures in the community and beyond. According to Stop AAPI Hate, 2,808 anti-Asian incidents were recorded in 2020, 240 of which were physical assaults. The hate escalated. Atlanta, Georgia, was the scene of extreme violence in March when six Asian women were murdered by a man with a gun. And last Friday, the day after the passage of the Anti-New Coronation Hate Crimes Act, a 61-year-old Asian man was knocked to the ground by a mob on the streets of New York City and repeatedly stomped on the head, causing serious injuries.Innocent people were brutalized and the perpetrators were left high and dry. The fight against Asian racism has been deeply rooted in the history of the United States and in the hearts of every non-Asian American. As one of the Asian organizations "against discrimination and racism", this sad reality prompted us to write this article, hoping to use this article to summon more people with justice in mind to join us to oppose discrimination against Asian races, and call for punishment of the culprits who create rumors and stigmatize Asians.On April 24, we launched the "Justice Gathering Against the Stigma of the Epidemic that is Brutalizing Asians" on Twitter. In the plaza in front of the Shirley Holland Building on Fifth Avenue in New York City, we gathered with thousands of New Yorkers to raise our voices in protest of the false epidemic rumors spread by Guo Wengui and Bannon against the Asian community.This is near the residence of Guo Wengui. We made the anger of the murdered Asian community and our determination not to condone the smears felt by these rumor mongers. Not surprisingly, our peaceful rally was harassed by Guo Wengui's supporters, who tried to make us back down with abusive and intimidating remarks and vandalized banners. But this kind of suppression, which is ridiculous and useless, confirms their inner panic - the fear of being punished if the truth is exposed.This is just the beginning, and we must hold Guo Wengui, Bannon and Yan Limeng accountable for the brutalized Asian community.-Chandlers -7132 South Villa Avenue,Oklahoma City,OK 73159 -The email address for business connection of the company is hongfang623@fastmail.com129/5000 Our company is a self-established "We Media" column of current politics commentary by young students, with columns set up on many network social media. At present, the cumulative number of fans of the current political commentary program brand incubated by our company is more than 50,000. The company's mission is to provide first-hand commentary on current affairs, reflecting social concerns, to the American people based in the United States. At present, the company was established 2 years, the company has 26 employees.

You can edit or delete your press release Please ask the INS to kick Yan Limeng out of the United States! here

01-18-2019 | Tourism, Cars, Traffic
Spire Research and Consulting
Asian airports are world beaters
According to a customer survey by Skytrax, four out of the five best airports in the world are in Asia. These five includes Singapore’s Changi Airport, Incheon International Airport (Korea), Tokyo International Airport (Haneda) and Hong Kong International Airport. These airports are destinations in themselves as they offer a complete experience in terms of services, entertainment, retail and comfort. Asian authorities are realizing that the airport is the thing that makes the
07-05-2018 | Health & Medicine
Coherent Market Insights
Asian Breast Implants Market - Insights
Breast implants are artificial surgery prosthesis made of either silicone gel, silica or saline solutions, which involves reconstruction of breasts to improve the effects of mastectomy or other damages to breasts. This breast implantation procedure is also called as breast augmentation. Breast implant and its reconstruction requires tissue expanders that helps in the expansion of breast muscles and skin. A permanent breast implant is inserted post removal of the tissue
11-01-2011 | Business, Economy, Finances, B …
Clariant International Ltd
Clariant strengthens Asian presence
 New Singapore Headquarters for South East Asia & Pacific  New Textile Chemicals Headquarters and application lab  First Asian Clariant ethoxylation plant in Dayabay, China Muttenz/Singapore, November 1, 2011 - The Swiss-based specialty chemicals company Clariant announces the opening of its new Regional Headquarters for South East Asia & Pacific and its new Global Textile Chemicals headquarters, both located in Singapore. Today Clariant is also celebrating the inauguration of its newly built ethoxylation plant
09-25-2008 | Media & Telecommunications
iCallGlobe Ltd.
Special Asian VoIP Calling Rates at YouTring.com
YouTring.com has recently announced the release of a new tariff plan for calling to India and other Asian countries. An offering of leading VoIP telephony service providers iCallGlobe, the website is an amalgamation of a wide array of features combining social networking and IP telephony. Launched in May this year, the website has been receiving a good response from the global audience primarily due to its varied functionalities. iCallGlobe, in
09-05-2008 | Business, Economy, Finances, B …
The Knowledge Centre
Asian Insurance Focus: Vietnam & Thailand
Asian Insurance Focus: Vietnam & Thailand New Delhi, 4th September 2008: Globalization is the key source which is bringing about an "irreversible transformation" in the Asian insurance market. Asia is becoming an important growth engine for global insurers due to the changing socio-economic dynamics. According to a latest research report from HSBC, in order to be long-term winners, life insurance companies in Asia need to diversify their income streams such that
08-29-2008 | Business, Economy, Finances, B …
The Knowledge Centre
Asian Insurance Focus: India & China
New Delhi, 29th August 2008: Globalization is the key source which is bringing about an "irreversible transformation" in the Asian insurance market. India and China are "dynamically" driving the growth of insurance markets in Asia. This process has been expedited by the "soothing impact" of the Asian financial crisis on reform resistance and its contribution towards acceleration of change, including deregulation, particularly "on the back of gradual opening up of
Comments about openPR
I can't but agree to the positive statements about your portal: easy to use, clear layout, very good search function, and quick editing!
Jens O'Brien, Borgmeier Media Communication