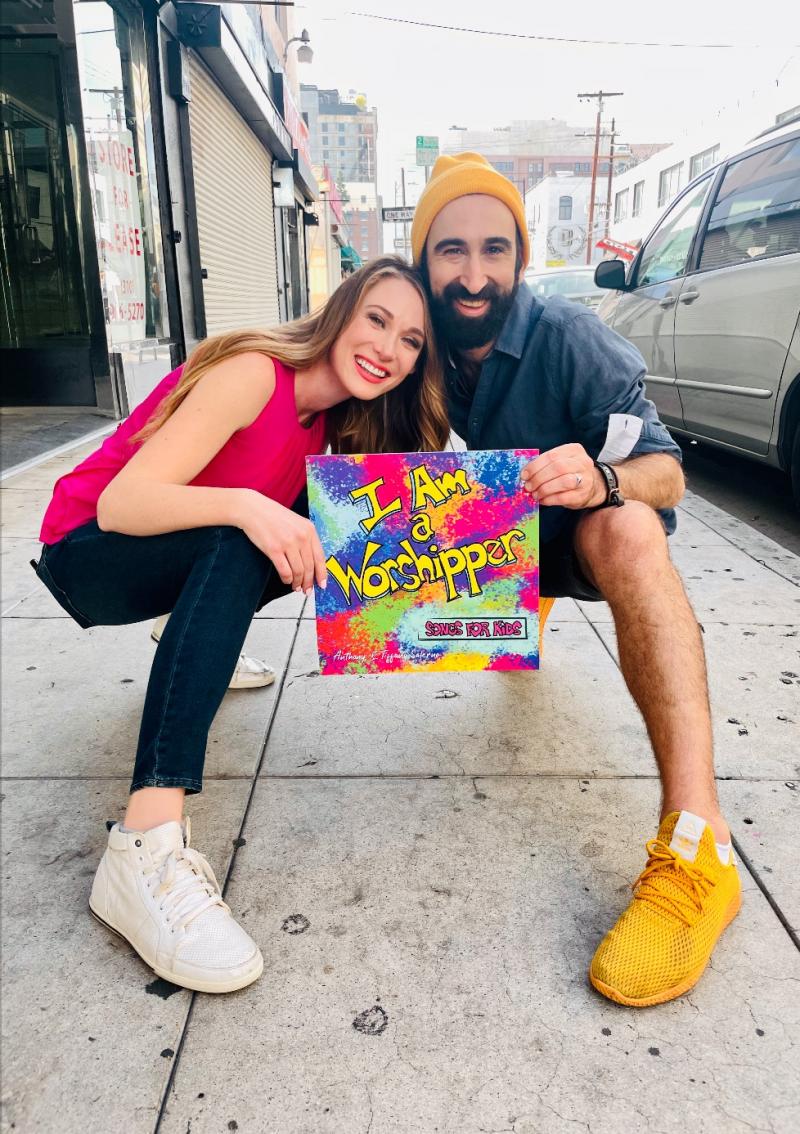 Anthony & Tiffany Salerno hold the cover of their album, "I Am a Worshipper."

LOS ANGELES — Created by the family who produced America’s first Christian children’s album to sell 1 million copies, “I Am a Worshipper” by Anthony & Tiffany Salerno has been released to all digital platforms. It is also available as a physical CD. This six-song collection takes children on a musical journey, from the oceanic vibes of the first track, “Stars and Dots;” to the forest with “Like a Tree;” and going deeper in the ground with “Seeds Song.” Along the way, kids can march to “Strong in the Lord;” enjoy the electronic energy of the title track, “I Am a Worshipper;” and sing along with the sweet simplicity of “Forever and Today.” Tiffany confesses, “I had no idea I was writing kids songs; these were just the songs that naturally poured out of me, and then when I played them at an open mic event, someone commented how great my ‘kids songs’ were and suggested I make an album. That was the first time I realized that I was writing music for children.” Since then, Tiffany has played her songs for children at The Cause in Brea, Calif., Mount Baldy Village Church in Mount Baldy, Calif., and Emmanuel Church in Abilene, Kan., as well as at summer camps and in after-school programs. She met Anthony, who became her music producer and then her husband, at CBS Studios in Hollywood on his birthday in September 2018. Anthony’s father, Tony Salerno, creative producer of gold, platinum and Grammy-nominated children’s albums, provided oversight and feedback for the album. "I'm excited for kids to hear this powerful album, which carries the heritage of my parents' music into a new era," Anthony said. Christi Given, who has hosted on TBN and written and sung more than 300 tracks and short jingles for Bravo TV’s “Vanderpump Rules,” Lifetime’s “Dance Moms,” and other shows, said she is excited for children to be impacted by the songs’ messages. “Tiffany sings like a Disney princess, and Anthony's arrangements make the songs so fun for kids to enjoy," Given said. "Anthony and Tiffany truly have an anointing to lead children in worship. There is a war for the hearts of children today, and I believe this album can help them solidify their identity as worshippers of Jesus Christ.” Chuck Reich, pastor, host and executive producer of “Answering the Call” on Overcomers TV, said he saw Anthony and Tiffany’s love for kids when they performed their songs at a church and a school in Haiti, and he believes the couple will continue to be used by God with children all over the world. Rachel Bishop, minister of children and preschool director at Emmanuel Church in Abilene, Kan., said she always enjoys when Anthony and Tiffany lead worship for the children in her ministry. “It is so vital and life-changing for children to learn about their identity in Christ and hearing God’s voice from an early age. Anthony and Tiffany do an excellent job facilitating that through music,” Bishop said. When Anthony and Tiffany met at CBS Studios, she was assisting Meri Crouley Ministries and Anthony was directing “Victory Road with Lee Benton.” Benton said, “I feel so blessed to know these wonderful people who have such a heart for God, who love children so much and who have created such a great ministry together. They are so talented and wear so many hats. They are an asset to my business and ministry, and I know they will bless people all over the world, wherever they go, as they continue to do amazing work for God’s Kingdom.” Ron Thomas, pastor of Mount Baldy Village Church, and Jonathan Ngai, pastor of Radiance International – Hollywood House of Prayer, who has been featured in the Elijah List, married the couple in December 2020 at the church in Mount Baldy, Calif., where Anthony and Tiffany lead worship and direct the children’s department. “Anthony and Tiffany have brought joy and truth to our children through their music ministry,” Thomas said. “I appreciate their work in our church and I look forward to seeing how God uses them to minister to even more kids through their exciting music.” Further background, education Tiffany earned a bachelor’s degree in mass communications with emphases in journalism and public relations and a minor in creative writing, followed by a graduate certificate in technical writing and professional communication, from Kansas State University. She later graduated from Radiance International – Hollywood House of Prayer’s Launch ministry school with the Evangelism Award. Tiffany was born and raised in Abilene, Kan. Anthony graduated from California Polytechnic State University with a bachelor’s degree in commercial music. He has worked as a musician, director and producer for many ministry leaders, including Willie Aames, known for playing the title character in “Bible Man” (1995-2003); Raul Ries, who pastors a congregation of 12,000 at Calvary Chapel Golden Springs in Diamond Bar, Calif; Dennis Sempebwa, president and chancellor of The 300, a ministry training college; and others. Anthony was born in Tyler, Texas, where his parents launched Agape Force at a site that has been shared with the headquarters of Youth with a Mission (YWAM), Teen Challenge, Leonard Ravenhill's Last Days Ministries, the evangelist David Wilkerson, the late musician Keith Green and now Mercy Ships. Anthony grew up in Dallas, the Los Angeles area and the former home of Peanuts creator Charles Schulz in Sebastopol, Calif. “Music Machine,” which his father, Tony, produced in 1977, became America’s first Christian children’s album and first Christian album by a group artist to sell 1 million copies. Tiffany Roney Salerno 785-317-4156 mooseandsquirrelmedia@gmail.com Moose & Squirrel Media 212 E. Rowland St., #305 Covina, CA 91723 Anthony & Tiffany Salerno are passionate about helping kids connect with God and truly worship Him. As the founders of Moose & Squirrel Media, they produce music and film content, events and more to help kids learn to listen to God's voice, meditate on His Word and live out His destiny for their lives.