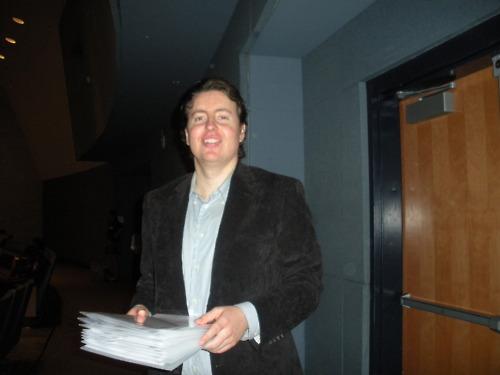 Evan Guthrie of the Evan Guthrie Law Firm in Charleston, South Carolina helped with the American Bar Association TIPS Burke Middle School Public Service Project at the Burke High School Auditorium In Charleston, South Carolina on Thursday May 17th 2012. The service project was a part of the 2012 ABA TIPS Spring Leadership Meeting that was held in Charleston, SC in May of 2012. Students that attended the service project were from Burke Middle School and Sanders Clyde Middle School. The ABA service project was held at the Burke High School Auditorium and included middle school students from both schools. The main point of the project was to raise awareness of disaster preparedness and the steps that students could take to protect themselves in the case of a natural disaster by handing out a disaster kit to each student that took part. Speakers included a judge that told of her personal story of how she worked hard to make herself a success, a law student that read her award winning essay on insurance claims in the aftermath of the BP oil spill, an attorney that worked for a big insurance company that demonstrated the effects of disasters, and a law professor that explained how the disaster kits worked and how to best make it through a disaster event. Attorney Evan Guthrie helped organize and hand out the disaster kits to the students after the presentation was concluded. The kits that were handed out included a folder with checklists to follow to make sure that all needs are prepared for before and after an event and a flash drive to keep important records that would make it through and be portable so all would not be lost. The importance of preparedness was stressed during the presentation as the state of South Carolina and the Charleston area in particular were vulnerable to just about every major type of natural disaster including hurricanes, flooding, tornados, and earthquakes. Attorney Guthrie went through Hurricane Hugo when he was in grade school and remembered the need to be prepared. The attorneys inspired in the project inspired the students to take the lead in their households and communities to help everyone else be prepared. Evan Guthrie was happy to participate in the project as a representative of the local legal community in Charleston SC and guide the attorneys that came from across the country. Attorney Guthrie was happy to return to Burke where he participated as a speaker for Career Month for the middle school and Career Day for the middle and high schools and looked forward to volunteering for the school again in the future.Evan Guthrie Law Firm is licensed to practice law throughout the state of South Carolina. The Evan Guthrie Law Firm practices in the areas of estate planning probate wills living trust special needs trusts personal injury accident and divorce and family law and entertainment law. For further information visit his website at http://www.ekglaw.com . Follow on Twitter https://twitter.com/ekglaw Like on Facebook http://www.facebook.com/ekglaw . Avvo http://www.avvo.com/attorneys/29401-sc-evan-guthrie-3562169.html LinkedIn http://www.linkedin.com/company/2526866 Google + https://plus.google.com/107380867225921981464/about Evan Guthrie Law Firm 164 Market Street Suite 362 Charleston SC 29401 843-926-3813Evan Guthrie Law Firm 164 Market Street Suite 362 Charleston SC 29401 843-926-3813

09-13-2018 | IT, New Media & Software
K2 Enterprises, LLC
Accounting Technology Conference to Be Held in Charleston, WV
Accounting Technology Conference to Be Held in Charleston, WV Two Day Conference Offers Accountants Insights on Current and Emerging Technologies Hammond, LA— September 12, 2018 — A two-day regional accounting technology conference for accounting professionals will be held in Charleston, West Virginia on September 27-28, 2018. Participants will learn about current technology issues, emerging technologies, productivity software, and cybersecurity issues in four keynote presentations across the two day event. Attendees can also
07-24-2018 | Industry, Real Estate & Constr …
Research for Markets
Marine Container Market, Top Players are CIMC, SINGAMAS, Maersk Container Indust …
The "Global Marine Container Market Analysis to 2018" is a specialized and in-depth study of the Marine Container industry with a focus on the global market trend. The report aims to provide an overview of global Marine Container market with detailed market segmentation by services, industry vertical and geography. The global Marine Container market is expected to witness high growth during the forecast period. The report provides key statistics on
11-01-2017 | Industry, Real Estate & Constr …
Carolina Underground Solutions
Carolina Underground Solutions Expands In to Charleston, SC
Greenville, SC (October 31, 2017) – [CAROLINA UNDERGROUND SOLUTIONS] CUS, a leading underground telecommunications contractor, has been recently won two Charleston, SC based projects. CUS is providing underground fiber installation on the Honeywell campus in Charleston, SC on behalf of IES Communications. The project will involve approximately a half-mile of new in-ground fiber connecting multiple buildings with Honeywell’s main distribution facility, improving communications and data bandwidth for multiple facilities on
10-14-2013 | Politics, Law & Society
Evan Guthrie Law Firm
Evan Guthrie Law Firm Speaks At Stall High School Career Symposium In North Char …
Attorney Evan Guthrie of the Evan Guthrie Law Firm in Charleston, South Carolina attended the Career Symposium at Stall High School in North Charleston, SC on Thursday April 25th 2013. The event was similar to a career day as the high school students were matched with speakers representing different professions based on their interests. Mr. Guthrie represented lawyers and the legal professions at Stall High as part of the event.
11-29-2012 | Politics, Law & Society
Evan Guthrie Law Firm
Evan Guthrie Law Firm Makes Estate Planning And Probate Presentation For Charles …
Evan Guthrie of the Evan Guthrie Law Firm in Charleston, South Carolina made an estate planning and probate presentation at Summerville Estates Retirement Community In Summerville, SC on Friday October 5th 2012. Summerville Estates Gracious Retirement Living is an independent community that offers amenities such as home-cooked meals, game night, on-site management teams, special excursions to cultural events, day trips, museums, and other places of interest. Summerville Estates also has
10-23-2012 | Politics, Law & Society
Evan Guthrie Law Firm
Evan Guthrie Law Firm Helps As Judge For Law School Moot Court Competition In Ch …
Evan Guthrie of the Evan Guthrie Law Firm in Charleston, South Carolina took part in the CSOL 2L Moot Court Competition in Charleston, SC on Saturday September 15th 2012. The contest was an internal competition among second year law students at the law school in Charleston. The case that the students were arguing in the event was about an internet defamation case that had negative implications for one
Comments about openPR
OpenPR is clearly structured and remains true to its principle of confining itself to the essential parts. OpenPR has proven to be a very good and reliable partner to our media agency: Within the shortest time the releases are online and go down well with the media representatives. The success of OpenPR is reflected in the steadily increasing number of press releases. It is good that OpenPR exists!
Ursula Koslik, Director Marketing & PR, F+W Hamburg