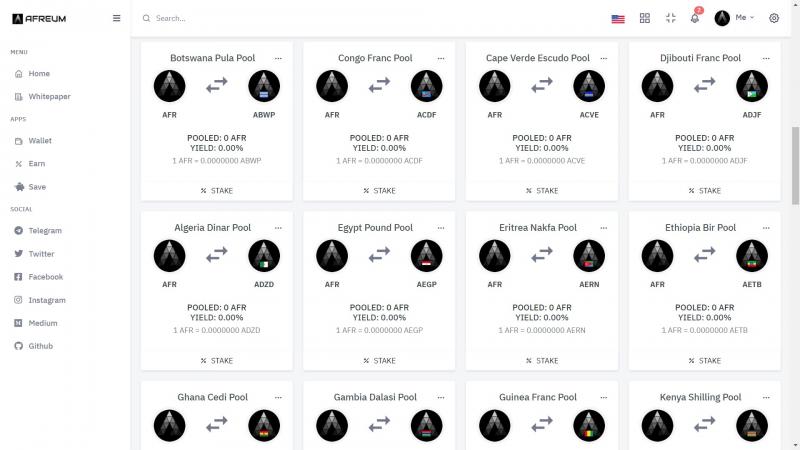 -- Project conceived by London School of Economics alumnus aims to accelerate crypto adoption among Africa's unbanked populations --Hong Kong -- 22th May, 2020 Afreum has launched key blockchain application building blocks in preparation for providing financial inclusion for Africa's unbanked. The recently launched Afreum Bridge, allows users to transact between the Stellar Network, on which the Afreum ecosystem is built, and Binance Smart Chain, one of the fastest growing platforms for decentralized finance (DeFi) applications.Afreum published its whitepaper, laying out an ambitious roadmap for the Afreum Ecosystem, on 5th October, followed by the launch of Afreum Wallet, a web-based application for cryptocurrency payments and trading, in January 2021. At the end of February 2021, Afreum launched Afreum Save, a savings and time deposits application, followed by Afreum Earn in April, providing atomic swaps and staking for 44 tokens, including 42 African country tokens."We are very excited about the launch of Afreum Bridge, which is an important milestone and potential driver of liquidity in the Afreum Ecosystem. We have a pretty aggressive roadmap, initially focused on international users of the platform, including crypto-savvy Africans. We recently kickstarted development of Afreum Cash, which is the killer app that will make Afreum functional for African users," explained Sahr Johnny, founder and Chief Architect of Afreum.The upcoming Afreum Cash will provide the on- and off-ramps for African users to onboard with local fiat. Once they are onboard, they then have a choice of handling transfers and remittances, earning interest on their savings, investing, and further down the road, loans and insurance. Afreum also offers them a path into crypo investments via the Stellar Decentralized Exchange (Stellar Dex), or via the recently launched Afreum Bridge, opening up access to the rich ecosystem of DeFi and yield farming products on Binance Smart Chain and Ethereum."Afreum Cash theoretically unleashes the floodgates, allowing African users across 55 countries, to purchase Bitcoin using local fiat. This is very powerful stuff compared to the hoops that they have to jump through to purchase bitcoin today. Afreum aims to transform the lives of financially-disadvantaged Africans by not only levelling the playing field using technology, but also inviting international users to be an integral part of the ecosystem."Afreum St.George's Building 2 Ice House Street Hong KongMedia Contacts: media@afreum.comAbout Afreum Afreum was founded on 5th October, 2020 with the launch of the Afreum Whitepaper, which outlines an ecosystem design, and development roadmap for DeFi-like applications and mobile payment apps for Africa, powered by a suite of cryptocurrencies on the Stellar blockchain.The Afreum Ecosystem leverages the AFREUM or AFR token, which is the anchor token of the platforn, the AFRX incentives, and future governance, token, and African utility tokens such as ANGN and AZAR. All tokens are freely exchangeable via the Afreum Liquidity Engine-powered staking and swapping pools, as well as the Stellar DEX. Further information, the Afreum Whitepaper, Afreum Wallet, Afreum Save, Afreum Earn, and Afreum Bridge can all be found at the official Afreum website at https://afreum.com