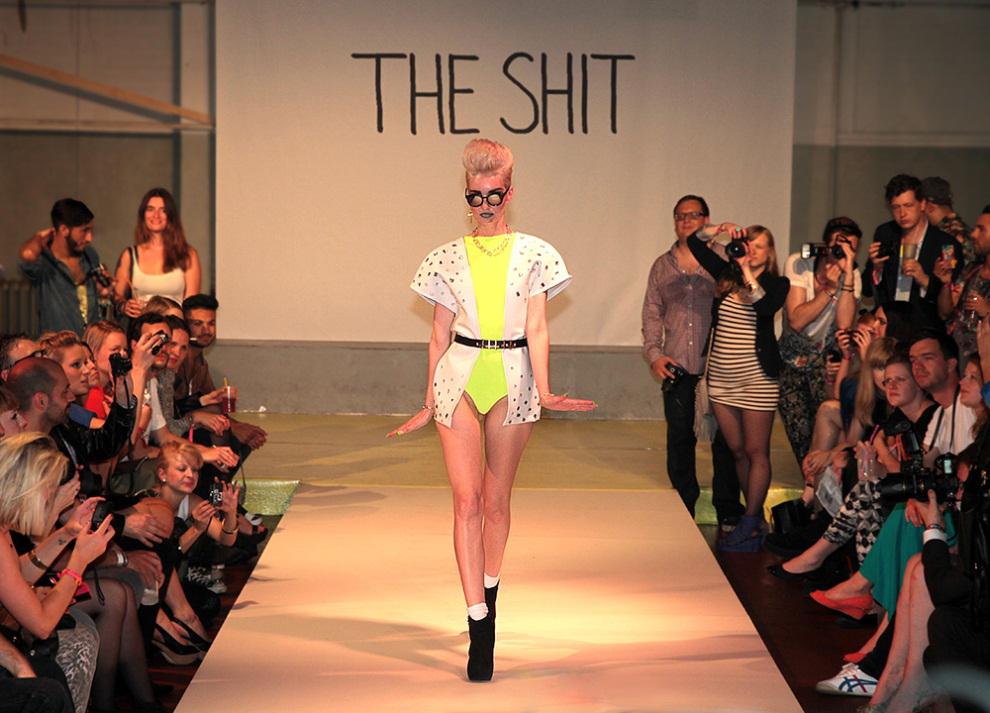 The collection was inspired by 90s fashion

Pinstyle.com , the global community of stylish people, is thrilled to have successfully partnered with German-born model/designer, Bonnie Strange in presenting her new collection, “The Shit.”

On Saturday, 7th July, “The Shit Shop” opened in Berlin’s Prenzlauer Berg followed by a celebrity laden after-party attended by the likes of indie star Peaches. “The Shit,” specializes in vintage clothing, one-of-a-kind pieces from young designers and tattoos. The first fashion show for the brand was held at the after party and showcased an eclectic array of vintage pieces and neon colours which is reflective of Strange’s personal style.

As part of Pinstyle’s official launch into the fashion world, Pinstyle acted as the party’s main sponsor where the fashion show’s 90s theme carried into the overall theme of the party in the form of a 90s rave. Both Pinstyle and Bonnie Strange look forward to continuing the partnership in the future.

Pinstyle is a brand new, innovative platform that allows fashion followers not only to share their favorite fashion looks and trends but also acts as inspiration for stylish people worldwide. As a form of new media, it allows users to create personalized look-books and share them with a like-minded community. Moreover, users can give and receive instantaneous feedback through likes, comments, wants and shares.

For more information or to use images in further publications, please contact Victoria Marshall at vm [at] pinstyle.com.

05-24-2018 | Business, Economy, Finances, B …
ReportsWeb
Beer Market: A Strange Brew of Saturation and Fizzy Potential
Beer Market is a vital recent industry data which covers in general market situation along with future scenario for industry around the Globe. It also consist of major data along with forecasts of a global market along with clear presentation of diagrams (charts and tables). This report focuses on top manufacturers in global market, with production, price, revenue and market share for each manufacturer, covering TsingTao INDIO Heineken Coors Light Brahma Hardin Yanjing Skol Budweiser Bud Light Snow Kindfisher STROHS TECATE MGD Request a Sample on Beer
08-28-2017 | Leisure, Entertainment, Miscel …
National Cryptid Society
Have you seen Bigfoot?
The National Cryptid Society is seeking stories from people who have had an encounter with Bigfoot, Mothman, strange animals and monsters of all types. Have you seen Bigfoot? Have you had a run-in with the Mothman? People see strange things every day, but few people tell their story. Some people may fear being ridiculed for telling others that they’ve seen a cryptid animal. The National Cryptid Society (NCS)
07-07-2017 | Advertising, Media Consulting, …
ReportsWeb
Beer Overview: A Strange Brew of Saturation and Fizzy Potential
Brewers are facing substantial challenges in many key markets, including severe macroeconomic pressures, volume declines and intensifying competition. At the same time, changing demand trends are altering the landscape, requiring adaptation and diversification. This briefing covers some of the main category-specific trends and the potential they hold for boosting future sales or offsetting volume stagnation. Publisher's Beer Overview: A Strange Brew of Saturation and Fizzy Potential global briefing offers an insight
10-10-2016 | Arts & Culture
Strange California
Strange California: Exploring the Weird World of the Golden State
Launching on Kickstarter, Strange California is a new anthology that explores the complex mythologies of the Golden State. The anthology, edited by J. Daniel Batt and Jaym Gates from Falstaff Books, features a diversity of science fiction and fantasy stories that reflect the unique landscape of California. From Hollywood to Santa Cruz to Tahoe, California is a nexus that both attracts and burgeons the strange of our world. Strange California
11-17-2010 | IT, New Media & Software
Strange-Logic.com
Strange-Logic.com Provides Great Web Development Services at a Cost Effective Pr …
Next time you are looking for expert web developers try Strange-Logic.com (http://www.strange-logic.com/) to get great Web Development Services at cost effective prices. Hiring dedicated web developers from a recommended web development company will ensure you get the web development services that will make your online presence as effective as possible, so you get a good return for your business. Their team of professional web designers works with you
08-18-2008 | Leisure, Entertainment, Miscel …
BB Hollywood reports
STRANGE CREATURES running loose downtown bring fantasy & color to San Diego's 48 …
Monsters? Aliens? Nope. It was a group of unusual actors pushing a hospital gurney up and down the city's downtown streets while in full makeup as ogres, thanks to the magic of Victor Ciccarelli, PhotoChimera, and Quixana Productions. Residents stopped their cars and raised their eyebrows in shock, surprise, and amusement as a troupe of green creatures raced around the streets of San Diego pushing a hospital gurney. But rather
Comments about openPR
We publish our press releases on openPR.de because we like people who are "open" - just like us.
Frank Obels, CEO, INCONET - Informationssysteme, Communication und Netzwerkberatung GmbH