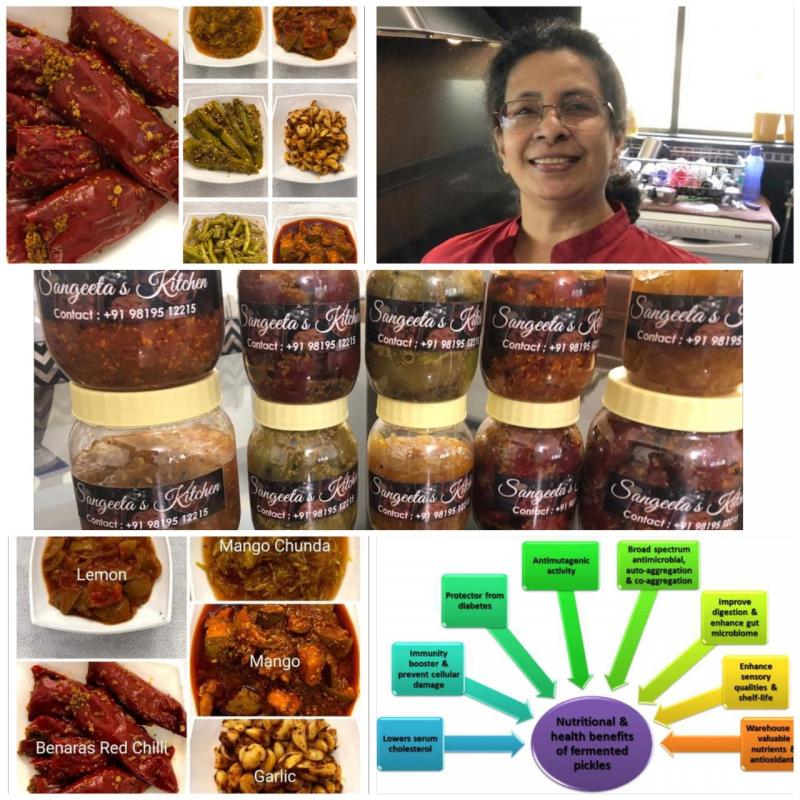 There is an old saying which goes as “Pariwaar Mannat aur Duaon ke Bina, Ghar Pariwaar ke Bina, Khana Achar ke Bina Adhoora Hai” meaning “Family without vow and prayers, home without family and food without pickle is incomplete. Pickling is an ancient gastronomic craft (predate to 2400 BCE) of preserving food in brine and / or vinegar by ancient civilizations which include Egyptians, Chinese, and Indians. Dutch word Pekel meaning brine (salt + water).is the root for English word pickle. Pickles are fat-free and low in calories, but they are also low in most other nutrients, except for sodium. Pickling is a method of cooking with salt. It is incorrect to assume that using salt for pickle making is a Western style while using oil is Indian style. It is actually salt that eats up the sugars of the vegetable being pickled and creates lactic acid bacteria to thrive and win the race, which aids preservation, fermentation and removal of potential bad bacteria. The unfermented pickles may be made by salt stock route involving concentrated brine up to 16% salt (sodium chloride) and the vinegar route where the raw materials are packed in vinegar (acetic acid) with salt. Fermented pickles which act like probiotics may be sweet or sour. The sour fermented pickles are made by submerging raw materials in dilute brine (2–5% salt). In sweet fermented pickles, they are preserved by a combination of lactic or acetic acid, sugar and spices.Achaar a catch-all term for pickle, is a popular condiment in Indian cuisine. While Pickles north of Vindhyas are typically made with mustard oil, the South Indian style is made with sesame oil. Achaar adds a tangy, sweet, and salty heat, whether on its own as a side dish or paired with rice, stews, or layers of paratha. Oil plays the role of a preservative by aiding to seal the air (oxygen) from the pickle thus increasing the longevity of the pickle. It is said that stable oils that are cold pressed work better. Born in a Marwari family in the 60s, Sangeeta Poddar aspired to do something in her life. Being the last born in the family, she was the apple of her father’s eye. She was married at an early age in a joint family, which meant formal education was cut short. Time was going by and in between kids growing up, she continued to fuel her creativity by decorating gift hampers for families during festivals and experimenting with food. For Sangeeta NGO Street Smart was a mission with passion and she used her spare time to teach slum kids. The lockdown from last year put a spanner into that also. The daily routine of watching her family members doing finger licking after eating the pickles made by her inspired her. This is of course different from Shahrukh Khan dialogue of finger licking as a substitute for napkin after eating in a dhaba in the superhit fim Raju Ban Gaya Gentleman. The joint family system had taught her risk taking and she decided a few days back to launch Sangeeta’s Kitchen with several decades of her own experience and time tested grandmother traditions with the aim of nurturing her NGO devoted to welfare of slum kids with the proceedings. Sangeeta presently offers various pickles which include Green chilly stuffed, Mango , Mango grated sweet, Green chilly Kanji, Garlic, Lemon, Red chilly, Green chilly masala and all time favorite Mix vegetable. Sangeeta is also a proud participant of Reliance Fresh Lockdown cooking show where she won laurels. The minimum packing size offered is 250 gms and presently due to lockdown can ship in Mumbai and around only. Orders above 1 kg carry free delivery offer too. Sangeeta’s husband Vijay Poddar (Poddy) a well known alumnus of institution of excellence Birla Institute of Technology and Science – BITS Pilani who had played a stellar role in establishing the not for profit Pilani Atma Nirbhar Resource Centre – PARC says that Sun, Moon and Talent can not be hidden for long. In addition to pickles, Sangeeta’s kitchen is gearing up to offer a variety of sweets. With a twinkle in her eyes, when she says that eating pickles restores electrolyte balance, eases muscle cramps, controls blood sugar, provides antioxidants and the global pickles market is projected to register a CAGR of 3.41% during next five years, there is much more to happen in coming times. Is it time to hear Pink Floyd Another Brick in the Wall lyrics We don't need no education or say Picture abhi baki hai mere dost.Sangeeta Poddar Land’s End, Bandra West, Mumbai 400 050 Phone: +91 9819512215 Email: sangitasaraogi2011@gmail.comSangeeta's Kitchen is a Mission with Passion to raise funds for NGO Street Smart which address welfare and education of slum kids.