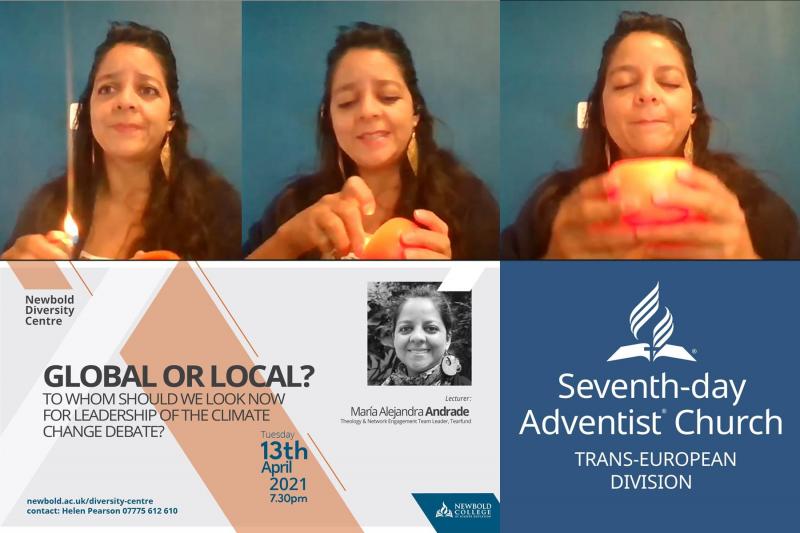 The Trans-European Division of Seventh-day Adventists is promoting a conference that took place on April 13, 2021 at Newbold College of Higher Learning, a Seventh-day Adventist institution in the United Kingdom. The conference dealt with climate change and was led by María Alejandra Andrade Vinueza, a radical evangelical eco-theologian from Ecuador. Who is María Alejandra Andrade Vinueza? She is a promoter of the veneration of Mother Earth, indigenous spirituality, Roman Catholic social teaching, ecological sins and the idea that the divinity of God is both male and female.During the lecture at Newbold College, María Alejandra Andrade Vinueza stated: “One can dig the earth, one can sell the earth, one can buy the earth because it is the earth. But we cannot do the same with the Mother. The Mother cannot be sold and bought. The Mother is to care for. The Mother is to love for. The Mother is to venerate. We need to have that same attitude with Mother Earth because it is the only one that we have.” She also said the following to Seventh-day Adventists: “We belong to nature. We belong to the land. The land does not belong to us. We don’t live separate from the land. Actually, we are part of that. It’s a big ecosystem where human beings are just one part of that.”This type of Eastern pantheism is opening the door to demonic activity. They are mixing pagan spirituality with Christianity. The Omega of Apostasy is making its way into Adventism through Mother Earth philosophies. Pagan “Christian” theologians from Babylon are teaching spiritualism in our institutions. And this is being promoted by an entire division within Adventism. Why can’t our people see the danger with this? Mother Earth spiritualism under the cloak of environmentalism is causing our people to “seek them with familiar spirits” (Isaiah 8:19, 20). Click to see the videos, pictures and to read the full story: http://adventmessenger.org/the-trans-european-division-of-seventh-day-adventists-promotes-mother-earth-spirituality-conferences/Contact: Andy Roman, Publisher Address: Advent Messenger, PO Box 96, Dover, OK 73734 Phone: (888) 299-2119 Website: www.adventmessenger.org Email: adventmessengers@gmail.comAbout: Advent Messenger provides news and commentary on current events, top stories, social trends and political and religious events. For more news visit www.adventmessenger.org

12-18-2020 | Health & Medicine
Gonadosan Distribution GmbH
Choline - important for mother and child
Already a few months prior to a planned pregnancy, experts recommend targeted supply and supplementation with important vital substances, especially folic acid. And also during pregnancy and breastfeeding, targeted compensation of increased nutrient requirements is of great importance. The recommendations apply to folic acid, the vitamins B12 and D and the minerals magnesium, iron and iodine in particular. Choline for your baby’s neural development In addition to these established recommendations, nutritionists
12-10-2020 | Fashion, Lifestyle, Trends
SRB Botanica
MOTHER-DAUGHTER HERBALISTS ANNOUNCE FORMATION OF NEW COMPANY, SRB BOTANICA
Mother-daughter duo Stephanie Rose Bird and Olivia Bird have teamed up to launch SRB Botanica, an online purveyor of herbal products designed to pamper, protect, heal and cleanse the body, mind and spirit using responsibly sourced botanicals from Africa and around the world. The Black Woman owned company has debuted two all-natural, all-healing products. Arnica Salve(ation) Pain Relief Formula features a proprietary blend of organic African shea butter and other oils
03-24-2017 | Leisure, Entertainment, Miscel …
Music Promotion Club
Marqesa’s “Earth Is Our Mother” to Enjoy Positive Vibes
Deep home is a subgenre of house music. Several notable musicians are performing on this genre since 1980. Well, recently soundcloud has introduced a new creative person who is setting some new direction in deep house genre. Marqesa, the new singer has released a new song, “Earth is Our Mother”, based on deep house genre of music. Throughout the track you'll feel a soothing musical mix. The tune is softer
04-01-2011 | Health & Medicine
Love Is All We Need
Sponsor A Mother For Mother's Day
1 April 2011 - Love Is All We Need is calling for people to sponsor a mother this Mother’s Day. Donations will go towards mobile mothers in South Africa, caring for the thousands of HIV/AIDS orphans in the poorest and most vulnerable communities. Love Is All We Need supports mobile mothers in the Sweetwaters community near Pietermartizberg, South Africa. There are over 6,000 orphans in this struggling community, and in
02-18-2008 | Industry, Real Estate & Constr …
Miracle Steel Structures
Miracle Truss Pre-Engineered Steel Buildings Withstand Mother Nature
Miracle Truss, a division of Miracle Steel Structures, Inc., is preparing for the 2008 tornado and hurricane seasons by reminding consumers of the importance of constructing steel buildings that will withstand the weather elements in their particular geographic region. In addition to being easier to build and more cost effective than most conventional buildings, pre-engineered steel buildings are designed to protect individuals and their valuables from Mother Nature’s unpredictable patterns. “Now
05-08-2007 | Associations & Organizations
Hillsides
Mother/Daughter Charity Organization Receives Community Award
(PASADENA, CA)—During Hillsides Angel Awards Ceremony, National Charity League-Pasadena Chapter (NCL) received the Hillsides Community Angel Award for its ongoing community support and creating safe places for many vulnerable populations. As a philanthropic organization that fosters mother-daughter relationships committed to community service, leadership development, and cultural experiences, NCL Pasadena has left a mark on Hillsides and many other nonprofit organizations. Filling the community needs, NCL Pasadena has touched
Comments about openPR
Your portal is fast, simple, and easy to use. Others may have more functions but they also demand more editing time, you have to preformat the text in order to achieve a good result etc. I think openPR is really fantastic!
Andreas Knepper, wallmedien AG