The Role of Community Placed Under the Spotlight 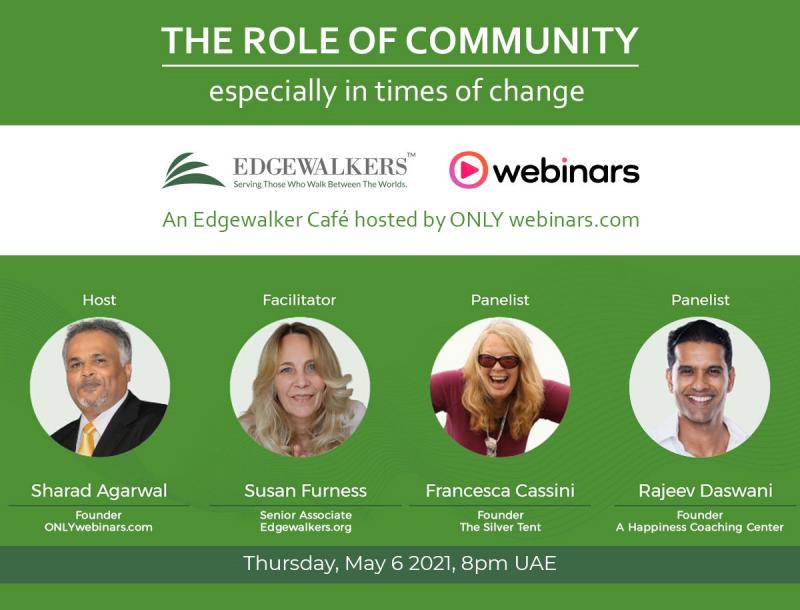 The Role of Community Placed Under the Spotlight Edgewalker Café set to attract a global audience to the conversation May 6 2021, 8pm Dubai, 5pm London, 12noon New York - The Role of Community, especially in times of change.May 2021, Dubai UAE: Participants from the UAE, Bahrain, India, the UK and numerous locations in Europe and North America, including Canada and Hawaii are set to take part in an online conversation on the role of community on May 6. The Edgewalker Café is jointly hosted by Dubai-based Sharad Agarwal, founder of ONLYwebinars.com with Dr Judi Neal, the founder of Edgewalkers International and author of the book, Edgewalkers, people and organisations that take risks, build bridges and break new ground. Sharad said the hour-long event on May 6 will take a panel format featuring two community builders, Francesca Cassini, founder of The Silver Tent, and Rajeev Daswani, of A Happiness Coaching Centre. The conversation is facilitated by region-based alternative strategist Susan Furness, an associate of Dr Judi since 2007. “During this past year community has played such an important role as we have all navigated change with no sense of the end game. What we do know however is that many things are indeed changing, and stability in community can be a great support,” Sharad said. He added that the Café presenters host active online community groups in excess of 75,000. Susan explained that Dr Judi’s research found that Edgewalkers are those who are on the cutting edge of human evolution and committed to making a positive difference in the world. “Edgewalkers use their potential by integrating their intellectual, emotional, physical and spiritual energy in service to something greater than themselves, and always for the greater good of the global community. “Indeed, it is said that Edgewalkers are the pioneers and change makers in organisations and in society,” she concluded. The Role of Community, especially in times of change. An Edgewalker Café hosted by ONLYwebinars.comMay 6 2021, 8pm UAE, for around 75 minutes. www.onlywebinars.com www.edgewalkers.org www.thesilvertent.com www.rajeevdaswani.comMedia Contact ss@strategicsolutionsonline.comStrategic Solutions