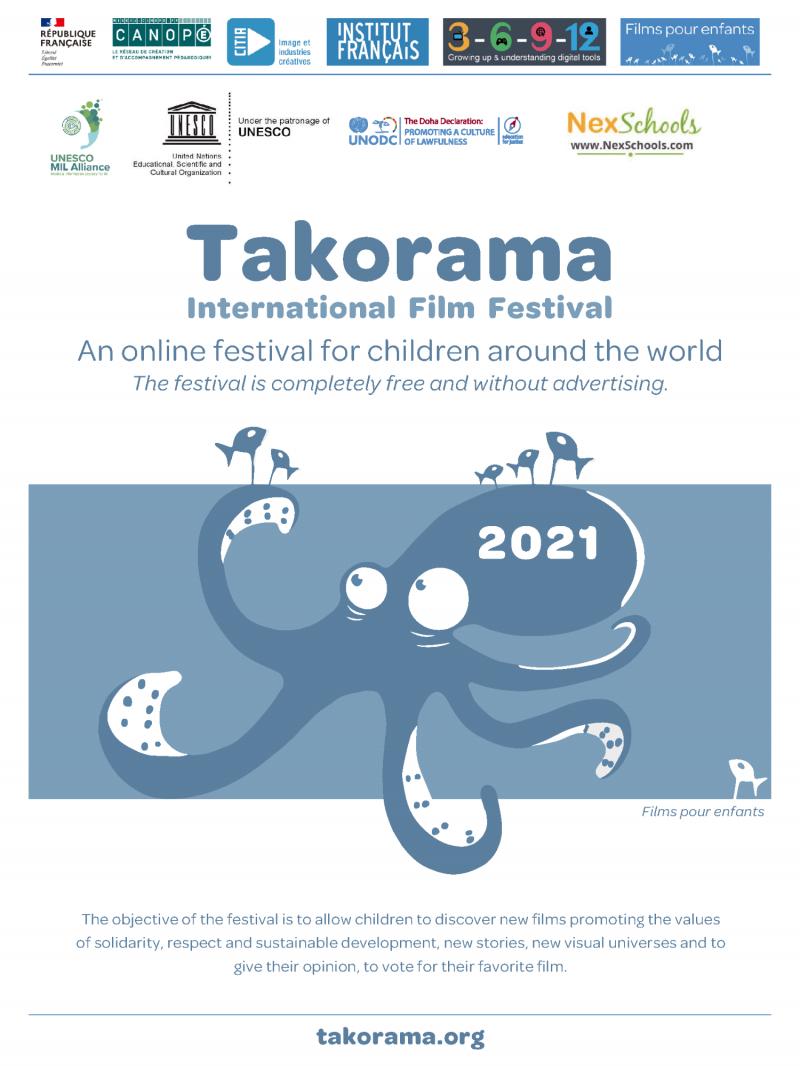 Release Date: 28 April 2021 NexSchools partners with Takorama Online International Children’s Film Festival 2021, under the patronage of UNESCO to promote the film festival among schools and children in India. NexSchools has partnered with the International Film Festival Takorama, under the patronage of UNESCO. The festival of short films addresses the theme of solidarity, tolerance, respect for others, and sustainable development.Olivier Defaye, President of NPO "Films for children" said, “Many children in India will discover and enjoy the films but also give their opinion and vote for their favorite films. We hope the festival will be an opportunity for some to discover a vocation as a budding cinephile, but also for all to consider images not just as entertainment but as a tool to communicate their vision of the world.” The film festival has come in a time when India is facing a very difficult situation and children are all homebound. This international festival is exploring the theme of humanism and ecology, entirely free of charge and without advertising, with the aim of enabling children to stay in contact and pursue schooling activities at home. The films are available in 20 languages including Hindi, Bangla and English. The objective of the festival is to offer children original short films on the theme of solidarity in a free and educational context. Each short film is accompanied by a pedagogical sheet. Mradula Singh, Founder & CEO of NexSchools informed, “The Takorama Film Festival brings films on various topics to support social and moral understanding, to teach values and character. It is available for children from preschool to high school.” She added, “During the time when we are facing many challenges in online schools the use of films can be effective in learning as an alternative tool besides adding it in the classroom instruction can be entertaining and welcoming for engagement.” During the festival, the children are invited to vote for their favorite short film but also to participate in educational activities. Beyond the cinematographic and artistic education, the festival aims to assert the educational dimension of cinema by positioning it at the side of literature and painting as a resource liable to accompany and support the teachers as a whole and to allow the children to perceive animated images not only as an entertainment but also as a communication tool. The festival is presented by Films Pour Enfants and in partnership with UNESCO, UNDOC besides many other international partners.More information is available at - http://www.nexschools.com/article-details/Takorama-Online-International-Childrens-Film-Festival/1200.aspx https://www.takorama.org/hiAddress: Pune, India 411021About NexSchools The NexSchools is a private entity working with one mission to make awesome education and parenting. NexSchools vision for education is to look beyond academic achievements to build a positive community with a strong ethos.NexSchools supports, advocates and promotes social causes both in India and globally, public or private that creates an environment of happiness, media and information literacy, online safety, or supporting Sustainable Development Goals. Make Happier & Safer Internet Experiences - the campaign for Cyber Safety Awareness by NexSchools is a holistic and pragmatic approach for tacking online safety challenges in schools. To achieve this objective, age-specific educational resources with certificate courses and books (primary and secondary education) are developed for positive and responsible Internet use. The goal is to prepare a new generation of learners equipped for the future digital media literacy skills as per guidelines provided in UNESCO Media and Information Literacy framework.As a part of the partnership with the TAKORAMA Festival, NexSchools happily ensures the communication and promotion of the film festival in India. Link: www.NexSchools.com Contact: info@nexschools.com

04-26-2021 | Arts & Culture
New Media Film Festival
New Media Film Festival
NEW MEDIA FILM FESTIVAL® 1st FEST TO ADD NFT TO PROGRAMMING LINEUP First Festival For New Media Storytelling Showcases 119 Content Creators from 23 Countries June 2-3, 2022 Judges from BBC, Emmys, HBO, Marvel and PBS to present $45,000.00 in Awards Los Angeles, April 19, 2021 – The New Media Film Festival® (www.newmediafilmfestival.com) is the first event of its kind in the world to accept non-fungible tokens (NFT) in competition. During its 12th
02-04-2021 | Arts & Culture
New Media Film Festival
Annual Film Festival
New Media Film Festival® introduces new technology, and the communication of ideas through panels and Q & A’s to implement a more expansive use of 21st-century technology in storytelling for both artists and content creators. The 12th New Media Film Festival is slated for June 2-3 2021 at The Landmark in Los Angeles. Serving as the very first film festival to distribute micro-content, to screen AI created film, a holographic
08-13-2020 | Arts & Culture
New Media Film Festival
New Media Film Festival
INNOVATIVE STORIES & TECHNOLOGY CREATORS FINALLY HAVE THEIR DAY – AUGUST 15TH 2020 NEW MEDIA FILM FESTIVAL AWARDS SHOW The 121 New Media Films & Content from 32 countries that are nominees in the 11th Annual New Media Film Festival® voted. Resoundingly the nominees voted to have an online awards ceremony and forgo an in person festival this year. With 38 World – 15 U.S., and 30 L.A. Premieres and the
10-24-2018 | Industry, Real Estate & Constr …
SUCO Robert Scheuffele GmbH & Co. KG
SUCO Image film 2018
To celebrate the company's 80th anniversary, SUCO presented a new image film of the social media plattform YouTube. The 2-minute image film was conceived and realised by MSB-Films: The film focuses on the core values of the SUCO brand, which are also reflected in the new company vision: * Quality in the area of internal training and further education of specialists and managers as well as multi-stage quality assurance throughout the entire
05-03-2017 | Arts & Culture
Nine Ladies Film
The Wasteland Film
The Wasteland a modern day mystery thriller from Nine Ladies Film, scheduled to be shot in the Derbyshire Dales in July 2017. The story follows the journey of Laurence, a loner, a man with a hidden past, who arrives in a small village on the offer of work from a local farmer Frank. Taking the job of rebuilding a field boundary stonewall, Laurence becomes intrigued with the mysterious figure of Holly,
01-24-2013 | Media & Telecommunications
IFT international, inc.
Executive AG protection film
With the beautiful retina display of the new Apple iPad and other top of the line mobile devices, users are more concerned than ever with protecting their screens from daily abuse and optimizing their viewing experience. Now IFT launched an innovative technologies to long line of Screen Protector products, Anti-Glare protection film which provide the ultimate protection for mobile devices. The IFT’s Anti-Glare protection film primary advantage is that it can
Comments about openPR
OpenPR is clearly structured and remains true to its principle of confining itself to the essential parts. OpenPR has proven to be a very good and reliable partner to our media agency: Within the shortest time the releases are online and go down well with the media representatives. The success of OpenPR is reflected in the steadily increasing number of press releases. It is good that OpenPR exists!
Ursula Koslik, Director Marketing & PR, F+W Hamburg