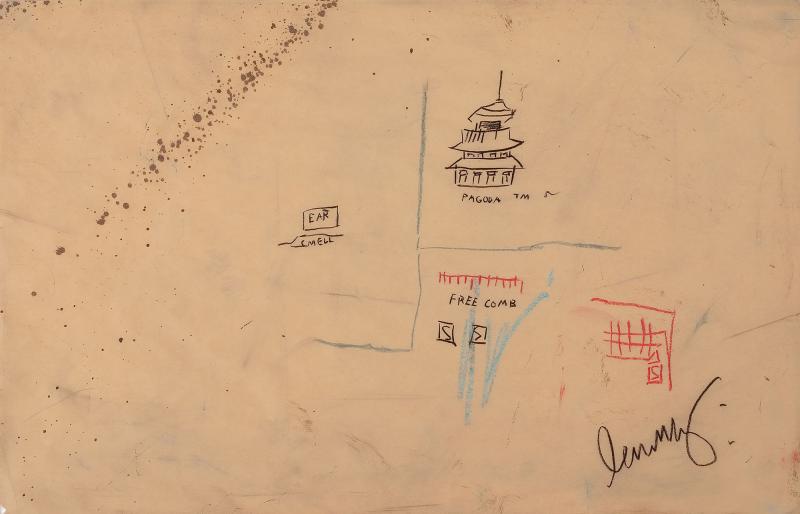 NEW YORK, April 26, 2021 -- With bids starting at a single Ethereum, the first Non-Fungible Token ("NFT") featuring original work of world-renown artist Jean-Michel Basquiat (American,1960-1988) will go to auction beginning APRIL 26, 2021 thru APRIL 30, 2021 at https://opensea.io/accounts/DaystromNFT. The online auction is sponsored by DAYstrom, the Emmy-winning, multi-segment mindshare behind the iconic BowieBank who anonymously said; "Markets no longer trade upon consensus alone, it's anonymity, exclusivity, authenticity and individuality that determine value on the Blockchain today; NFT's are an asset whose time has come."The highest bidder will receive an encrypted digitized token of Basquiat's original work captioned "Free Comb with Pagoda" (mixed media - 1986) conveyed on the Ethereum blockchain, along with all related IP and copyright in perpetuity. The artist's work and signature have been certified by the Authentication Committee of the Estate of Jean-Michel Basquiat, with provenance including Michael Petronko Gallery in New York, private collection in Nevada, Heritage auction as lot #64054 in 2012 and finally sale to private collector in 2015 where it remains. At the winner's discretion, the original artwork will be deconstructed, leaving the NFT as the only remaining form of Basquait's work to exist.Basquiat is widely considered among the most highly valued modern artists in the world and appears in permanent collections at LACMA, MoMA, Metropolitan Museum of Art and the Whitney Museum of American Art. His work has shattered public sales records across the globe and periodically appears at Christie's, Bonham's & Sotheby's where his work brought $110 million at auction in 1997. Although the 27-year-old "Radiant Child" died in 1988 after only a decade as a professional artist, his impact remains eternal.Contact: Day Strom ‪(856) 209-5673DayStromNFT 1 E 161 St Bronx NY 10451press contact: dayDaystrom Is The Mindshare And Digital Provocateurs Who Conceived David Bowie's Iconic Online Bank And Anonymously Believe "Value Has Become Increasingly Fungible, Diluted And Unstable In Our Evolving Metaverse And There's A Tremendous Spike In User Demand For Exclusivity. NFT Assets Provide This Exclusivity And Create An Entirely New Online Value System That Was Previously Unimaginable; Authenticated Sale Of Virtual, Culturally Significant Artwork Such As "Free Comb With Pagoda" Just Wasn't Possible Prior To Blockchain Technology".