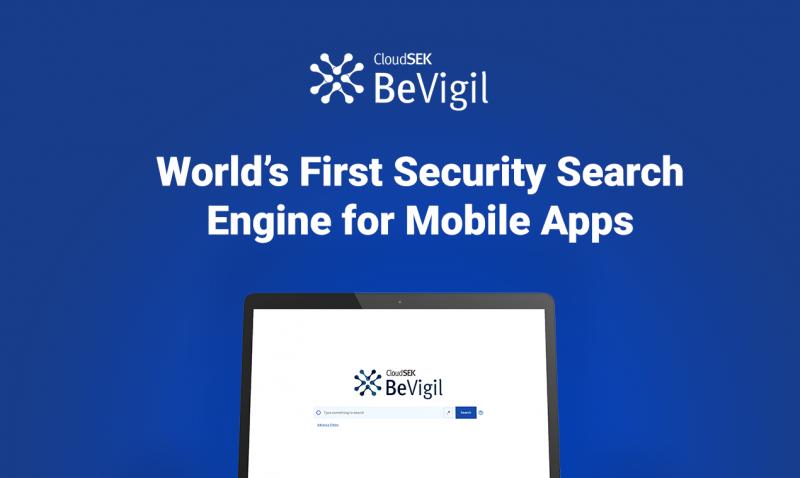 CloudSEK, an Artificial Intelligence (AI) powered digital risk monitoring company, which recently bagged the NASSCOM-DSCI Excellence Award for Security Product Company of the Year 2020, has announced the launch of BeVigil, the world’s first security search engine for mobile apps that will empower individual users, app developers, and security researchers alike. Despite having over 8 million apps to choose from, users don’t have a mechanism to determine the security posture of apps that they install on their devices. Apart from the standard Google Play Store and App Store there are 80+ third-party app stores that users can download apps from. Yet, there is no comprehensive tool to evaluate their validity and security. There has also been a recent spate of supply chain attacks on mobile apps, in which their threat actors embed third-party SDKs with malicious code, which are then re-used by app developers. To address this gap, and to empower users, CloudSEK has pioneered the first-ever security search engine for mobile apps. With BeVigil, individual users and security researchers can now check the risk rating of an app, check the list of permissions it requests, and ensure it is not malicious. BeVigil’s familiar, easy to use search engine allows users to simply search for the app name to get a risk rating that is indicative of the app’s overall security posture. App developers can also proactively upload their apps to BeVigil to identify vulnerabilities and remediate them before the apps are listed on various app stores. In addition, security researchers can perform in-depth investigations on millions of apps using the metadata of the apps and by searching the app packages for code snippets, keywords, strings, or other expressions that are indicative of vulnerabilities. This information can be then used to identify patterns, correlate threats, and rectify false positives. The scan reports generated by BeVigil are made available to the global CloudSEK community. In short, the security community now has a VirusTotal equivalent for mobile apps. Talking about the inspiration behind BeVigil, Rahul Sasi, Founder and CTO of CloudSEK said, “I was recently appointed by the Reserve Bank of India to study the security aspects of digital lending apps. During this process I realized that there is no product that can analyse thousands of apps and identify fraudulent ones. Also, a significant number of apps don’t go through any security reviews owing to the high costs of testing. But with BeVigil, users can ensure they install only secure apps and app developers can use it as a free solution to audit their apps.” He added, “Mobile applications often have vulnerabilities that compromise users’ safety, data, and privacy. BeVigil will enable security researchers and app developers to uncover and remediate these vulnerabilities and make them safer for users.” Adding to his comments, BeVigil CTO Shahrukh Ahmad said, “The team has already started working on expanding the scan coverage to include apps across various categories. We are also adding relevant functionalities such as malware identification, capability to identify more app vulnerabilities, resilience checks, asset extraction, and improved scoring algorithms. The idea is to make the most comprehensive mobile app scanner that allows individual users and security researchers to identify insecure apps, and enables app developers to visualise and resolve critical issues before they ship their app to multiple app stores.” 901, MSM Corner, 7th Main Rd, HAL 2nd Stage, Appareddipalya, Indiranagar, Bengaluru, Karnataka 560038 sahil@cloudsek.com Founded in 2015, CloudSEK is on a continued quest to develop intelligent, automated systems that can detect and analyze threats, thus enhancing the scope and efficiency of its customers' defenses.

12-23-2020 | Media & Telecommunications
CloudSEK
CloudSEK Wins NASSCOM-DSCI Excellence Award for Security Product Company of the …
Bangalore, 22 December 2020: CloudSEK was recognized at this year’s NASSCOM-DSCI Excellence awards, India's highly esteemed awards in the security product industry. Established with the mission of building a trustworthy network of Indian companies, the services of which can be outsourced to clients across the globe, NASSCOM’s (The National Association of Software and Services Companies) DSCI (Data Security Council of India) honors and rewards individuals, corporate organizations, as well as
11-13-2020 | IT, New Media & Software
CloudSEK
CloudSEK bags Cybersecurity Award at NASSCOM Emerge 50 2020
Bangalore, 12 November 2020: CloudSEK’s XVigil was recognized at this year’s NASSCOM (The National Association of Software and Services Companies) Emerge 50 awards, India's most prestigious awards in the software product industry. Since its inception in 2009, Emerge 50’s mission has been to find and recognize the most innovative Indian software product companies. The awards have been exceptionally successful in identifying companies with great potential. So much so that 3
07-02-2020 | IT, New Media & Software
CloudSEK
AGS continues to thwart cyber threats with CloudSEK’s XVigil
AGS Transact Technologies ramps up cyber security measures with CloudSEK’s XVigil, to secure soaring digital transactions. Bengaluru, Mumbai – 25 June 2020 –India’s leading providers of end-to-end cash and digital payment solutions and automation technology solutions, AGS Transact Technologies Limited (AGSTTL), has been harnessing CloudSEK’s Artificial Intelligence (Al) powered digital risk monitoring platform XVigil since July 2019. And given that more and more Indians are adopting online payment options, AGS has
06-02-2020 | IT, New Media & Software
CloudSEK
CloudSEK continues to foster young leaders; promotes Bofin Babu to VP of AI and …
Digital risk monitoring company, CloudSEK announced the promotion of Bofin Babu to Vice President, AI and Data Engineering. In his new role, Bofin will lead the Data Acquisition, Machine Learning, and Threat Intelligence teams, to further CloudSEK's mission, to build the world's fastest and most reliable AI technology, that identifies and resolves digital threats. It is not every day that a Developer gives up a stable career, for a demanding and