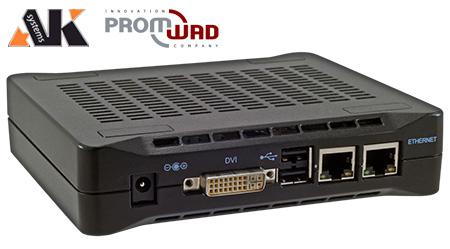 The Promwad Innovation Company, the largest developer of electronics in Eastern Europe, has completed the development of a new product for a Russian customer, AK-Systems. The new development is the AK1100 thin client, a compact computer for networks with a client-server architecture, which serves as a point of access to a virtual desktop.Promwad’s engineers have designed the product’s hardware and software platform, enclosure, and graphic interface. They have also manufactured a device prototype. At the final stage of the project, the AK1100 thin client has been successfully certified and launched into batch production.This new product for the SOHO market is based on the Marvell 88F6282 processor implemented on the Sheeva kernel (it operates at frequencies of up to 2GHz). DDR2, a total of 1 GB, was used as a memory card. NAND Flash 4GB was used for storing user data. The thin client configuration also includes a graphic core with HD video support and the possibility of connecting an external display with a high resolution (up to 1600x1200x32 @ 60NI).The development of the device involved the implementation of a wide range of user interfaces: four RS232 USD ports and DVI outputs, 2 x Gigabit Ethernet, WiFi 802.11 b / g / n and Bluetooth. Enhanced protection against information leakages was implemented using java keys, information security system agents, as well as a USB connector for Security Tokens. The software of the AK1100 client was developed for several configuration options: OS ARM Debian 6.0 Linux and a distribution based on OpenEmbedded or Windows Embedded. The software package also includes: Firefox web browser; vlc, mplayer and beepmp media players, as well as Linphone VoIP / SIP-client.Migration from desktop PCs to thin clients is a popular current trend in companies that make use of high technologies: IT business companies, banking and retail sales, transportation companies, storage facilities, call centers, educational institutions, etc. The virtualization of the operating environment helps significantly reduce hardware costs, enables more efficient power consumption, as well as increases access security and data storage.Promwad Innovation Company (www.promwad.com) is one of the largest independent electronics design houses in Eastern Europe, IPC member, founded in 2004. The company offers a full cycle of electronic devices and embedded systems development for mass production. Its core competences include multimedia, automotive, datacom, GPS/GLONASS electronics and etc. The company partners are Texas Instruments, STMicroelectronics, Fujitsu, Marvell, Analog Devices. Promwad’s customers are manufacturers of electronic devices in Western and Eastern Europe, USA and Canada.Promwad Innovation Company Address: building 16, 68 Leningradsky Avenue, Moscow, 125315, Russia Email: pr@promwad.com

11-29-2012 | IT, New Media & Software
Promwad
Electronica 2012 in Munich: a Report by Promwad Innovation Company
November, 16 was the final day of electronica 2012, the International Trade Fair for Electronic Components, Systems and Applications, which took place in Munich, Germany. Its result was 72,000 visitors from 78 countries. A total of 2,669 exhibitors, including Promwad Electronics Design House showed the present and future of the electronics world. The central topic in all halls of the fair was a growing sector of automotive electronics. This trend was
11-12-2012 | IT, New Media & Software
Promwad
What new contract developments will be coming to Electronica 2012?
Promwad Innovation Company will unveil its latest developments in the telecom/datacom, navigation, and automotive areas, within the framework of the Electronica 2012 Exhibit running November 13 to 16: Jade Automotive platform, single board computer AM1808, SDR and CPE Platforms, and a navigation and communication unit based on the GPS/GLONASS technology. Jade Automotive Hardware and Software Platform — a sophisticated CPU module for the on-board computer based on the graphic processor Fujitsu
11-12-2012 | IT, New Media & Software
Promwad
Promwad to Unveil Its Developments at Electronica 2012
On November 13 -16, Promwad Innovation Company takes part in the largest international exhibition of components and assembly, Electronica 2012, in Munich, Germany. The company presents its latest developments made for the Russian electronics market. Promwad’s projects are made on a turn-key basis, which involves the full development cycle, from product concept to prototyping. The visitors of Promwad’s stand will have a chance to see the following devices: the DO-RA portable
05-06-2009 | IT, New Media & Software
Promwad
New Service From Promwad For Google Android Platform
Google Android platform becomes increasingly popular for latest cutting edge embedded system developments. The growth of Android developments is visible not only at conventional smart-phone market but also in media-rich consumer electronics like Set-top box appliances, netbooks, portable media players (PMP) etc. Promwad company replies to the demands of industry by providing new Android platform related services to the customers. Because of Embedded Linux nature of Google Android platform, backed-up by