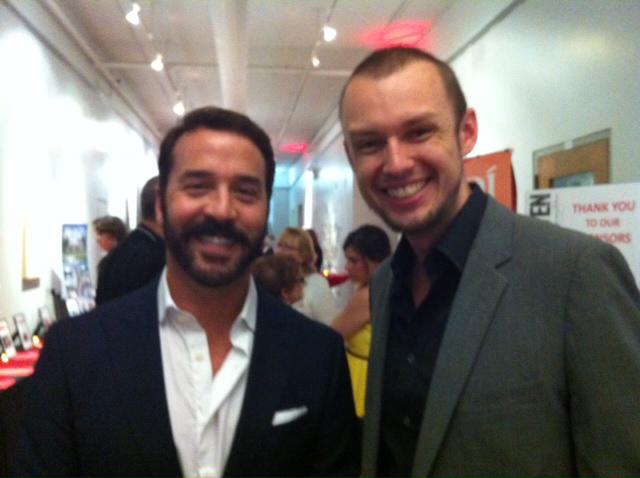 June 25, 2012, Evanston, Ill.-- Entrepreneur Vito Glazers joined Emmy award-winning actor Jeremy Piven, several Chicago Bears players, Hollywood executives and Chicago creative leaders at the Piven Theatre Workshop Gala, where they discussed opportunities to help and build Chicago’s acting community. The annual event, which took place at Northwestern Univesity on June 23, benefits the Piven Theatre Workshop, which trains student actors – many of whom are on scholarship. Born in Manhattan and raised in Evanston, Ill., Piven is most known for his role as Ari on the HBO series “Entourage,” which ended last fall. He is an alumnus of the Piven Theatre Workshop founded by his parents, Byrne Piven and Joyce Hiller Piven, a Chicago stage actor and Emmy award winner. "Ari Gold's character on Entourage is one of my favorite characters portrayed on television,” Glazers said. “It was an exciting honor to get to meet Mr. Piven and thank him for all the great roles he has played." Piven has been filming “Mr. Selfridge,” about an American who founded British department store Selfridges. Glazers is the patriotic CEO of internet advertising firm, CPATank in Chicago, IL. His progressive understanding of online advertising and Internet marketing took him from college student to self-made millionaire by the age of 25. He now dedicates his life to serving the world's largest brands, promoting philanthropy and donating his time and expertise to students and Universities. He supports numerous causes, including orphans, widows, thought leaders, education, entrepreneurship and the arts, which he believes play a pivotal role to the development of students and culture in Chicago and the world. Theater and acting have a massive impact on American and global culture, and without support from donors, many talented students would not be involved. The Piven Theatre Workshop is his latest philantrhropic recipient. "In the philanthropic community, the theater and the arts are often the first to be overlooked,” Glazers said. “The Piven organization and myself are going to change that.” Learn more about Mr. Glazers by following him on Twitter at http://Twitter.com/VitoGlazers. Follow Jeremy Piven as well at http://Twitter.com/jeremypiven. Contact: Rebecca Ellen www.hollywoodvinegroup.com Press@hollywoodvinegroup.com 630-291-8978 ### Hollywood Vine Group is a small firm offering a full range of services to help develop unique strategies to serve your advertising and consulting needs. We help your business grow by releasing your products and information through social media networks. -Company: Hollywood Vine Group -Address: 875 N. Michigan Ave, Chicago, IL, 60610 -Office number: +1 (323) 775-8158 -Press contact: Rebecca Ellen (630-291-8978)