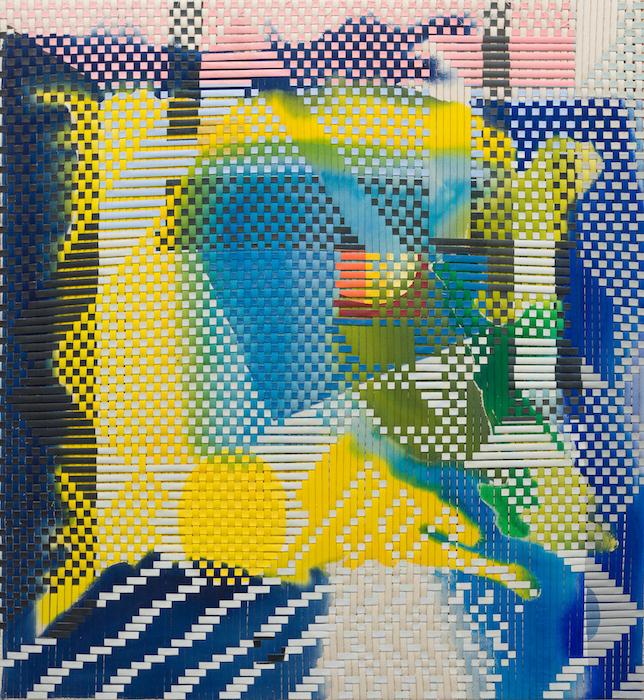 Johansson Projects is pleased to announce a forthcoming solo exhibition of recent works by Oakland-based artist Miguel Arzabe entitled Cóndor de Cuatro Cabezas (Four-Headed Condor), which will be on view to the public [by appointment] from May 8 through July 24. The exhibition’s title is inspired by the ancestral mythology of the indigenous Sacaca people Bolivia, who held a pantheistic conception of the world that featured the transposition and recombination of animal parts into divine beings. These beings continue to be expressed in the textiles of the region that portray pájaros monstruosos, “monster birds,” such as half-puma half-eagle, or a four-headed condor. The works included in Cóndor de Cuatro Cabezas feature intricate canvas and paper weavings that are crafted from strips of painted reinterpretations of artworks by pre-war American abstractionists, which Arzabe weaves into new visual interpretations using improvised patterns inspired by Andean textiles. The four heads of the condor referenced in the exhibition title represent the various ‘authors’ of each work: the two artists whose works Arzabe deconstructs; Arzabe himself as the third artist who then reconstructs their work into a new, mixed form; and the viewer, who then engages with and creates new meanings from the resulting woven piece.Arzabe says, “My weaving practice is a way for me to explore my own identity as an American with Bolivian ancestry. For many mestizos, the origin of the Indigenous bloodline is speculative, since only the European origins were codified. I want to confront the inherent white supremacy within that tendency of generations of families to highlight their European roots while neglecting their Indigenous ones. My work ultimately has to do with recuperation, the act of reinvesting old things with new energy, just as the condor bridges the worlds of the living and the dead.”Johansson Projects 2300 Telegraph Ave. Oakland, CA 94612Johansson Projects is a contemporary art gallery that functions as a curatorial laboratory, creating exhibitions that pair established and internationally-recognized artists with up-and-coming locals. With no show confined purely to gallery walls it prompts viewers to actively engage with artists who explore the mysteries embedded in modernity often using unorthodox materials and methods. Johansson Projects is a locus for curators, collectors, and artists to connect and engage in dialogue with the larger art community both regionally and nationally.

01-25-2021 | Arts & Culture
Johansson Projects
Community Garden
At a time when it feels like the light is finally breaking through the darkness, Community Garden — a group exhibition of seven artists — cultivates an abundance of connections. Using a variety of methods, the artists achieve a naturalism that aesthetically binds their work together into a single gesture, allowing us glimpses and sensations of the open spaces where we once walked freely, and will soon return. Community Garden features:
09-29-2020 | Arts & Culture
Johansson Projects
The Remnants
Amidst the upheaval of 2020, The Remnants featuring Megan Reed and Micah Wood explores what we leave behind and the agency in making as a way to move forward in the form of bold, colorful sculptures and paintings. Junkspace’s iconography is 13 percent Roman, 8 percent Bauhaus and 7 percent Disney (neck and neck), 3 percent Art Nouveau, followed closely by Mayan….Like a substance that could have condensed in any other
07-14-2020 | Arts & Culture
Johansson Projects
Within the Distance
Within the Distance offers viewers an opportunity to wander among a selection of new works by eight artists on view at Johansson Projects West, our virtual venue that traverses interior and exterior space spanning across garden spaces and our Jay Nelson designed treehouse. The paintings, drawings, and sculptures in this exhibition range in their motifs, from landscape to portraiture, and off into pure abstraction. However, they share among them an
03-02-2020 | Arts & Culture
Johansson Projects
A Terrain of Memory: Monuments from the California Landscape
Ido Yoshimto and Blaise Rosenthal create monolithic tributes to the California landscape at Johansson Projects The wilderness of Northern California is difficult to describe with words. Rich and diverse, it has a timeless quality that comes up from the ground and radiates over the landscape. Everything is colored and shaped by what has come before and what is still to come. A Terrain of Memory: Monuments from the California Landscape

01-25-2021 | Arts & Culture
Johansson Projects
Community Garden
At a time when it feels like the light is finally breaking through the darkness, Community Garden — a group exhibition of seven artists — cultivates an abundance of connections. Using a variety of methods, the artists achieve a naturalism that aesthetically binds their work together into a single gesture, allowing us glimpses and sensations of the open spaces where we once walked freely, and will soon return. Community Garden features:
Comments about openPR
9 o'clock: discuss press release with client, 10 o'clock: submit release to openPR, within the briefest possible time release is published and displayed in a prominent place on openPR.de. I am thrilled!
Zehra Spindler, Calypso Now! - Communication Agency