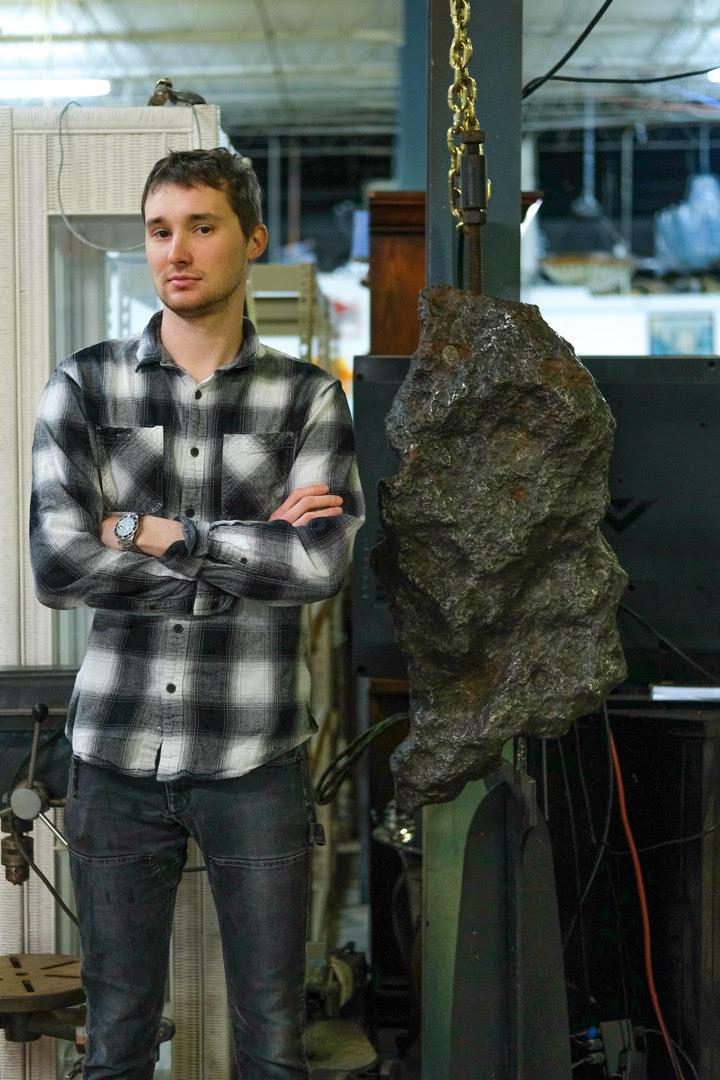 Atlanta, GA, USA, March 24, 2021 -- A museum-quality, 394-pound meteorite – by far the largest specimen of its kind for sale in the world - will come up for bid in an online-only Premier Spring Estate Auction planned for Tuesday, April 6th, at 11 am Eastern time by Gallery 63 in Atlanta. Online bidding is via the Gallery 63 website (www.gallery63.net), plus LiveAuctioneers.com and Invaluable.com.“Meteorites of this size and importance do not come up for public sale very often,” said Paul Brown, who serves as a consultant for Gallery 63, having passed along ownership to his son, Elijah. “It wouldn’t be out of place in any of the world’s museums.” The meteorite, which comes with a custom-built iron stand measuring 74 inches tall, has an estimate of $100,000-$200,000.The meteorite is comprised of various platinum group metals. “Based on that alone,” Brown said, “it’s valued at close to $500,000, but its real value is in its history and, more important, its rarity.” He added, “This is a once-in-a-lifetime opportunity to own such a massive and highly desirable meteor, especially at a time when space collectibles overall are so red hot right now.”While there is no denying the meteorite is more than four billion years old and originated in the asteroid belt between Mars and Jupiter, where and when it fell to Earth isn’t exactly clear. What is known is that the rock was previously owned by Dr. Harvey H. Nininger (1887-1986), a self-taught meteoriticist and educator who revived interest in the study of meteorites in the 1930s.Dr. Nininger assembled the largest personal collection of meteorites up to that time and founded the American Meteorite Museum in Arizona in 1942. He sold parts of his collection to the British Museum in 1958 and the Arizona State University Center for Meteorite Studies in 1960. The meteorite in the auction was sold to a private collector in 1985, who’s held it ever since.This is where the meteorite’s provenance becomes as mysterious as the universe itself. One theory states it is a Campo de Cielo meteorite, which refers to a group of iron meteorites and to the area in Argentina where they were found (this one in the 1930s). Another explanation says it made its way to Earth via the 1947 Sikhote-Alin shower in Siberia. It’s unknown who’s right.The fact is, further chemical analysis is probably required to determine which of these claims is true. What is impossible to dispute is the fact that the meteorite is an extraterrestrial sculptural form that was once part of the molten iron core of an asteroid that broke apart, a portion of which was deflected into an Earth-crossing orbit. The meteorite is 33 ½ inches tall and 16 inches wide.Meteorites are a constant source of fascination for the people who study them and for anyone who pounders our place in the universe. The Tellus Museum in Georgia has a meteorite on proud display but, for comparison’s sake, that one is only about 20 percent the size of the meteorite in the Gallery 63 sale. It will be interesting to see who outbids who – museum or private collector.While the meteorite is the auction’s clear headliner, there are other items to consider in the 343-lot catalog, mostly fine estate jewelry pieces and watches pulled from prominent estates and collections. All can be viewed online, or seen live and in-person at the Gallery 63 showroom in Atlanta, by appointment only. To schedule an appointment, call 404-600-3445, or, send an email to info@gallery63.net. All COVID 19 safety protocols will be observed and masks are required.A few of the expected top-selling dazzling jewelry items up for bid will include the following:- A Saturn jewels vintage style platinum diamond and sapphire engagement ring having a 1.67-carat center diamond flanked to each side with sapphires (est. $10,000-$15,000).- A fantastic platinum bar pin or brooch set with nine round brilliant cut diamonds (each approx. .45ct) and six sapphires (each about .50ct). (est. $10,000-$20,000).- A French Chanel Lucite wristlet in immaculate condition without a scratch with a black lambskin interior / exterior reminiscent of a Chanel perfume bottle (est. $3,000-$5,000).Watches will be plentiful and will also generate keen bidder interest. A few examples include:- A Patek Philippe Calatrava white gold men’s watch with skeleton back, white dial with date, automatic movement, 29 jewels, original black leather band (est. $24,000-$28,000).- An important 18kt white gold Chopard watch having the portrait of King Abdul-Aziz al Saud, founder of the kingdom of Saudi Arabia, with an inscription (est. 15,000-$20,000).- A men’s Rolex Datejust steel 18kt yellow gold men’s watch with two-tone Jubilee band and a stainless-steel fold over clasp, a very popular Rolex watch (est. $8,000-$16,000).To learn more about Gallery 63 and the Tuesday, April 6th Premier Spring Estate Auction, visit www.gallery63.net.Elijah or Paul Brown Gallery 63 2152 Faulkner Road Atlanta, GA 30324 404-600-3445 info@gallery63.net https://www.gallery63.netFounded over 25 years ago, Gallery 63 has successfully sold over half a million lots comprising some of the world’s greatest treasures. Graciously spaced in 6,000 square feet in Atlanta’s fashionable Buckhead district, Gallery 63 is able to provide its clients luxury purses, fine art, high end jewelry, and designer brands delivered right to their front door. Gallery 63 now offers in-house packing and shipping for small items such as jewelry, unframed art, small decorative accessories and other items. Alongside contactless pick-ups, Gallery 63 is dedicated to providing superior safe purchase of its fine goods on offer. Gallery 63 is located at 2152 Faulkner Road in Atlanta (zip: 30324). The firm is always accepting quality items for future sales. To inquire about consigning an item, an estate or a collection, call 404-600-3445 or email info@gallery63.net. To learn more about Gallery 63, visit www.gallery63.net.

You can edit or delete your press release Rare, Museum-Quality, 394-Pound Meteorite will Come Up for Bid in Gallery 63's Online-Only Auction on Tuesday, April 6th here

03-24-2007 | Arts & Culture
Gallery 63
Folder of 25 Previously Unknown Documents Pertaining To Dr. Martin Luther King, …
( EMAILWIRE.COM, March 23, 2007 ) Atlanta, Ga. - An unassuming Pendaflex file folder, still green but weathered with age and frayed around the edges, holds a treasure trove of about 25 previously unknown documents pertaining to slain civil rights leader Dr. Martin Luther King, Jr. The papers will be offered up as one lot in a sale slated for April 15 by Gallery 63, the consignment arm