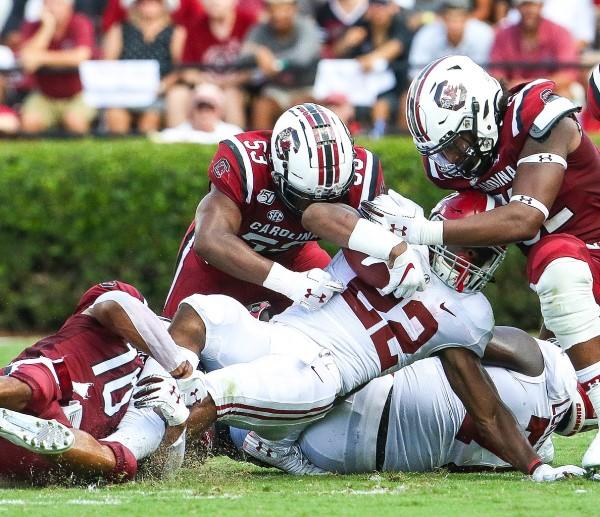 VKTRY GEAR today announced that a record number of NFL top prospects will be wearing their carbon fiber insoles as they go through their on campus Pro Days in the coming weeks. The NFL Combine has moved from Indianapolis to local workouts due to COVID 19 restrictions. Over 100 prospects from more than 60 schools will be wearing VKTRY Insoles in this critical stage of career preparation.“Many of our relationships with NFL stars began at the Combine where athletes experience +9.3% added explosiveness from their VKs,” said VKTRY CEO Steve Wasik. “Most athletes see significant improvements in the broad jump, the vertical jump and their time in the 40. They really feel the difference and understand how VKTRY Insoles can help them get an edge both at the Combine and on the playing field. Athletes also appreciate the improved injury protection with VKs, recently proven by one of the top athletic research facilities in the world, the Korey Stringer Institute at the University of Connecticut.”Amongst those athletes using VKTRY Insoles for their Pro days are projected first round picks: Alabama Running Back Najee Harris, Florida TE Kyle Pitts, Virginia Tech CB Caleb Farley, Miami DL Gregory Rosseau, Miami DE Jaelen Phillips, and LSU WR Terrace Marshall. Players from every Power Five Conference will be using VKTRY Gear for the first time during their Pro Days.Made from aerospace-grade carbon fiber, VKTRY Insoles store and return energy to the athlete. They also provide a “spring-like” effect to improve shock absorption and reduce the load and stress on the athlete’s body. In independent performance testing, athletes wearing VKs increased their broad jump by an average of +4.0”, their vert by +1.6” and improved their 40 times by 0.12 seconds.The large number of prospects continue unprecedented growth in football for the company. During the 2020 NFL season, a record number of over 200 NFL players, from 29 of 32 clubs, wore their carbon fiber insoles, a 300% increase from 2019 and included a list of some of the brightest young stars and respected veterans in the NFL, including Cleveland Browns RB Nick Chubb, LV Raiders RB Josh Jacobs, Washington RB Antonio Gibson, Buffalo Bills RB Devin Singletary, SF 49ers WR “Deebo” Samuel, Seattle Seahawks WR DK Metcalf, NY Jets DE Quinnen Williams, Buffalo Bills CB Josh Norman, Chicago Bears WR Anthony Miller, LA Chargers OT Brian Bulaga, Denver Broncos TE Noah Fant, New York Giants TE Evan Engram, Minnesota Vikings WR Justin Jefferson, Pittsburgh Steelers LB Devin Bush and many more. “I have worn VKs since I was a rookie and I love the added burst and explosiveness they give me on the field. I seriously feel 10X faster with VKs,” said Chubb, a two time All Pro selection and the Browns leading rusher each of the past two seasons, helping lead them to their first road playoff win since 1969, over the Pittsburgh Steelers in the AFC Wild Card game in January. “Most insoles are made from foam and plastic, but VKTRY is full length carbon fiber and that makes a difference – that gives me a competitive edge.”VKTRY Insoles are available in five different levels of flexibility to optimize performance, protection and comfort. Athletes at more than 300 professional and college teams wear VKTRY Insoles for training and competition. Some of those athletes include Fernando Tatis Jr of the San Diego Padres, Vlad Guerrero Jr. the Toronto Blue Jays, WNBA All-Star Angel McCoughtry of the Las Vegas Aces, Ryder Cup Captain Padraig Harrington and US Olympic Volleyball Team Captain Jordan Larson. VKTRY Insoles were originally invented for the US Olympic Bobsled Team to improve athletic explosiveness. In 2010, VKTRY helped Team USA win gold in the 4-man bobsled – first time in 62 years. Now, more and more people are discovering the benefits of energy return, improved stability and shock absorption that “VKs” provide.135 Research Dr Milford, CT 06460 joe Favorito/917 566 8345/ joefavorito2@gmail.comAbout VKTRY: VKTRY was created and founded by Matt Arciuolo, Certified Pedorthist for the USA Olympic Bobsled and Skeleton teams. The product design evolved following the Olympics and Arciuolo received a product patent in 2015. The Milford, Conn. based company began manufacturing and marketing the insoles in 2016. Because all athletes are not alike, VKs are customized based on the size of the athlete and the sport or activity. In 2020, the company launched the “VKTRY4HEROES” program in support and appreciation of our country’s dedicated health care professionals. The program has provided over 700 free VKTRY Insoles to health care workers and first responders as they tirelessly battle this pandemic. For more information go to www.VKTRYGEAR.com. VKTRY Insoles are proudly made in the USA.