IND vs ENG Today Match Prediction, Who Will Win 3rd T20I of England Tour of India 2021 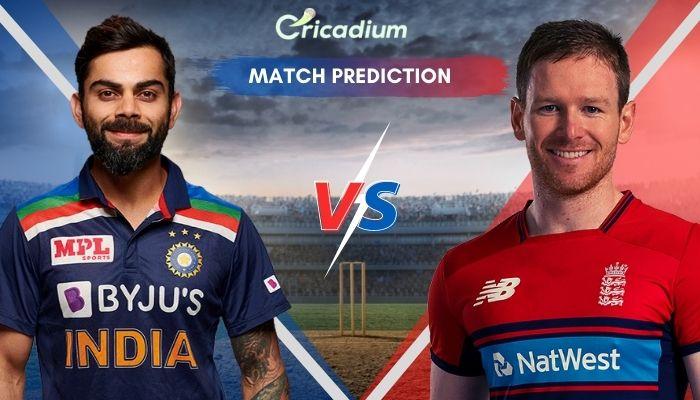 The 3rd T20I of the England Tour of India 2021 will see the clash between India and England at the Narendra Modi Stadium, Motera, Ahmedabad on Tuesday, 16 March 2021. Keep reading to find out the England Tour of India 2021 3nd T20I IND vs ENG Today Match Prediction.More info for Today Match Prediction: https://www.cricadium.com/category/today-match-prediction/As expected, the hosts bounced back after a loss in the first game. They seem to have developed a habit of losing the first matches of a series. But they manage to make a comeback to stay alive. This is exactly what has happened on this tour as well. First, in the Test series, England won the opening Test. But India went on to win the next 3 matches to claim the series. Then, the visitors defeated the Men in Blue in the first T20I. However, the hosts once again pulled up their socks and won the next game.On Sunday, Virat Kohli won the toss for a change. He elected to field first which was no surprise to anyone. To add to the fortune, Bhuvneshwar Kumar dismissed Jos Buttler for a duck in the first over. Jason Roy and Dawid Malan added 63 runs for the second wicket. But the innings couldn’t get the needed kick to push the scoring rate up. There were 4 scores in the 20s from the English middle order. But the Indian bowlers bowled beautifully at the death. They conceded just 35 runs in the last 5 overs to restrict the total to 164/6 from 20 overs.The Indian national cricket team had a poor start to the chase as Sam Curran began with a wicket-maiden, accounting for the scalp for KL Rahul. However, the joy was short-lived as the debutant Ishan Kishan went after the bowling in the powerplay. He was looking in hardly any pressure of his first international game and kept smacking every bowler out of the park. Virat Kohli played second fiddle to the left-hander who notched up a half-century on debut. When Ishan got out in the 10th over, India’s score had already reached 94. Kohli then took the matters into his own hands. The captain found support from Rishabh Pant and then Shreyas Iyer to take the team home in the 18th over.Here is our IND vs ENG 3rd T20I Match Prediction It’s even stevens in the series now. There isn’t much gap between the matches which doesn’t provide much time to think to both teams. However, for the spectators, the series is set up wonderfully well. Expect similar intensity from both teams in the contests to come. It would be interesting to see which team emerges with a lead on Tuesday. Know who will win today match prediction, India vs England 3rd T20I.Case 1: If India bats first First Innings score prediction: India will score 165-175. Result prediction: England will win the match by 6 wickets.Case 2: If England bats first First Innings score prediction: England will score 170-180. Result prediction: India will win the match by 5 wickets.India vs England Team NewsIndian Team News India brought in two debutants in the last game – Ishan Kishan and Suryakumar Yadav. It was a pretty good game overall for the hosts which means that there may not be any changes to the playing XI.Indian Team News: India brought in two debutants in the last game - Ishan Kishan and Suryakumar Yadav.England Team News The visitors had to replace Mark Wood with Tom Curran in the second T20I which was a forced change. If Wood is fit for the next game, he is a expected to be brought back in the XI. Apart from that, a spinner could be added to the XI considering the pitch for the next game.Visit@ https://www.cricadium.com/ind-vs-eng-today-match-prediction-who-will-win-3rd-t20i-of-england-tour-of-india-2021/Scheme No 74 Vijay NagarCricadium is a one-stop platform for all the ardent cricket fans around the world. It is run by the people who eat and sleep cricket. If you are also amazed by the beautiful game of cricket, Cricadium is the place for you.We wish to play a role in taking the game to new viewers and increase the fanbase across the world.

You can edit or delete your press release IND vs ENG Today Match Prediction, Who Will Win 3rd T20I of England Tour of India 2021 here