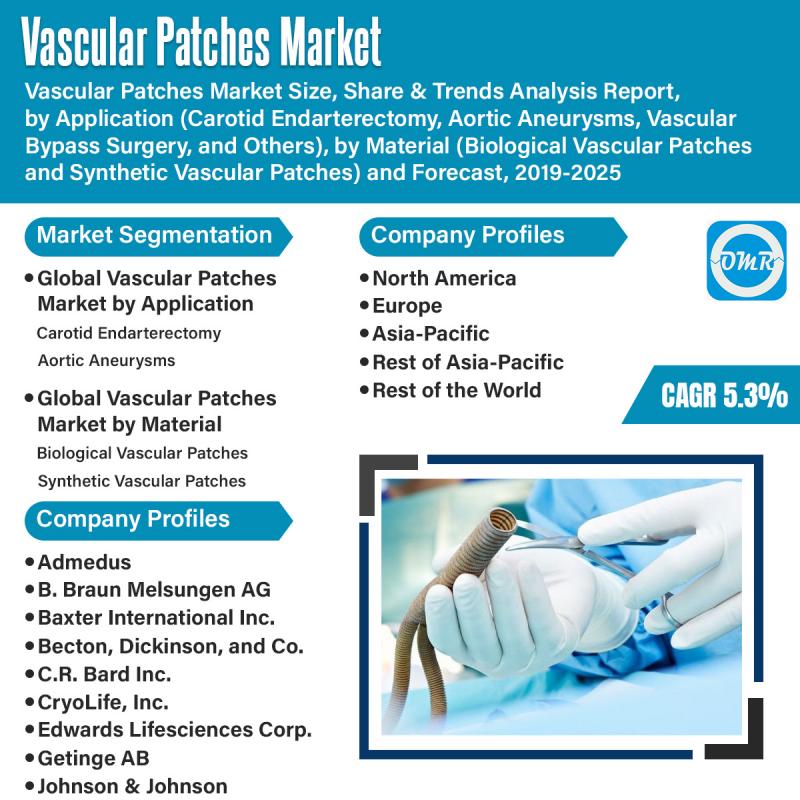 The growth of the global vascular patches market is growing owing to increasing geriatric population across the globe. People are living longer however they are not healthy as most of them are suffering from one or more diseases such as hypertension, diabetes and so on. Most of this population aging started in high-income countries such as Japan, France and so on. In Japan more than 30% of the population is above the age of 60 years, now population aging has started in low-income countries such as China, India, and Iran and so on. This aging population is being subject to various vascular diseases which are in turn assisting in the growth of vascular patches market.To Request a Sample of our Report on Data Center Colocation Market : https://www.omrglobal.com/request-sample/vascular-patches-market Vascular surgeries are a new inter-disciplinary subject of medical science in which diseases of the vascular system, or arteries, veins, and lymphatic circulation are cured by medical therapy. Additionally, minimally invasive catheter procedures and surgical reconstruction are used for managing the diseases. Most of the vascular surgeries are clean however there is still a high possibility of catching infections. The vascular surgeons are highly trained to treat almost every disease of vascular sy0stem except those of heart and brain. The diseases of heart vessels are cured by cardiothoracic surgeons. Most of the vascular surgery patients are usually old age and are generally affected by internal medicine diseases such as hypertension, diabetes and so on.(Get 15% Discount on Buying this Report) Browse for Full Report Description at : https://www.omrglobal.com/industry-reports/vascular-patches-market Factors Driving the global Vascular Patches Market • Increasing geriatric population • Better properties than traditional synthetic patches • Increasing cardiovascular diseases • Increasing demand for minimally invasive proceduresVascular patches are highly preferred to synthetic patches because vascular patches have several benefits and are very effectively utilized in minimally invasive vascular surgeries. Due to which vascular patches are being used in vascular surgeries across the globe. Moreover, adoption of biological patches is boosting, and they are being used in various vascular diseases such as carotid artery stenosis, peripheral artery disease and so on which is additionally propelling the market. Advancement in healthcare is another factor fueling the growth of vascular patches market as more and more vascular surgeries are being developed the need for vascular patches is increasing. Cardiac diseases are increasing across the globe and these are the leading cause of death in high-income countries which is expected to grow due to which they need for vascular patches is increasing. Moreover, various benefits of vascular patches over synthetic patches such as lower infection rate, easy to use, higher biocompatibility and so on are assisting in the escalating demand of vascular patches in the market.Global Vascular Patches Market-Segmentation By Application • Carotid Endarterectomy • Aortic Aneurysms • Vascular Bypass Surgery • Others By Material • Biological Vascular Patches • Synthetic Vascular PatchesGlobal Vascular Patches Market -Region North America • US • Canada Europe • UK • Germany • Italy • Spain • France • Rest of Europe Asia-Pacific • China • India • Japan • Rest of Asia-Pacific Rest of the World • Latin America • Middle East and AfricaReasons to Buying From us – 1. We cover more than 15 major industries, further segmented into more than 90 sectors. 2. More than 120 countries are for analysis. 3. Over 100+ paid data sources mined for investigation. 4. Our expert research analysts answer all your questions before and after purchasing your report.For More Customized Data, Request for Report Customization @ https://www.omrglobal.com/report-customization/vascular-patches-marketMedia Contact: Contact Person: Mr. Anurag Tiwari Email: anurag@omrglobal.com Contact no: +91 780-304-0404 Company Name: Orion Market ResearchAbout Orion Market Research Orion Market Research (OMR) is a market research and consulting company known for its crisp and concise reports. The company is equipped with an experienced team of analysts and consultants. OMR offers quality syndicated research reports, customized research reports, consulting and other research-based services.