Governor Pritzker: Please Pardon Luna, the Coyote, and Allow Her to Return Home 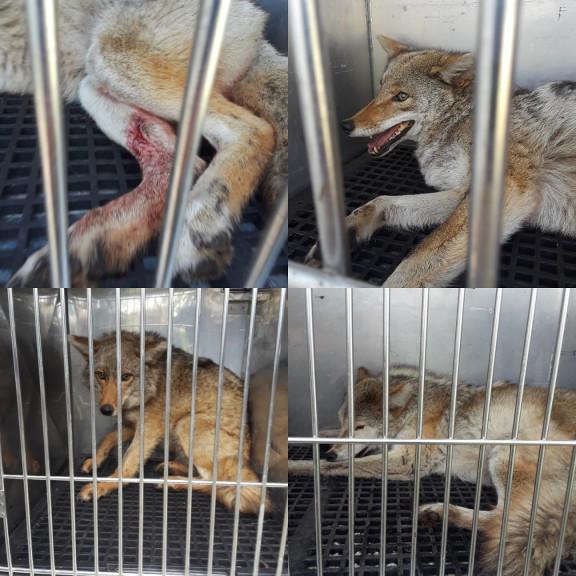 After a Year Full of Misery, Governor Pritzker Could Start 2021 by Making the Land of Lincoln a Bit More Humane and a Little Less Corrupt.

Tinley Park, IL - USA | February 23, 2021 -- As a new year begins, Tinley Park resident Tomi Tranchita continues to grieve for Luna the Coyote, the lone survivor of an illegal and brutal seizure by the Illinois Department of Natural Resources (IDNR) in April 2019. Luna’s three pack mates died as a result and elderly Luna is languishing at a facility in Indiana while Tranchita continues to battle IDNR in the courts.

IDNR Conservation Sergeant Joshua Mooi, who had moved near Tranchita, orchestrated the raid that initiated the isolation of Luna and separation from Tranchita. IDNR’S explanation is because she had inadvertently forgotten to renew a $25 state permit, yet her facility has been federally licensed the entire 13 years of its operation.

“Mooi knew that none of my coyotes posed an imminent danger to anyone. He interviewed our neighbors, learned they had no complaints whatsoever about the coyotes and examined state and federal licensing and permitting records. Yet, he arrived at my home at the crack of dawn with a rifle slung over his shoulder,” Tomi Tranchita, who called her Wildlife Educational Program and Refuge, Happy Coyotes: Truths about Peaceful Coexistence.

Tranchita videotaped the seizure of her coyotes, who had never experienced inhumane treatment, but rather greeted visitors with wagging tails. According to her, “I offered to get any state permits needed. I begged to crate the animals, as they were crate trained as part of her USDA emergency plan, but Mooi insisted on having the coyotes chased, cornered, and shot with tranquilizer darts — but refused to wait for the tranquilizer to take effect —supposedly he was in a hurry to leave on vacation that afternoon. So, they then used cruel chokeholds.”

For reasons that bewilder and dismay Tranchita and some 50,000 petition signers, the Illinois agency prevails in insisting she have a fur-bearing mammal breeder permit, and since last spring, a hound running area permit. The hound running area permit, not required by the IDNR of any other wildlife facility with coyotes, is the issue currently before the federal court for the Northern District of Illinois.

Luna, whom Tranchita rescued as an orphaned pup, still lives, but spends her days in constant fear of everything, relieved only by rare visits from Tranchita, her only bonded human. “We are pleading with the Governor and others with political power to remedy this tragedy that should have never occurred, especially over a little red tape. By pardoning Luna, Pritzker could help improve Illinois’ politically corrupt reputation,” Chicago Alliance for Animals Executive Director, Jodie Wiederkehr.

You can edit or delete your press release Governor Pritzker: Please Pardon Luna, the Coyote, and Allow Her to Return Home here

News-ID: 2247555 • Views: 621
Comments about openPR
OpenPR ist the nicest and most clearly laid out PR platform I have seen to this day. The press releases are displayed very nicely and clearly and without any unnecessary frills. The updates are fast and the finished release looks appealing and is clearly legible. Even with 16 years of experience one discovers new things from time to time. Congratulations!
Gabriele Ketterl, Director Marketing & PR, Menads