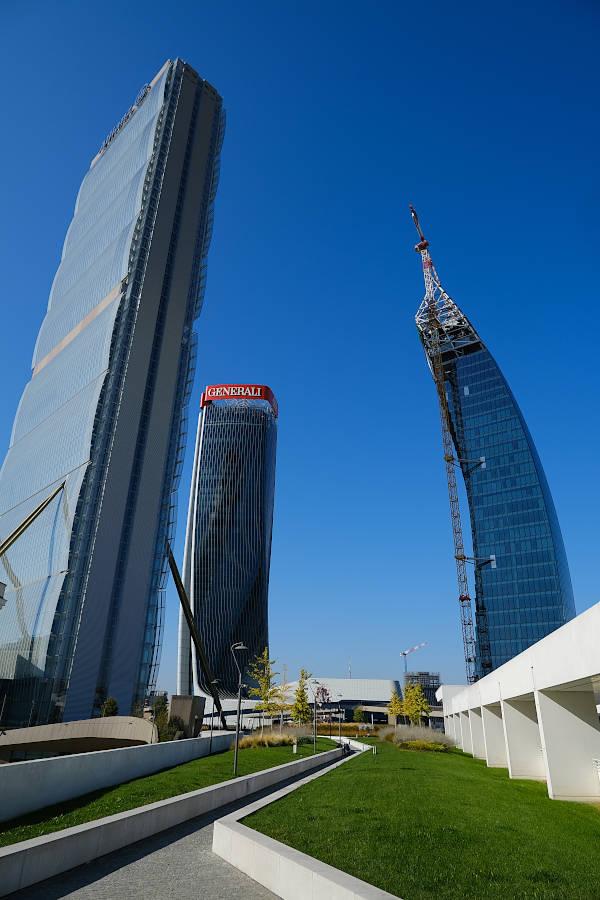 The spaces formerly occupied by the Milan Fair are now transformed into a modern district where three ultra-modern skyscrapers stand out. On the MyVideoimage.com portal the images of the new architectures.The area where today the new "CityLife Milano" district stands was occupied since 1906 by the pavilions of the old Milan Fair established starting from the Universal Exposition of 1906.In 2005, the exhibition spaces of the Fair were transferred from the original area adjacent to the city center to the new pavilions in Rho-Pero. In 2007, works began for the transformation of the old area on the basis of the international competition launched by the Fiera di Milano Foundation, which was won by the CityLife company, which belongs to a pool of insurance companies controlled by Generali.The area of ​​the new project called "CityLife" is included in a square delimited between Piazzale Giulio Cesare, Viale Berengario, Viale Cassiodoro and Viale Duilio. The project, drawn up by three important international architects, is structured around a large central square overlooked by three glass-clad towers and a shopping center. Two blocks of residential buildings and a public park were built in the part towards Piazzale Giulio Cesare.The three towers, which take their name from their designers, Hadid, Isozaki, Libeskind, are the respective headquarters of Assicurazioni Generali, Allianz Assicurazioni and the company PwC.Hadid TowerThe skyscraper and the shopping center below are the result of a design by the London-based Zaha Hadid Architects. The founder of the studio, the recently deceased architect Zaha Hadid, of Iraqi origin, graduated in mathematics in Beirut and in architecture in London.The skyscraper, nicknamed "The crooked" for its conformation where the vertical elements appear to be subjected to a torsion applied to the top, has a height of 177 meters.The reinforced concrete structure is clad with a curtain wall type “Curtains wall”. A curiosity concerns the production of the facade windows designed on the digital model and produced entirely in China. The plan of the tower is composed of two coupled curved elements where the spaces dedicated to the work environments are placed around the perimeter while the vertical connections (stairs, lifts and shafts) and services occupy the central area.Isozaki TowerDesigned by the Japanese architect Arata Isozaki and the Italian Andrea Maffei, who has been collaborating with the studio for years, which has offices in Japan, China, Spain and Italy.The building has a height of 209 meters and is made entirely of a reinforced concrete structure with the two main facades covered with eight curved glass sails. The solar shading of the facades is entrusted to a set of metal slat curtains placed on the internal side of the windows.The plan of the various floors is rectangular with vertical connecting elements such as stairs, elevators, shafts for the passage of the systems, placed on the ends of the shorter sides. The service block is located in the central core. The central part of the tops is conceived as a single large flexible space, suitable for hosting any type of function.Characteristic of this skyscraper are the four metal tie rods placed externally to the facades of the building to contain the movement under the effect of the wind. With this expedient, the movement to the top floor was limited to only 20 cm instead of the expected 80 without the positioning of the tie rods.Libeskind TowerThe skyscraper was nicknamed by the Milanese "The Curved" because two facades are curved towards the south. The project is by the New York studio of the Polish-born architect Daniel Libeskind.The shape of the tower recalls the segment of a dome like that of Santa Maria del Fiore in Florence, as if to symbolize a segment of the Renaissance. The convex part, with a larger surface, is suitable for capturing solar radiation, is oriented to the north, while the concave part, with a lower surface, is inclined to the south in order to offer less surface exposed to the sun.The main structure of the tower is made of reinforced concrete, while the terminal part, called "Crown" is made of steel. The total height of the skyscraper is 175 meters.The vertical distribution elements and the services are placed in a reinforced concrete prism around which the office spaces are developed.In the original version, the project envisaged the prism of the services partially protruding in the upper part from the glass envelope of the main volume. In the executive phase, for reasons of cost containment, the project is "straightened" with the elimination of the external volume and the reduction of the vertical curvature.Photos and videos of the new neighborhood The myvideoimage.com portal created to document Italian cities, villages and landscapes, collects images, photos and videos of the new CityLife Milano district. Here we find the Libeskind tower under construction with the photos and videos of the "Crown" being assembled, the images and videos of the residences designed by Zaha Hadid, of the square with the shopping center below the Generali tower, of people having fun in the green of the park. The photos and videos of the collection can be used, as well as to view the new architectures, for use in publishing, television and to illustrate websites.Paolo GrassiLocalità Falconara 4 19032 Lerici SP ItalyMyVideoimage.com is a portal specialized in images, photos and videos of cities and the Italian environment.

You can edit or delete your press release Citylife Milan. International architecture. here

01-12-2021 | Advertising, Media Consulting, …
MyVideoimage.com
The new bank for Italian videos and images.
MyVideoimage.com is a new all-Italian platform for buying and downloading photos and footage for publishing, graphics and advertising. In recent years, portals have spread on the web where you can directly purchase and download images and films with royalty free licenses. MyVideoimage.com is the first Italian website where you can find a selection of photos and videos with Italian subjects to use for creative projects. The collection currently includes thousands of high definition

04-10-2019 | Business, Economy, Finances, B …
No
EMA at IoThings 2019, Milan
The 2019 Spring edition of IoThings in Milan hosted a multitude of companies. Numerous participants from all over Europe engaged in conferences, business meetings and expos like ITALI5G, AI + BOTS World and Blockchain Now to offer a unique advantage through the most disruptive technologies of today. Staged at Booth#38, EMA sported a gamified implementation of IoT for our audience to interact with. Our demonstration aimed to display our engineering prowess
10-13-2016 | Business, Economy, Finances, B …
Climaveneta
The luxury refurbishment: Monte16 in Milan
The refurbishment of the building located at 16, Monte Grappa Boulevard in Milan is a further step in the radical change taking place in recent years in Milan city center. The work began with the demolition of the original building, built in 1882, and continued with the construction of the new building in compliance with the existing urban constraints. Furthermore, the project makes great use of structural and mechanical system
07-09-2014 | IT, New Media & Software
DataVard
DataVard goes Italian: Milan office opens
Heidelberg (Germany), July 8, 2014 – The software and consulting company DataVard continues successful expansion by opening its seventh branch in Milan. Head of DataVard Italy is Michele Pinton who was previously responsible for major System Landscape Optimization (SLO) projects with SAP AG in Italy. “With this expansion into Italy, we’ve implemented a further step of our international strategy,” explains DataVard Managing Partner Gregor Stoeckler. “Our goal is to support our
05-29-2012 | Business, Economy, Finances, B …
European School of Economics
ESE Milan Campus
Master Your-Self! ESE – A Strong Philosophy "Ho sognato una scuola che crede che la felicità sia economia… Che solo un uomo capace di sognare può creare ricchezza… Una scuola dove una nuova generazione di leader possa apprendere che l’economia è l’arte di sognare. Anche scuole ed Università ordinarie insegnano a sognare. La prima lezione in assoluto di ogni insegnamento di economia in tutto il mondo comincia con un concetto lapidario: “Le
03-16-2011 | Science & Education
European School of Economics
Personal Shopper Course in Milan
It’s a great excitement to launch our new edition of Style Therapist and Personal Shopper course at ESE Milan! The course will start on April 18th, 2011, at the European School of Economics, Milan Campus and the module requires 3 in-class hours per week, for a total of 36 hours. Most people think that the idea of a Image Consultant or Personal Shopper is laughable, let along conducting a course on how
04-29-2010 | Science & Education
WEB MARKETING TEAM
Studying Fashion in Milan and Paris
The fashion schools NABA (Nuova Accademia di Belle Arti Milano) and Parsons Paris are proud to present the original Course “From Haute Couture to Pret-à-Porter: a European Fashion Design journey from Paris to Milan” - design-summer-courses.com/ from-haute-couture-to-pret-a-porter-intermediate.html. This course is an intensive on-site exploration of the fashion background present in the European capitals of fashion and glamour: Paris and Milan. That is why the course is structured in two different sessions
Comments about openPR
We publish our press releases on openPR.de because we like people who are "open" - just like us.
Frank Obels, CEO, INCONET - Informationssysteme, Communication und Netzwerkberatung GmbH