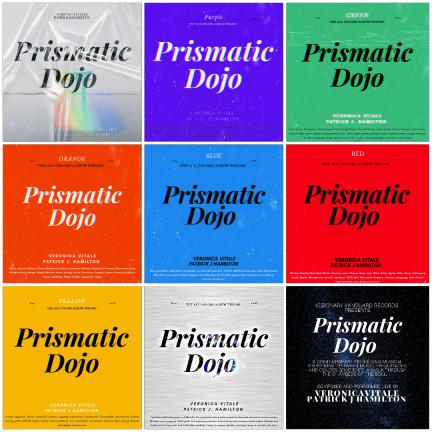 Los Angeles, CA - USA | February 10, 2021 -- 100 songs composed in less than 7 days. It’s the latest music experiment by Artists and Producers Veronica Vitale and Patrick Hamilton. Prismatic dojo “The All Colors theory” is a contemporary experiment between color gradients and music frequencies brought together to heal the mind and soul. Every volume collects the tales of different shades of color. Every piece of music was composed in a room filled with color changing screens and LED lights to provide a variety of colors to change the vibe of the room completely. The word “Dojo” literally means "Place of the Way" in Japanese. It’s a hall or a place for immersive learning and meditation. Available on Spotify: https://sptfy.com/prismaticdojoPrismatic Dojo is an original spontaneously performed musical masterpiece, recorded live without any pre-existing score or prior rehearsal. It's a journey and a work of art that starts right at the door of the Soul’s Chambers and fits perfectly in the field of positive psychology. Artist Veronica Vitale and Patrick Hamilton head straight for “the zone” an area that people only enter when their passion sets them into a euphoric trance. In this place you experience the flow state where an artist talent is fully immersed in a feeling of energized focus. The artist is fully involved, and immersed in the essence of the “flow”; characterized by the complete absorption in what one does, and often resulting in the transformation of one's sense of time - while truly enjoying in the process of the activity. Prismatic Dojo is familiar to the Chromesthesia Concept but different in understanding how rather than a color influence on an already existing sound how this color itself influences the production of a complete new music of music. Simply put, rather than sensory influence, how does it effect sensory creation.“To understand anything non-physical, one needs a certain level of creativity and imagination. Frequencies are hard to see but easy to feel” – says Artist Veronica Vitale.“ One way to understand the Universe is in terms of energy and frequency. We wanted to explore how a specific color in the room would influence not only the performer but also the human psyche. Can the resulting sound influence the feeling of color even when it is absent to the listener ” – says Artist Patrick J HamiltonItalian Recording Artist and Producer Veronica Vitale together with American Musician and Film Director Patrick J Hamilton are both advocates of the theory of quantum consciousness and the idea that various systems (e.g. physical, biological, social) should be viewed as wholes, not merely as a collection of parts.“While recording, We were walking through some sort of dream, an alternative reality, Music of an almost other-worldly beauty brought us in this spiritual world made of fantasy, dreams, where everything is possible” – says Veronica VitalePrismatic Dojo is recorded as a whole concept but divided in 2 minutes track and presented to you like a passage, chapters. From night to dawn, form red to blue, from Celtic ancient ages and old legends to whales floating in deep oceans. From tales of star-crossed lovers and exile, to soldiers singing Gregorian chants and hymns like Hail Holy Queen ( “Salve Regina” )Some of the Healing Frequencies In this Music Work:• 174 Hz relieves pain and stress.• 285 Hz heals tissues and organs.• 396 Hz liberates you from fear and guilt.• 417 Hz facilitates change.• 528 Hz for transformation and DNA repair.• 639 Hz reconnects you with your relationships.PRISMATIC DOJO IS NOW AVAILABLE:• Purple Volume 1• Green Volume 2• Orange Volume 3• Blue Volume 4• Red Volume 5• Yellow Volume 6• Platinum Volume 7Follow Prismatic Dojo Here: https://www.instagram.com/prismaticdojoPress & Media Contact: Visionary Vanguard Records Vineland Avenue, North Hollywood, CA 91601 +1 (404) 519-7213 http://www.veronicavitale.nethttp://www.veronicavitale.net

You can edit or delete your press release 100 Songs in 7 Days; Veronica Vitale and Patrick Hamilton Create a New Music Color Science here

09-18-2020 | Leisure, Entertainment, Miscel …
Face Everything and Rise
Face Everything and Rise - New Album by Ariel Cervantes Unites 24 Artists From 1 …
“Face Everything and Rise” movement created by the Mexican producer Ariel Cervantes presents new “EP” album with 24 artists from 12 different countries to stand up against the COVID-19 impact. New York, NY - USA | September 15, 2020 -- Face Everything and Rise is an international non-profit collective created in March, 2020 by the Mexican musician, composer and producer Ariel Cervantes, while getting stranded in New York City due to
04-01-2019 | Arts & Culture
PR for Minnow
“Minnow”* by Veronica Arthur is published
ISBN #978-1786233257 “Minnow”* by Veronica Arthur is published This is a heart-warming dog tale with lovely illustrations *a percentage of proceeds from sales of this book go to Countryside Alliance* About the Book: A puppy, Minnow, remembers his life born in a tenement in a high-rise block of flats. He is befriended by an old lame dog, Rufus, a wise campaigner who introduces his young companion to city life and daring escapades for morsels and
04-19-2016 | Advertising, Media Consulting, …
Majesty Girls
Transgender Advocate, Producer and Filmmaker Veronica Robinson features “Majes …
The challenges transgender women face are very real ones, and often something not well understood by the majority of people. Fortunately, important progress is being made in this area by breakthrough artists, like transgender advocate, filmmaker and producer Veronica Robinson. Recently, Robinson won best film at the Miami Short and Documentary Film Festival for “Majesty Girls” shedding light on the transgender woman experience. With her work rising
04-12-2016 | Leisure, Entertainment, Miscel …
The Beehive
Mi Casa Bee Casa
WHAT: On Thursday, May 5th, 2016, The Beehive located in Boston’s South End is going south of the border in celebration of Cinco de Mayo with its annual event featuring live music and amazing food & cocktail specials! Guests will be able to indulge in Mexican-inspired food specials from Chef Gregory Torrech while getting in the spirit with tequila
06-11-2010 | Arts & Culture
The gallery STEINER - art & wine
Art From Ecuador: The exhibition of Veronica Ibsel Dominguez at Vienna
In the month of June The gallery STEINER - art & wine presents for the first time in it’s history Art from Ecuador. Veronica Ibsel Dominguez, native from Guayaquil, a harbour city (in the Western part of the republic) and the largest city (in terms of population) of Ecuador is showing an extensive exhibition at Corinna Steiner’s gallery. The artist lives and works in Bad Vilbel, near the German metropolis
06-19-2009 | Advertising, Media Consulting, …
VBP OutSouring
Veronica Eyenga, Discusses Current Economic Climate in the 2009 Minority Busines …
Glen Burnie, MD (June 17 2009) – Interviewed and featured in the 2009 Minority Business edition of the Baltimore Business Journal, President and CEO Veronica Eyenga, discusses how she has kept her business, VBP OutSourcing, afloat in the current economic climate. As the current state of the economy has affected the majority of minority business, Eyenga has turned to new avenues for growth and expansion. One aspect has
Comments about openPR
Your portal is fast, simple, and easy to use. Others may have more functions but they also demand more editing time, you have to preformat the text in order to achieve a good result etc. I think openPR is really fantastic!
Andreas Knepper, wallmedien AG