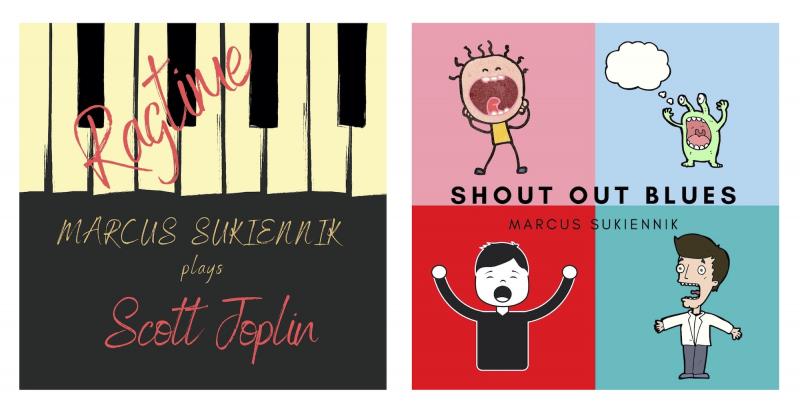 Back to the roots of jazz: Pianist Marcus Sukiennik returns with a double release in February, performing rags by Scott Joplin and his new composition Shout Out Blues.He is considered the "King of Ragtime" – the African-American composer Scott Joplin. Marcus Sukiennik recorded four of his most famous compositions for his EP Ragtime - Marcus Sukiennik plays Scott Joplin: The Entertainer, Maple Leaf Rag, The Easy Winners and The Great Crush Collision March.As popular music for dancing, ragtime celebrated its peak at the turn of the 20th century and experienced a notable revival in the 1970s, particularly thanks to the successful box-office hit The Sting, whose soundtrack thrives on Joplin's compositions. They are refined earworms, captivating listeners with their catchiness whitout compromising on originality. Temporal shifts between melody and accompaniment are among the striking characteristics of ragtime piano – as well as large leaps in the left hand. Sukiennik plays the lively tunes at a moderate tempo, just as their creator used to, for whom it was clear that "it's never right to play ragtime fast". This tempo is greatly increased in Sukiennik's new original composition: Shout out Blues is a modern, fast blues, whose extraordinary intro harmonically swings over into the traditional minor form of the modern jazz precursor.The EP Ragtime - Marcus Sukiennik plays Scott Joplin will be released on 05.02.21, the single track Shout Out Blues follows on February 19. Listen to both releases in High Definition Audio on all common streaming platforms.Marcus Sukiennik Langemaß 20 51063 Koeln GermanyTrained in classical and jazz music, pianist Marcus Sukiennik composes mainly for piano solo and writes arrangements of classical melodies in Cologne. As a bar pianist, he has also been playing contemporary background music for more than 25 years at a wide variety of venues, including his position as artistic director of the Piano Bar of the Excelsior Hotel Ernst in Cologne.

02-12-2018 | Associations & Organizations
Rotary Club of Nottingham
23rd February is Purple Pinkie Day
Rotary’s pledge for a polio free world was made in 1985 when there were 125 polio endemic countries and hundreds of new cases every single day. Thanks to Rotary, and the support of our partners WHO, Unicef, CDC and the Bill and Melinda Gates Foundation, there are now just three countries still classed as endemic: Pakistan, Nigeria and Afghanistan. To finish the job over 2 billion doses of oral polio
09-15-2017 | Leisure, Entertainment, Miscel …
LINKIN Reps Pvt Ltd
The Residence Bintan opens February 2018
September, 2018: Having established hugely successful properties in the Indian Ocean and North Africa, 2018, will see the Cenizaro group make their first foray into Indonesia with an exciting new opening in Bintan. Located on the east coast of Bintan Island, a short boat-ride from Singapore, The Residence Bintan will open in Winter 2018 amongst lush tropical greenery and breath-taking views of the South China Sea. The hotel will be
12-01-2010 | Business, Economy, Finances, B …
Women Entrepreneurs Boot Camp
Women Entrepreneurs Boot Camp – February 12, 2011
NO THEORY, PHILOSOPHY OR FLUFF! PHOENIX –November 29th, 2010 – Where can a women business owner find powerful, world-class insights and cutting edge strategies? At the seventh annual Women Entrepreneurs’ Small Business Boot Camp, where else? “The full day conference includes two keynote presentations, nine workshops and 50 exhibitors, all providing practical tips and ammunition to fire-up your business,” describes Susan Ratliff, the founder of the state-wide event and
02-25-2009 | Business, Economy, Finances, B …
BBB of Eastern North Carolina
BBB Consumer Alerts for February 2009
BBB Warns of Garner-based Web Retailer Online Weight-Loss Company Highlighted in February Consumer Alerts RALEIGH, N.C. (February 19, 2009) - The Better Business Bureau (BBB) of Eastern North Carolina (www.bbb.org) warns consumers to be cautious when dealing with companies offering free trials, especially when a credit or debit card is used to cover shipping and handling costs. Complaints are being filed regarding the deceptive practices of an online company with a post
02-04-2008 | IT, New Media & Software
Secura GmbH
Landrush of asia-domains begins February 20
The Sunrise Period of asia-domains has closed at 2008 January 31. Individual companies and the general public will soon be eligible to register for available asia-domains when the Landrush phase kicks off on February 20, 2008. Landrush concludes on March 12, with Go Live scheduled for March 26, 2008. During the Landrush phase anyone around the world can apply for any available asia-domains, representing a golden opportunity for individuals looking to
02-26-2007 | Logistics & Transport
Analytiqa
Analytiqa: Logistics Bulletin: Friday 23rd February
This week\'s Logistics Bulletin takes global expansion as its theme. In the last week, Schneider National has received the go-ahead for operations in China, Thiel Logistik is expanding its presence in South America, DPWN has announced multi million dollar investments in the Middle East and major logistics hubs are to be established in Russia. Elsewhere, computer manufacturer Dell has established a new Global operations organisation, whilst retailer Decathlon is expanding
Comments about openPR
I can't but agree to the positive statements about your portal: easy to use, clear layout, very good search function, and quick editing!
Jens O'Brien, Borgmeier Media Communication