Press release from: The Cinema Blogs 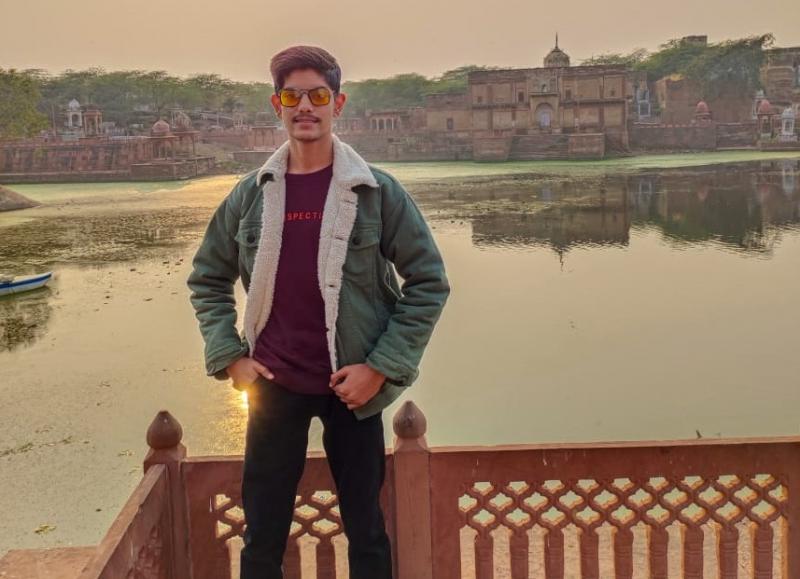 Ronit Raj, a budding blogger, and artist who has been living in Jaipur for the past two years have been making his acting debut next month with the short film The Last Confessions, released on the OTT platform in March.Nischal Sharma and director Yaman Bhatia associated with this short film said that it is a story based on a crime thriller. Its shooting has been completed in the Pink city Jaipur. The producers of this short film are Nishchal Sharma, Director Yaman Bhatia, Assistant Director Bhumika Dulani, and DOP Ayush Kaushik and Ayush Mangal. In the lead artist, Raj, Surabhi, Shashwat, and Nehal will be seen showcasing their acting skills.Ronit Raj said that he will be seen doing acting as a supporting artist in this short film. He further explained that this is my first project as an artist. There was a lot of learning to be done during the shoot and a chance to learn new nuances. Ronit considers actor Ranveer Singh as his idol. Ronit also likes to participate in sports activities.Significantly, Ronit Raj has a reputation as one of the youngest cinema bloggers. Ronit is the founder of an entertainment website called The Cinema Blogs. Through which he spreads the updates of the film and fashion world to the people.The Cinema Blogs Vaishali Nagar, Jaipur Lalarpura roadIt is a constantly updated platform for Cinema fans to explore and discuss movies, TV shows, and the best streaming has to offer. We cover and provide whatever fans are into in a voice they recognize because we’re fans too. At The Cinema Blogs, you can get content about Latest Trends going on in Bollywood & Hollywood. Here you also find Movies, Reviews Of Movies, Shows, Web series of Netflix & Amazon Prime, Upcoming Movies details, etc

More Releases from The Cinema Blogs

12-03-2020 | Media & Telecommunications
The Cinema Blogs
Ronit Raj is one of the first and youngest blogger in the cinema category
18-year-old Ronit Raj, who belongs from the smallest district of Rajasthan namely Dholpur, and currently lives in Jaipur, is the first and young blogger in the cinema category. Ronit is currently studying in the 11th standard and is a commerce student. For the last 10 months, Ronit writes blogs on film, celebrity, and related issues and gives his feedback. Ronit maintains his own blog page in the name of The

12-03-2020 | Media & Telecommunications
The Cinema Blogs
Ronit Raj is one of the first and youngest blogger in the cinema category
18-year-old Ronit Raj, who belongs from the smallest district of Rajasthan namely Dholpur, and currently lives in Jaipur, is the first and young blogger in the cinema category. Ronit is currently studying in the 11th standard and is a commerce student. For the last 10 months, Ronit writes blogs on film, celebrity, and related issues and gives his feedback. Ronit maintains his own blog page in the name of The
11-18-2011 | Health & Medicine
leapdoctor,com
Local Company to Speak in Chicago about Physician Jobs, Social Media
OKEMOS, MICH. — Leapdoctor.com, a physician job search engine run out of Okemos, Michigan, is going to be represented in Chicago, Illinois this Friday at the Illinois Staff Physician Recruiter Members Only Retreat. The company will be represented by President & CEO, Ronit Tyagi, along with Founder, Ashok Tyagi. They will be sponsoring lunch for the retreat and will also be hosting a short presentation for the members, in which
03-24-2011 | Media & Telecommunications
Sites and Photos
Giant Israeli Corporation H.Y. Group Acquires 50-Percent Ownership of Sites & Ph …
Sites & Photos, the world's largest photo and video supplier devoted only to Archaeology, Architecture and Ancient Art, announced today that H.Y. Group, one of Israel's leading corporations, has acquired 50-percent ownership in the company. Sites & Photos is now equally owned by H.Y. Electronics, a company in H.Y. Group, and by Samuel Magal, the company's founder. Sites & Photos was established in 2005 by Samuel Magal, a certified archaeologist and
04-14-2008 | Media & Telecommunications
Moshe zingel Law Office
Israeli Artists Planning To Move Copyright Management from ACUM to SACEM Luxembo …
(Tel Aviv, April 14, 2008) Perhaps a new era in European mobility among copyright societies is starting in Tel Aviv. A group of Israeli artists who are highly dissatisfied with the way their copyrights management is being administered by ACUM, the Israeli copyright society for authors and composers, have hired attorney Moshe Zingel to collectively negotiate terms of admission to the Luxembourg counterpart society. But first
01-03-2008 | Advertising, Media Consulting, …
European Sensory Network
New Members from Europe and the Middle East: The European Sensory Network welcom …
January, 2008: The European Sensory Network (ESN), an international association of experts in the fields of sensory and consumer research, has accepted two new members into its ranks. The firms of ROGIL (situated in Heverlee, Belgium) and ANALYST (from Hamam St. Rehovot, Israel) have passed the admission requirements with flying colours: their sensory and consumer research methods and methodology was shown to be of the highest quality. The two companies presented
Comments about openPR
We publish our press releases on openPR.de because we like people who are "open" - just like us.
Frank Obels, CEO, INCONET - Informationssysteme, Communication und Netzwerkberatung GmbH