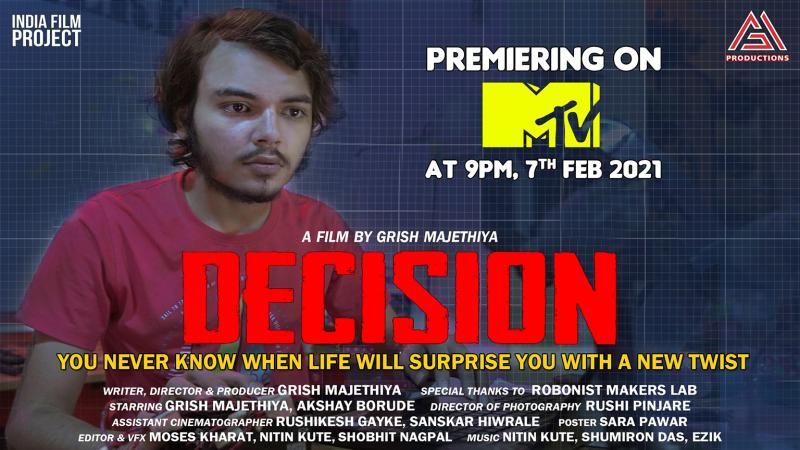 The short film 'Decision' is selected in the top 100 films among 38,000 filmmakers from 332 cities and 19 countries! It will be telecasted on MTV India at 9 pm IST on 7th Feb 2021. This short film was made in only 50 hours, right from the story-script, shooting, editing, music everything in only 50 hours for a film festival called 50 Hours Filmmaking Challenge Season X by India Film Project on 27th & 28th September 2020 during the Lockdown.The film is about a college student Ashutosh who is working on a new scientific invention that can Change The Entire World. His mentor Akash always guides & motivates him whenever he is stuck somewhere. Finally, after 3 years of hard work and dedication, Ashutosh succeeds in his invention but nature wants to test him one last time! Will he take the right DECISION? Filmmaker Grish Majethiya said that the first challenge that came was of team members, I was alone and had zero budget for this film as I'm still a school going, kid. I tried a lot to find people interested to work together, few were not in the same location, few were busy with other work, but finally, the team was ready! And the team gave their best in such a short time! I would thank each & every team member as it won't be possible with everyone's efforts! Those 50 hours have become an unforgettable memory, those sleepless nights & empty stomach!The Decision is a Hindi language film and relates to a genre of Drama, Thriller, Social Message, Experimental The Director, Producer & Writer of this film is Grish Majethiya. This film Starring actor Grish Majethiya as Ashutosh Thakkar, Akshay Borude as Akash. The Director Of Photography is Rushi Pinjare. Assistant cinematographers are Rushikesh Gayke and Sanskar Hiwrale. Editor & VFX by Moses Kharat, Shobhit Nagpal, and Nitin Vishnu Kute. Music by Nitin Vishnu Kute, Shumiron Das, and Ezik. The Production Company is GM Productions.GM Production's 'Decision' has won several awards including Top 100 in IFP's 50 hours Filmmaking Challenge, Selected for telecast on MTV, Official Selection in ACCSF 2020, Official Selection in First Time Filmmaker 2020, Miniflix Official Selection.About Filmmaker: Grish Majethiya is a Young Filmmaker & an Actor from Aurangabad, Maharashtra. He is only 16 and studying in class 11th. The short film "Decision" is his debut film as a Director but he has worked on many projects as an actor, which includes TV show 'EPIC IQ', International Series 'Legendary Locations' and many more. He is also the Acting Winner of the TV Reality Show 'No. 1 Dramebaaz Season 3'. Grish said that throughout the journey of an actor, the interest in Making Film grew up in his mind. The first time when this thought came into his mind was in class 10th when he was reading a story in his English TextBook, he thought what if there was a short film on the story of the chapter.Grish Majethiya 35, Shinde Orchid, Gadiya Vihar Road, Shahanoor wadi, Aurangabad, Maharashtra, India - 431005Ph. No. +918999681173 Email ID: productions@grishmajethiya.comGM Productions is a Film Production Company based in India found by Grish Majethiya. We make short films, music videos, web series, and many more.

09-15-2021 | Arts & Culture
GM Productions
Short Film 'Decision' Directed by Grish Majethiya Now Streaming On MX Player
'Decision' is a Hindi language drama short film. It gives an important message to the youth about mental health. The film is about a college student Ashutosh who is working on a new scientific invention that can Change The Entire World. His mentor Akash always guides & motivates him whenever he is stuck somewhere. Finally, after 3 years of hard work and dedication, Ashutosh succeeds in his invention but nature
04-26-2021 | Leisure, Entertainment, Miscel …
GM Productions
GM Productions New Song “Aa Bhi Ja” based on the current situation of Covid- …
GM Productions recently launched a sad romantic song ‘Aa Bhi Ja’ on the YouTube channel 'Valmik's Destination' on Saturday 24th April 2021. The music video's story revolves around a journalist and her life partner's life impacted by the COVID-19 pandemic. Singer Valmik Pawar has given his magical voice. Mansi Suravase & Syed Saber have acted as the lead actors. The official video for this song has been conceived and directed by Grish

08-05-2021 | Arts & Culture
Winter Film Awards
Winter Film Awards International Film Festival Returns for 10th Annual Celebrati …
New York City's Winter Film Awards showcases films from emerging filmmakers from around the world in all genres, with a special emphasis on highlighting the work of women and under-represented filmmakers. The 10th annual Festival runs September 23-October 2 in New York City. The lineup includes 91 fantastic films from 28 countries, 7 free education sessions and amazing parties. Winter Film Awards International Film Festival, which was one of NYC's last
02-26-2021 | Advertising, Media Consulting, …
Syndicate Market Research
Global Film Capacitors Market 2021 Applications, Leading Manufacturers, Analysis …
Syndicate Market Research recently launched a study report on the global Film Capacitors market project light on the significant drifts and vigorous cannon into the evolution of the trade, which includes the restraints, market drivers, and opportunities. The report talks about the competitive environment prevailing in the Film Capacitors market worldwide. The report lists the key players in the market and also provides insightful information about them such as their
06-12-2019 | IT, New Media & Software
Biaxially Oriented Polyester (BoPET)
Biaxially Oriented Polyester (BoPET) Market Share: Key players, Application, Foc …
Biaxially Oriented Polyester (BoPET) Market report provides Six-Year forecast 2019-2025 with Overview, Classification, Industry Value, Price, Cost and Gross Profit. The prime objective of this report is to help the user understand the market in terms of its definition, segmentation, market potential, influential trends, and the challenges that the market is facing. It also covers types, enterprises and applications. To start with, analytical view to complete information of Biaxially Oriented Polyester (BoPET) market. It offers market view
08-11-2017 | Business, Economy, Finances, B …
QyResearchReports
2017-2022 Waterproofing Film Market, Status and Forecast, by Players : Polyglass …
Qyresearchreports include new market research report 2017-2022 Waterproofing Film Report on Global and United States Market, Status and Forecast, by Players, Types and Applications to its huge collection of research reports. Considering the dynamic business environment within the global Waterproofing Film market, companies are in favor of keeping strategies enabling competitive advantage right up their sleeves. This is however difficult achieve without exhaustive and accurate information on the market. The report
06-21-2017 | Advertising, Media Consulting, …
Polyester Film (PET Film) Market
Global Polyester Film (PET Film) Market Growth 2017-2022 Mitsubishi Polyester Fi …
PET or polyethylene terephthalate film is a thermoplastic polymer commonly referred to as polyester film. Like most thermoplastics, PET films can be biaxially oriented or bubble extruded. Polyester film is one of the most common substrates used in the converting industry because of its balance of properties in relation to other thermoplastic polymers. Ask For Sample Copy of Report : http://bit.ly/2toHtBg This report provides detailed analysis of worldwide markets for Polyester Film
05-02-2017 | Energy & Environment
Progressive Markets
Solar Control Film Market, Glass Film, Privacy Film, Solar Windows Film Market T …
Solar control film (window film market)is a thin laminate ergonomically designed for windows, doors, and other transparent building surfaces, which is used to reduce the intensity of light and heat transfer. Glass has low reflectance for room temperature radiation, which causes loss of thermal energy from buildings. On the other hand, glass has high transmission of solar radiation, which increases the energy necessary for cooling the building. Fill the form
Comments about openPR
OpenPR ist the nicest and most clearly laid out PR platform I have seen to this day. The press releases are displayed very nicely and clearly and without any unnecessary frills. The updates are fast and the finished release looks appealing and is clearly legible. Even with 16 years of experience one discovers new things from time to time. Congratulations!
Gabriele Ketterl, Director Marketing & PR, Menads