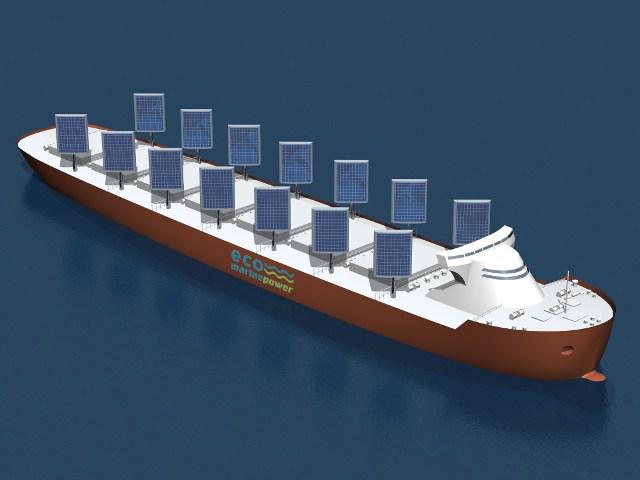 Eco Marine Power Co. Ltd. (EMP) today announced that lab testing of its Aquarius MRE System – a revolutionary wind & solar power solution for ships – will commence in a test facility in Osaka, Japan from early June. This is a significant move forward as it takes the project into the prototype testing and type approval phase after which sea trials can be conducted.Testing will initially be focused on the computer control system including rigourous testing of the various safety features that have been specifically developed for the Aquarius MRE System. KEI System Co, Ltd. of Osaka, Japan, is providing the control system which will be based around its reliable & robust KEI-3240 platform.The lab testing phase will also involve evaluating the operability of the command console and be expanded to include testing other components of the Aquarius MRE System such as the EnergySail – a revolutionary rigid sail designed by EMP that enables a number of renewable energy technologies to be incorporated into a single unit.Greg Atkinson, Director of Development at EMP commented that:“The confidence our development partners have shown in the Aquarius MRE System plus the interest we are seeing from the shipping industry convinced us to move ahead with our development & testing schedule. Our vision is that once again we will see ocean going ships fitted with rigid sails, but this time we will be incorporating additional renewable technologies to create a system that will provide shipping a cost effective path towards lower noxious gas emissions & lower fossil fuel consumption”.The Aquarius MRE System is an advanced integrated system of rigid sails, solar panels & energy storage modules that will allow ships to tap into renewable energy by harnessing the power provided by the wind and sun. The array of rigid sails will be automatically positioned to best suit the prevailing weather conditions and they can be lowered and stored when not in use or during storms. The system can also be used when a ship is in harbour or at anchor.Ships ideally suited for this cutting edge marine renewable energy (MRE) system include bulk ore carriers, oil tankers, patrol ships & fishery protections vessels. EMP has also progressed with the development of a version of the system for use on smaller ships such as passenger ferries and Unmanned Surface Vessels. (USV’s)Land-based testing of the system is scheduled to finish in early 2013 and Eco Marine Power is currently discussing with several companies plans for installing a system onboard a ship for sea trails during the second half of 2013.For further details about the Aquarius MRE System please see: http://www.ecomarinepower.com/en/aquarius-systemAbout Eco Marine PowerEco Marine Power Co. Ltd. is an internationally focused technology company based in Fukuoka, Japan, that develops innovative eco-friendly solar, wind, electric and hybrid marine power and propulsion solutions. The company also develops sustainable ship concepts that incorporate the latest green energy technology and is currently working on a number of design projects including the Aquarius Eco Ship, the solar-electric hybrid power vessel Tonbo and eco-solar commuter ferry Medaka.or you can follow us on Twitter @EcoMarinePowerMedia Enquiries:Greg AtkinsonPhone: +81 92 287 9677 Mobile: +81 90 1369 7568E-mail: greg.atkinson@ecomarinepower.com Aquarius MRE System & EnergySail are trademarks of Eco Marine Power Co. Ltd.Eco Marine Power Co. Ltd. (EMP) is an internationally focused technology company based in Fukuoka, Japan, that develops and markets innovative eco-friendly solar, wind and electric marine power & propulsion systems. The company works with a number of strategic partners to offer a wide range of solutions including hybrid marine propulsion & power, solar marine power, solar-electric marine power and wind & solar marine power systems for ships, ferries and other vessels.Eco Marine Power is currently developing a wind power and solar energy system for ocean going vessels called the Aquarius MRE System (Patent Pending) This innovative system will allow ships to utilise wind power via an integrated system of rigid but movable sails in order to reduce fuel consumption and lower noxious gas emissions. The rigid sail or EnergySail technology being developed for the system is unique to EMP. Solar panels may be fitted to these rigid sails and/or located elsewhere on the ship.In addition ship owners and operators will be able to reduce the CO2 footprint of their fleet and employ the Aquarius MRE System on a wide variety of ships and vessels. The system is particularly suited for oil tankers, bulk ore carriers (bulkers) and survey ships.The Aquarius MRE System is also being designed so that it will require little attention from the ships crew, will be relatively easy to install and offer an attractive ROI (Return on Investment) for shipping companies and ship owners. This cutting edge marine renewable energy technology will help shape the future of green shipping and will provide a safe and practical way for ships to tap into the inexhaustible power provided by the wind and sun.Another cutting-edge green technology development project being undertaken by Eco Marine Power is the Tonbo solar-electric ferry or hybrid marine power (HMP) concept vessel. This innovative design project incorporates the latest solar module, Lithium battery and electrical power management technology so that the Tonbo's fuel consumption and emission of noxious gases will be significantly less than other ships or ferries of the same size.Eco Marine Power - innovative renewable energy solutions for sustainable shipping.Eco marine Power Co LtdAqua Hakata 5th Floor, 5-3-8, Nakasu, Hakata-ku, Fukuoka, 810-0801. Japan.Phone:+81 92 287 9677 Fax: +81 92 287 9501