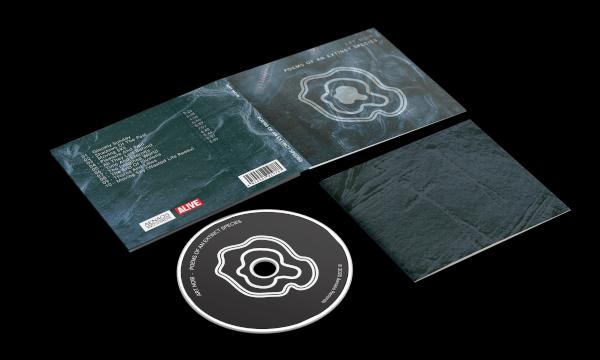 A new cycle begins for the German film composer Jan Weber who returns with the album “Poems of An Extinct Species” of his project ART NOIR after a decade since the album “Silent Green”.Diagnosed with the neurodegenerative disease Amyotrophic Lateral Sclerosis (ALS) in 2015, Jan had just begun to lay down the framework for the album, when he was still able to move his fingers. With the loss of voluntary muscle movement slowly progressing, he needed an assistive eye-tracking communication device to complete the recording over the following 5 years. The production, mixing and mastering of the album was later supported by Thomas Navas (Lost in the Void) and Stefan Vesper (Steve Dragon, In Strict Confidence).The album unfolds a compelling and intellectually stimulating story through Nadine Stelzer’s ethereal voice and thought-provoking lyrics that challenge the confines of our current perceptional reality. Enveloped in an anthropological-ecological mantle, it explores the vulnerability and concomitant wound-inflicting ability of the human species, invoking imagery and imagination of what was, what is, and what may be. Jan Weber, with his indomitable passion for producing and creating worlds, is the epitome of the strength of the human spirit and an inspiration to everyone.In a century where unprecedented technological advancements engendered devices that have become indispensable extensions of our motor and sensory systems, “Poems of an Extinct Species” is an ode to the multidimensional and adaptive human-nature interrelationship through time and space.The album was released on CD and as download on January 29, 2021 by Aenaos Records.https://www.aenaos-records.com/products/682035-poems-of-an-extinct-speciesAenaos Records Herrnhuter Str. 2 | 04318 Leipzig (Germany) Email: info@aenaos-records.com Press contact: promo@anemos-promotions.comIndependent Record Label for Darkwave - Gothic Rock - Post Punk - Alternative - Shoegaze - Indie Rock - Indie Pop - Dream Pop - Synthwave - Neofolk - Dark Folk - Dark Ambient - Experimental. Find news, releases, free downloads of our artists: ART NOIR - ART OF EMPATHY - BLACKIEBLUEBIRD - EMERALD PARK - GOLDEN APES - PRINCIPE VALIENTE - (((S))) - SHEARER - SILVERMANNEN - THE SEARCH - THE SILENCE INDUSTRY

05-20-2019 | Arts & Culture
Adelaide Books
New Book By Jan Marin Tramontano: What Love Becomes
ADELAIDE BOOKS is proud to offer the latest work by Jan Marin Tramontano What Love Becomes hitting stores everywhere on February 7th, 2019. What Love Becomes is a work of literary fiction that traces the intimate landscape of two contemporary marriages from their idealistic, yet misguided beginnings. Each couple mistakenly believes their happily ever after will come without really knowing who’ve they’ve married. What begins as self-deception quickly morphs into deception
08-30-2013 | Business, Economy, Finances, B …
Datamax-O'Neil
Datamax-O’Neil Appoints Jan Mariën Product Manager EMEA
Experienced expert for printing solutions supports customized product development for the EMEA market BOURG-LÈS-VALENCE, FRANCE – Datamax-O’Neil, a leading manufacturer of stationary, vehicle mount, portable label and receipt printers, has named Jan Mariën as Product Manager EMEA. The new position has been created to even better fulfil the special requirements of customers in Europe, the Middle East and Africa. Jan Mariën is managing the development of Datamax-O’Neil’s product lines in the
04-13-2012 | Industry, Real Estate & Constr …
RE/MAX Alliance Group
Jan Sundahl Joins RE/MAX Alliance Group in Sarasota, Florida
SARASOTA, FLORIDA – Realtor Jan Sundahl has joined RE/MAX Alliance Group in the University Office. Sundahl has 18 years of real estate experience, and has lived in East County Sarasota for 15 years, giving her a strong knowledge of East County communities and neighborhoods. Formerly with RE/MAX Properties, which has since merged to form RE/MAX Alliance Group, she has been awarded the RE/MAX Executive Club award and was a three-time
08-15-2011 | Business, Economy, Finances, B …
HitFox GmbH
Jan Beckers, Tim Koschella and Team Europe found HitFox
Berlin, Germany, 12 August 2011: HitFox will launch in Germany on-time for the gamescom 2011. HitFox specializes in user acquisition for game publishers around the world. HitFox users can find exclusive deals for selected games and hardware at www.hitfox.de. Publishers will benefit in two different aspects: On one hand, no fix costs for the acquisition of new customers, on the other, they will receive a target group of passionate gamers
01-08-2010 | Associations & Organizations
CollegeInvest
Application window for college financial aid opened Jan. 1
Colorado's CollegeInvest tells students to send their federal application ASAP January 7, 2010, Denver, CO – January 1 was the opening window for students to begin to apply for college financial assistance using the Free Application for Federal Student Aid (FAFSA). The FAFSA can be submitted through June but CollegeInvest, Colorado's not-for-profit higher education financing resource, encourages parents and students to submit their forms as early as possible because most financial aid
01-02-2008 | Science & Education
Intel GmbH
Intel Teach endorsed by EU Commissioner Jan Figel
At the high-level European EMINENT Conference in Brussels, held from Dec 06-07 2007, EU Commissioner Ján Figel, responsible for Education, Training, Culture and Youth, stressed the importance of a methodological approach in Professional Development for Teachers. “Digital Competence is a pre-requisite to learn learning” he said in front of over 250 delegates from around the world. “Learning to learn is a crucial competence for teachers, who are the most critical
Comments about openPR
OpenPR is clearly structured and remains true to its principle of confining itself to the essential parts. OpenPR has proven to be a very good and reliable partner to our media agency: Within the shortest time the releases are online and go down well with the media representatives. The success of OpenPR is reflected in the steadily increasing number of press releases. It is good that OpenPR exists!
Ursula Koslik, Director Marketing & PR, F+W Hamburg