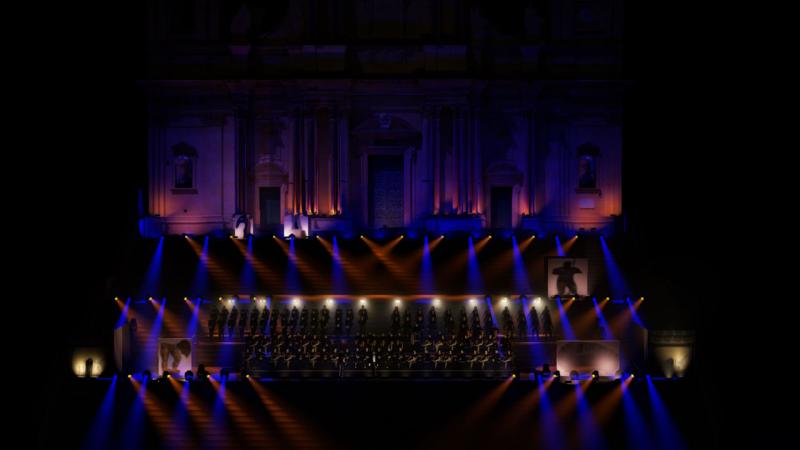 Toronto, ON. CANADA, January 22, 2021 – With 90 million records sold, Andrea Bocelli is one of the most popular artists of all time, and it was an honour to have Bocelli and Igor Mitoraj’s sculptural works as the protagonists of a special evening in Noto to promote Sicilian Unesco sites. wysiwyg was also honoured to be there to help light this concert and its cultural assets as Andrea’s voice filled the piazza in front of the Noto Cathedral in Sicily during a concert held to convey a message of courage and unity among the seven sites recognized by UNESCO in Sicily. The tenor was accompanied by an orchestra and the Teatro Massimo Bellini choir in Catania, directed by Alberto Bartalini. The event is organized thanks to the financial commitment of the Sicilian Region and the Municipality of Noto. A unique art-in-art event running until February that looks to ignite a focus on Sicily's world-class assets. Massimo Tomasino, a local lighting designer, was asked to be the programmer for Andrea’s special event. Not only did Massimo have the lighting design experience, but he also had experience with architecture, theater, dance, music, and art. This is what this whole event needed. Massimo Tomasino has been a wysiwyg user since Release 10. From the first time he saw the program, he knew this was the way of his future and investigated further. For Massimo, Wysiwyg has become an indispensable and go-to tool through the years and used on all of his designs as he works with various Italian artists. Fast forward to today, Massimo continues to enjoy wysiwyg R45. We had a chance to talk to Massimo to find out more about this distinct production for Andrea Bocelli, Massimo’s use of wysiwyg and how the Educational Program is being offered at the University of Palermo. For this concert, it was most important to enhance the five works of Mitoraj positioned on the stairs of the cathedral, the cathedral itself and of course, the star of the show, Andrea himself. The Director, Alberto Bartalini, wanted to see renderings immediately of what the proposed layout and look of the show would be, which Massimo drew up using wysiwyg. Massimo started to plan a couple of months in advance and imported the cathedral from a Sketchup file with true-to-size measurements, and using a Notebook workstation with two external monitors, connected to another networked computer to stream in video content from a media server. This way, Massimo was able to see everything he was working with and what he had at his disposal, as he freely moved around the 3D space using a 3D connexion mouse. In order not to obstruct any view of the cathedral, all gear had to be placed on the ground floor.Once the rig was in place, all pre-programming was done using wysiwyg and a video rendering was sent to the Director to share Massimo’s concept and vision. Alberto appreciated the ease of using wysiwyg and loved the fact that he could see results immediately if he asked for changes. “The most beautiful thing is when I talk about the project and tell artists, directors, or anyone who is part of the production, ‘Everything you see in these renderings will be the same.’ Someone always laughs in disbelief until they see the virtual programming and their jaws drop. These are the ones who go on after the show telling everyone that all the lighting design was done with virtual pre-programming.” – Massimo TomasinoUsing wysiwyg, Massimo is confident that the lighting visualization is accurate, especially for the architectural lighting and beam photometrics on the cathedral. It gives Massimo the confidence that his lighting designs will be as he previsualized them once he arrived in Noto a few days before the event. Massimo Tomasino teaches at the University of Palermo where they now offer the wysiwyg Educational Program for students and faculties. He’s found wysiwyg to be his go-to software for decades and now he can pass the knowledge along to the next generation of Dreamers out there. Students at the University of Palermo are eager to learn lighting design so they too can design shows like this one for Andrea Bocelli. When offered the choice what to do for their final exam, Massimo has been excited to see many of his students bring a live concert or theater production to him, reiterating his belief that wysiwyg should be offered in all art schools and academies. Such an evening as this one for Andrea Bocelli, organized with the utmost respect for the anti-contagion regulations from Covid19, is one of the first we have heard of to launch a message of strength and union this past year. Exciting to know that wysiwyg was there to play such a big role in a pivotal time on earth. Many thanks to Massimo for his time and contribution to this article.35 Ripley Ave Toronto, ON M6S 3P2CONTACT: Amber LongMore About CAST Group of Companies Inc. Established in 1994, Toronto Canadian-based software and hardware developer, CAST Software is a member of the CAST Group of Companies Inc. CAST Software serves its core markets in entertainment production, special events and meetings. CAST’s award-winning flagship software products are wysiwyg – lighting design and previsualization suite, and Vivien – Event Designer and the new real-time tracking technology, BlackTrax. All products are designed and created in-house and supported by an established global distribution and re-seller network.