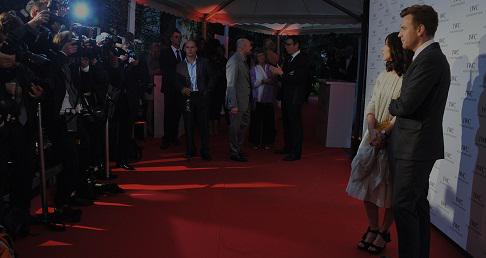 Cannes/Schaffhausen, 22 May 2012 – During the Cannes International Film Festival, the Swiss watch manufacturer IWC Schaffhausen hosted another glamorous evening event demonstrating its commitment to film and film-makers. The exclusive Filmmakers Dinner, which was presented in partnership with Finch’s Quarterly Review and, for the first time, Mercedes-AMG, was attended by famous personalities such as Oscar winner Robert De Niro, actor Ewan McGregor and top model Karolina Kurkova. IWC Friends of the Brand such as “Grey’s Anatomy” star Eric Dane and gallery owner Tim Jefferies were also on the high-calibre guest list. At the after party, soul singer Aloe Blacc provided the evening’s musical highlights. “For years now we have had a passion for film and film-making. We are happy to celebrate it here in Cannes with other like-minded individuals and friends of the IWC brand,” explained Georges Kern, CEO of IWC. “Every director tells a story with his films. At IWC, storytelling is the basis or, to be more precise, part of the DNA of everything we do,” emphasized Kern. For some time now, there have been close ties between the film industry and IWC Schaffhausen. Not only does IWC cultivate long-standing personal relationships with several international actors, film directors and producers; it has also produced a number of its own film projects with some of its Friends of the Brand. Aside from this, watches from IWC have been favourite props in countless Hollywood movies and US TV series. These timepieces “made in Schaffhausen” were worn by actors with leading roles in the thriller “Wall Street”, in the major boxoffice success “Ocean’s 13” and in the action comedy “RED”. They have also been favourites with some of the protagonists in the US TV series “Grey’s Anatomy”, “Private Practice” and “Gossip Girl”. A glittering evening The Filmmakers Dinner at the legendary Hotel du Cap-Eden-Roc was attended by around 200 well-known personalities from the world of entertainment, such as renowned actors Robert De Niro, Ewan McGregor and Gerard Butler, celebrated photographer Peter Lindbergh and top model Karolina Kurkova. Other prominent guests included Friends of the Brand Eric Dane, Paulo Coelho and Tim Jefferies. Terry Gilliam, American-born British screenwriter, film director, animator, actor and member of the Monty Python comedy troupe, was presented with the Finch’s Quarterly Filmmaker Award, created by producer and media entrepreneur Charles Finch, together with an IWC watch with an engraved dedication. “For years, Terry Gilliam has given us endless demonstrations of his extraordinary talent for film-making, both behind and in front of the camera. It is an enormous pleasure for me to present him with this award,” said Charles Finch, explaining the choice. Exclusive concert by Aloe Blacc At the Filmmakers Party, which followed the dinner and was attended by approximately 200 more guests and personalities, charismatic superstar Aloe Blacc gave a private concert and the audience was enthralled by his soul-steeped vocals. The highlight was the joint performance by Aloe Blacc and the former Supertramp band member John Helliwell. Their interpretation of the all-time classic “Just the Two of Us” by Bill Withers was an unforgettable musical experience. Afterwards, DJ Jack E from Saint-Tropez kept the party going in full swing until the early hours of the morning. -ENDS- For more information, please contact: BIZ COM – For PRoactive Communications Tel. : +971 4 33 20 888 Fax: +971 4 33 20 999 Email : info@bizcom.ae W: www.bizcom.ae BIZ COM – For PRoactive Communications