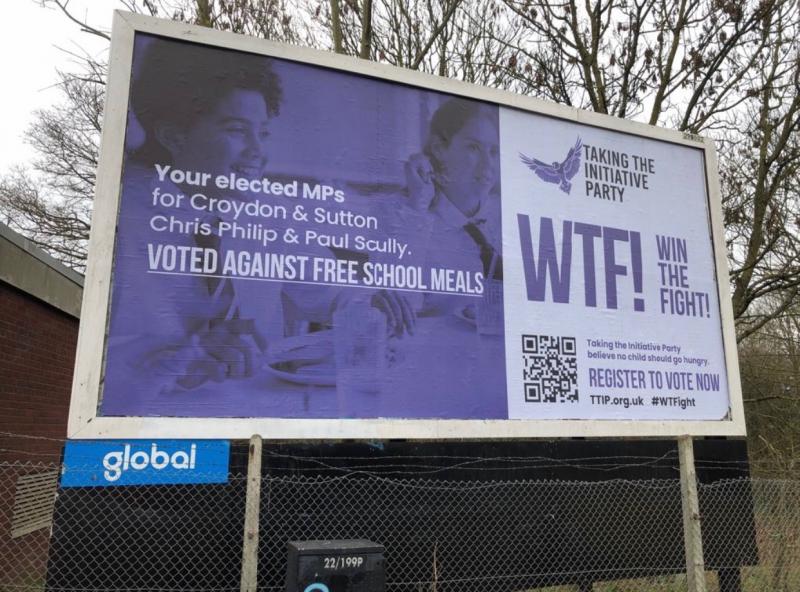 Taking the Initiative Party have launched a WTF!? campaign in Croydon and Sutton, encouraging people to register to vote

Taking the Initiative Party: a new political party that focuses on making real change, by putting integrity back into the heart of politics. A party that aims to create a voice for the working-class people, who are currently not represented by the Labour or Conservative parties; a voice that stands against social injustice and fights for the freedom of expression and speech. “How can we possibly live in a society where someone could vote against a child having food?” Simone Watts, mother of a 7 year old pupil at a Croydon primary school says. Her words came in response to the news that Croydon and Sutton MPs Chris Philip and Paul Scully had voted against providing free school meals in the recent parliamentary debate on the issue.Mrs Watts continued: “My child has been a victim of this disgusting decision making…he is getting bullied at school for going with a limited packed lunch while other children, whose parents can afford school lunches, are eating well. I need the help and so does my child. It’s absolutely inhumane and disgraceful to vote against this.”Her words were also echoed by local headteacher Mark Jordan of Parallel Learning Trust: “In my opinion, it should be a national priority to ensure all pupils have access to free school meals, thus allowing them to achieve their true potential. The impact on providing free school meals for pupils cannot and should not be underestimated. A government study into this in a pilot showed pupils in key stages 1 & 2, made between 4–8 weeks’ more progress than primary aged pupils not part of the pilot. This research only serves to underpin what we all know and feel is right, which is that a child that is fed regularly and healthily will be able to concentrate and focus more.” *Despite Marcus Rashford’s efforts to extend the Free School Meal plan in October 2020, the government remained unsupportive of continuing the aid and refused an extension. The rejection of the plan was followed by comments such as: “extending freebies are a sticking plaster not a solution” made by Ben Bradley, the MP for Mansfield. Rashford stated, in despair of this matter: “A significant number of children are going to bed tonight not only hungry but feeling like they do not matter because of comments that have been made today”. **Taking the Initiative Party have launched a “WTF!” campaign in Croydon and Sutton, encouraging people to register to vote in response to recent political decision making. Charles Gordon, a founding member of Taking the Initiative Party (TTIP), who have launched a series of outdoor advertising boards in and around Croydon calling out the two local MPs for their voting record on free school meals said: “Taking the Initiative party believes that no child should go hungry. It is a sad state of affairs, in a civilised society, when a government can vote against a child having access to food. Our government should be protecting our youth and supporting our communities, not sabotaging their growth. This is why we’ve launched the Win The Fight! (WTF!) billboard campaign. We want people to get more engaged with local democracy and we’re encouraging the people of Croydon to ensure they are registered to vote. Change happens when local voices are heard. Together we can win the fight.” TTIP currently runs a food larder every Wednesday, led by Sasha Johnson – a member of TTIP’s Executive Leadership Committee, in and around Croydon to provide food to those in need as part of their commitment to their local community. *** The party was founded by a group of British business people, some from working class backgrounds, who felt politically homeless and wanted to make a difference. They passionately believe that there is a gap in the political scene for true representation from and for locals, like Simone Watts and her son, who care about the communities they serve. They plan to field candidates in the elections to the London Assembly to ensure the diverse community of Croydon is represented when it comes to decisions affecting the borough and its residents.unit 128 291, kirkdale London United Kingdom se26 4QD Press@theinitiativeparty.org.uk 02086987000Taking the Initiative can see a brighter future for the UK, where everyone has a chance to make a difference and to thrive.

08-08-2018 | Business, Economy, Finances, B …
TANA-B Hair Company
Expert Team of Stylists Offering Services to Men and Women in Sanderstead
SANDERSTEAD, SOUTH CROYDON – AUGUST 4, 2018 – Tana-B Hair Company is offering a wide range of hair services to the men and women of Sanderstead, South Croydon. They provide hair colouring services, hair extensions, and wig fitting. They also provide styling and cutting for both men and women. Finding the perfect way to fix your hair for a special event, such as prom or a wedding, can be
03-29-2017 | Politics, Law & Society
Port Road West Croydon Veterinary Clinic
Choose the best vet clinic in Adelaide for your lovely pets
Australia 27-03-2017. Port Road West Croydon Veterinary Clinic is glad to provide your lovely pets the care and attention they actually deserve. Pets are no doubt like members of your family and it is also important they hold a good health. To keep them healthy or to keep them away from the adverse effects of diseases, it is important to provide them the right treatment when they experience disease, injury
09-29-2011 | Energy & Environment
nationwidegutters
Nationwide gutters announces the launch of their Service Website
Nationwide gutters, 1A Church Road, Croydon, UK is glad to announce the launch of our official business website which will surely enhance and improve the search experience. Our website http://www.nationwidegutters.co.uk/ is thoroughly upgraded as well as updated as per our latest demands in the industry, to provide strategically developed services that are extremely beneficial for our clients. The company's goal is to provide its visitors with a virtual experience through
07-01-2011 | Business, Economy, Finances, B …
Thomas Mansfield Solicitors
Employment solicitors ThomasMansfield ready for changes wrought by new employmen …
Croydon, Surrey ( openpr ) July 01, 2011 - ThomasMansfield LLP, one of the nation’s oldest and most respected employment law solicitors, is ready to support and advise individuals and employers on all legal matters following the government’s phasing out of DRA. The changing of the retirement age, which has been much discussed in the news, will affect all those who may have been considering retirement but have now missed the
05-23-2011 | Fashion, Lifestyle, Trends
Matt Foden Photography
London wedding photographer introduces new range of fine art albums to their ran …
London wedding photographers Matt Foden Photography, based in Croydon, UK, have introduced a new album range to their line up. The album, manufactured by Yorkshire-based suppliers Folio Albums, are sourced from local suppliers and use recycled fine art papers and sumptuous vintage leather covers. The introduction of this new album range have enabled Matt Foden Photography to meet an increasing demand from customers for innovative, luxury albums with a difference. Commenting
02-15-2010 | Industry, Real Estate & Constr …
MERJS
Leading commercial property agency MERJS announces successful let of Croydon Hig …
MERJS, one of London's leading commercial property agencies, is delighted to announce the successful let of a retail unit in Croydon High St. The commercial property, consisting of a basement, ground and part first floor of Grosvenor House, benefits from A3/A4 use and will be used for a restaurant. The lease has a duration of twenty five years at the price of 65K for 7,500 square feet. For further information
Comments about openPR
OpenPR ist the nicest and most clearly laid out PR platform I have seen to this day. The press releases are displayed very nicely and clearly and without any unnecessary frills. The updates are fast and the finished release looks appealing and is clearly legible. Even with 16 years of experience one discovers new things from time to time. Congratulations!
Gabriele Ketterl, Director Marketing & PR, Menads