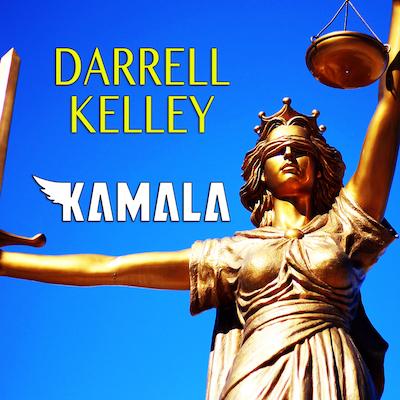 Between the official certification of our new president and vice-president, and the runoff elections in Georgia providing a new party majority now in both the House and the Senate, it's been quite a week. Presidential Inauguration Day on January 20th this year will be a historic event and Georgia musician Darrell Kelley commemorates it with “Kamala” (Viral Records), his latest single about the first black woman to hold the office of vice-president of the United States. As Kamala Harris takes office this month it will mark yet another major milestone achieved within the civil and women’s rights movements. Democrat Harris, a current junior senator and former attorney general for the state of California, along with Joe Biden defeated Donald Trump and Mike Pence, the incumbent Republican president, and vice-president during the heated and bitter 2020 elections last November. This makes her not only the highest-ranking female ever elected in the USA but also the first African American as well as Asian American to hold this vice-presidential office. This may also make the song “Kamala” the first song ever written and recorded about a duly elected United States VP.Kelley, a prominent player in both the R&B and Gospel music world, perseveres in setting his sights during 2021 on his continued crusade of making socially conscious recordings that shine a spotlight on how many of the less fortunate and minority races within our population must deal on a daily basis with the huge discrepancy in society’s unfair meting out of justice and guarantees of basic human rights. A crusade he has tirelessly pursued all throughout his career in the entertainment industry. The single will be distributed globally by his record company to all major digital retailers and streaming platforms on the internet. In addition, a North American radio and press campaign has just been launched to promote “Kamala”. Mainstream Top 40, Mainstream R&B/Hip-Hop, and Adult Contemporary format radio stations have already been serviced with the release. Multiple personal appearances will be booked later this month. To learn more go to www.darrellkelleyofficial.com. Darrell is currently available for interviews and/or appearances. Added news updates and other information about upcoming events may be found at https://www.facebook.com/darrellkelleysmusic, and is where Viral Records plans to debut his “Kamala” music video in the coming weeks. Darrell Kelley’s press kit will be provided upon request to members of the media by contacting the representative below.Media Contact: Stevie B Mia Mind Music Phone: 800-843-8575 Email: press@miamindmusic.com254 6th Street, Suite #2, Hoboken, NJ 07030Stevie B Mia Mind Music Phone: 800-843-8575 Email: press@miamindmusic.comWith over 30 years of experience, Mia Mind Music provides music promotion and record label services for both signed and unsigned artists as well as record companies.

06-23-2021 | Leisure, Entertainment, Miscel …
Mia Mind Music
"Sober" by ET Boys on Wake Up! Music
House vocalist, Pepper Gomez of Wake Up! Music announces that the much anticipated first release by the new band, the ET Boys, called "Sober" is out June 25, 2021. Pepper notes, "I've been waiting for a Nu Pop act to sign to the Label but little did I know it would come from my own sons." The ET Boys from SoFlo are the brothers Tacboy and Sharkeyes. Sharkeyes creates all the
04-22-2021 | Leisure, Entertainment, Miscel …
Mia Mind Music
Wake Up! Music Announces New EDM Release: “Oh My Heart”
Record label Wake Up! Music announced the release of the Nu House single, “Oh My Heart” featuring and introducing the son of the label founder, producer, and musical artist Pepper Gomez. The young IMG agency male model and vocalist, Tacboy, accompanies his mother on their debut record “Oh My Heart” which will be distributed by ONErpm and be available worldwide beginning on April 30, 2021. When questioned as to what
06-26-2020 | Leisure, Entertainment, Miscel …
Mia Mind Music
Viral Records Announces New Darrell Kelley Album Release
Darrell Kelley's label, Viral Records, announced the release of his latest album, "The Audacity". It is currently being distributed globally by his record company to all major entertainment publications, news platforms, radio stations and digital retailers. As with many of Kelley's prior releases the artist utilizes his music as a contemporary commentary tool to bring attention to the plights and pitfalls that many of the less fortunate within our population
09-19-2017 | Arts & Culture
Mia Mind Music
"She" by Charity Ekeke An Indicator 2017 May Be The Next Year of the Woman
The January 2017 Women's March on Washington may have been an early indicator that this year may be a return to 1992's Year of the Woman. Now with the release of Charity Ekeke's album which is titled "She" that early indicator is looking less and less like a slim possibility and more and more like a potential reality. Women have a voice and as Ms. Ekeke embodies and demonstrates on

03-12-2021 | Business, Economy, Finances, B …
The Law Office of Sonia M. Frontera
Pandemic-proof Your Career at Black Women's Business Summit
The ongoing COVID 19 pandemic has wreaked havoc with employment and careers, with women taking the brunt of it. About 2.5 million women have lost their jobs or dropped out of the workforce during the pandemic. Vice President Kamala Harris calls women’s exodus from the workforce a national emergency that demands a national solution. Women seeking to jumpstart their careers and businesses will find valuable advice and empowerment at the
01-11-2021 | Media & Telecommunications
Soigne'+Swank Magazine
Two Queens Media Launches Soigne’+Swank Magazine
Florida/Maryland, January 8, 2021 – Two Queens Media announced today that the premiere issue of Soigne’+Swank Magazine was released on January 6, 2021 digitally and in print. The magazine will focus on Black Excellence and feature content that uplifts, empowers, inspires, and highlights black excellence from entrepreneurship to the executive c-suite. The magazine will print on a bi-monthly basis and target men and women 18-50 years old. As two black women,
07-16-2018 | Tourism, Cars, Traffic
Conrad Cairo
Outstanding Recognition for Conrad Cairo
Conrad Cairo celebrates receiving Trip Advisor’s certificate of excellence as two of its leading restaurants, Kamala & Oak Grill, have been awarded the 2018 Trip Advisor Certificate of Excellence. The certificate is awarded to hospitality businesses that have achieved great guest reviews. The stylish South Eastern dining restaurant, Kamala, offers guests an escape from city life through a culinary journey to the Far East. Oak Grill, a renowned modern Lebanese restaurant,
09-25-2017 | IT, New Media & Software
MaxSolz
Dreams Go Online This Festive Season With MaxSolz
We are MaxSolz a bunch of techies with an extremely passionate heart to deliver the best. Our expertise range from Website Development to Digital Marketing, Hosting Solutions to Customized Portal Development and from Woo-Commerce to Magento we have it all. We are offering a 40 % discount on some of our services this Festive Season. Get your own Online Store @ INR 7999/- and Website @ INR 2999/- MaxSolz is a
04-21-2011 | Leisure, Entertainment, Miscel …
Phuket Ocean Villas Co. Ltd.
Ker-Ching: Phuket rakes in US$26 million over Thailand New Year
Phuket, Thailand: In the aftermath of a busy Songkran (new year in Thailand), tourism chiefs in Phuket have been doing their sums to assess just how successful the festive season actually was. Officials from the Tourism Authority of Thailand (TAT) reported that hotel occupancy during the holiday period averaged seventy percent across the Island. Resort hotels in popular beach areas such as Bang Tao, Surin, Kamala, Patong, Karon and Kata reported occupancy
01-14-2011 | Industry, Real Estate & Constr …
Phuket Ocean Villas Co. Ltd.
Phuket property sales predicted to rise
Phuket, Thailand: Thailand property developer, Seacon Development, are predicting that property sales in Phuket will increase by twenty five percent in 2011. The developers of Seacon Square on Srinakarin Road in Bangkok may have a point, as foreign investment in Phuket property has continued to rise, year on year, since 2008. In 2010, foreign investment in Phuket property totalled four billion baht (US$ 131 million). This represents an increase of twenty
Comments about openPR
OpenPR ist the nicest and most clearly laid out PR platform I have seen to this day. The press releases are displayed very nicely and clearly and without any unnecessary frills. The updates are fast and the finished release looks appealing and is clearly legible. Even with 16 years of experience one discovers new things from time to time. Congratulations!
Gabriele Ketterl, Director Marketing & PR, Menads