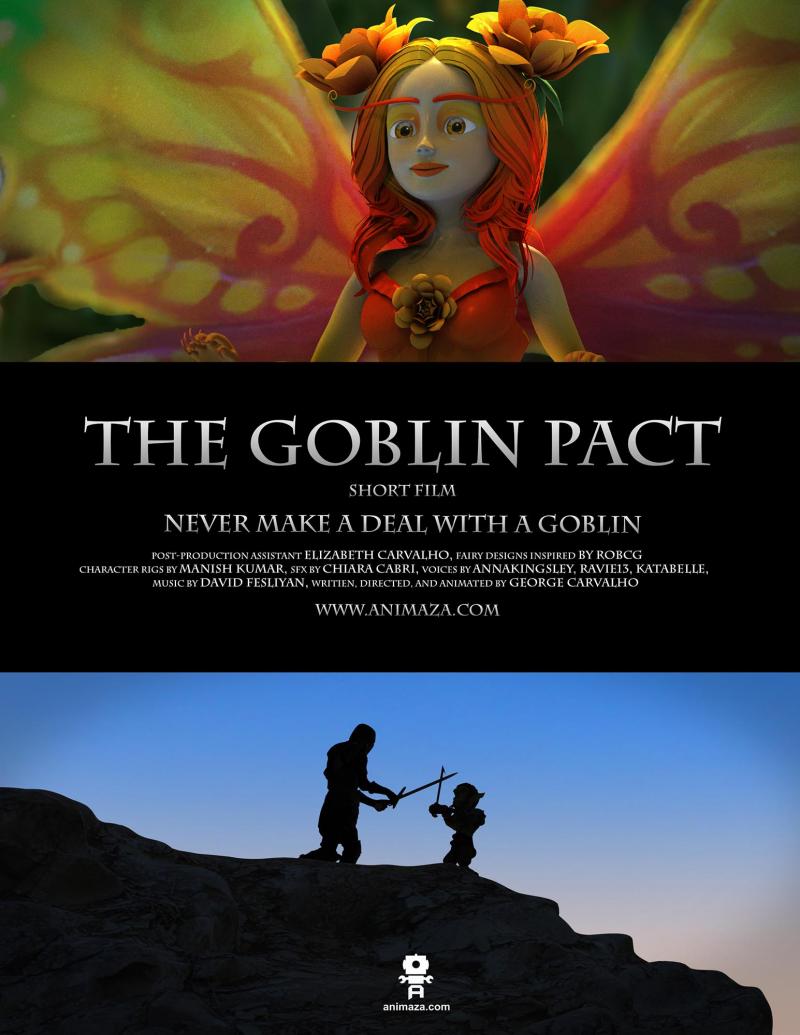 Poster for the Animated Short Film

MIAMI, FL, Dec 31st — The short animated film “The Goblin Pact” was named best animated film at the Reale Film Festival in Milano, Italy for the month of December, 2020. “It’s a great way to close out the year and put a great step forward into the new year,” says the film’s director George Carvalho. “It’s also a tremendous validation to the quality of the work and the innovative way in how we made it. For example, we used markerless motion capture to animate the characters. This technology does not require expensive suits or an array of cameras to be used to capture the performance. Just point the depth camera at the actor and capture the action.” The film was also an official selection in the Flickfair Film Festival and the 35th Annual Fort Lauderdale International Film Festival. It can be seen on Animaza.com (https://animaza.com) or on our youtube channel.George Carvalho 7975 SW 86 St Apt 204 Miami, Florida 33143Animaza Studios is a ne entertainment company founded in Miami, Florida.

08-13-2020 | Arts & Culture
New Media Film Festival
New Media Film Festival
INNOVATIVE STORIES & TECHNOLOGY CREATORS FINALLY HAVE THEIR DAY – AUGUST 15TH 2020 NEW MEDIA FILM FESTIVAL AWARDS SHOW The 121 New Media Films & Content from 32 countries that are nominees in the 11th Annual New Media Film Festival® voted. Resoundingly the nominees voted to have an online awards ceremony and forgo an in person festival this year. With 38 World – 15 U.S., and 30 L.A. Premieres and the
08-04-2020 | Fashion, Lifestyle, Trends
Handmade Rugs Company
Recent Project: Yesterday Film
The Handmade Rug Company were contacted to supply handmade rugs for the British romantic comedy film directed by Danny Boyle and written by Richard Curtis, Yesterday. Jack Malik is a struggling singer-songwriter in an English seaside town whose dreams of fame are rapidly fading, despite the fierce devotion and support of his childhood best friend, Ellie. After a freak bus accident during a mysterious global blackout, Jack wakes up to
10-24-2018 | Industry, Real Estate & Constr …
SUCO Robert Scheuffele GmbH & Co. KG
SUCO Image film 2018
To celebrate the company's 80th anniversary, SUCO presented a new image film of the social media plattform YouTube. The 2-minute image film was conceived and realised by MSB-Films: The film focuses on the core values of the SUCO brand, which are also reflected in the new company vision: * Quality in the area of internal training and further education of specialists and managers as well as multi-stage quality assurance throughout the entire
05-03-2017 | Arts & Culture
Nine Ladies Film
The Wasteland Film
The Wasteland a modern day mystery thriller from Nine Ladies Film, scheduled to be shot in the Derbyshire Dales in July 2017. The story follows the journey of Laurence, a loner, a man with a hidden past, who arrives in a small village on the offer of work from a local farmer Frank. Taking the job of rebuilding a field boundary stonewall, Laurence becomes intrigued with the mysterious figure of Holly,
01-24-2013 | Media & Telecommunications
IFT international, inc.
Executive AG protection film
With the beautiful retina display of the new Apple iPad and other top of the line mobile devices, users are more concerned than ever with protecting their screens from daily abuse and optimizing their viewing experience. Now IFT launched an innovative technologies to long line of Screen Protector products, Anti-Glare protection film which provide the ultimate protection for mobile devices. The IFT’s Anti-Glare protection film primary advantage is that it can
01-22-2012 | Business, Economy, Finances, B …
Hollywood Sunset Pictures Inc.
Feature Film Equity needed...
La Mirada CA. Hollywood Sunset Pictures Inc. (hspfilms) completed principle photography on "BRUCE the Challenge" a Docu-Dramady/Martial Arts Fantasy. Now we are currently in postproduction.(We are seeking Equity investor for finishing funds)We have 500+ screens nationally and also have International releasing by Lonestar distribution.Contact us for more Info. A little about the film... Mr. Ed Parker known as the Father of American Karate for bringing Martial Arts to the
Comments about openPR
OpenPR ist the nicest and most clearly laid out PR platform I have seen to this day. The press releases are displayed very nicely and clearly and without any unnecessary frills. The updates are fast and the finished release looks appealing and is clearly legible. Even with 16 years of experience one discovers new things from time to time. Congratulations!
Gabriele Ketterl, Director Marketing & PR, Menads