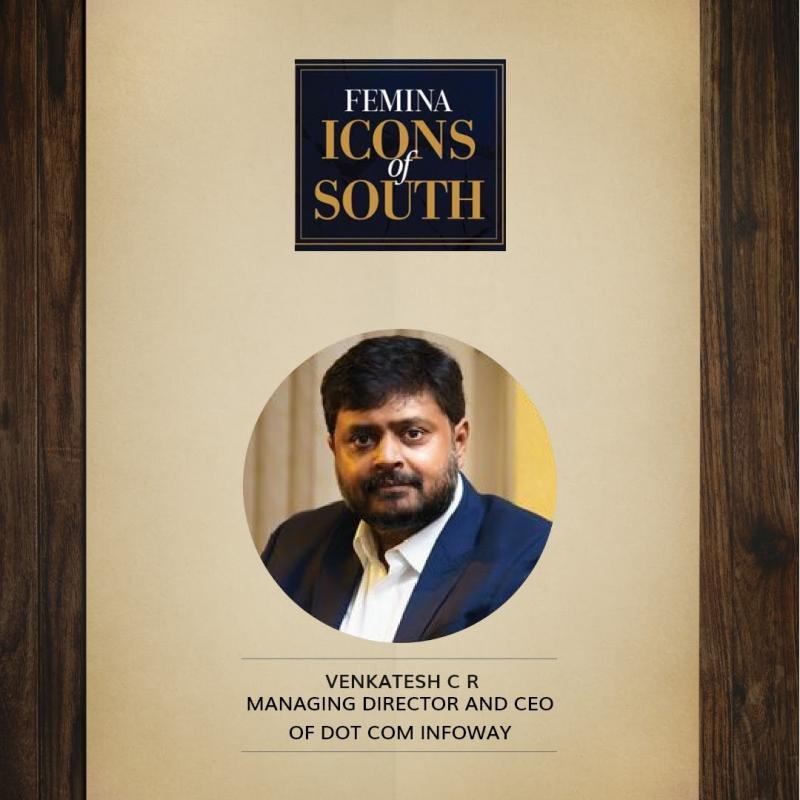 India - December 18, 2020 -- Femina, India’s premier English-language women’s magazine, has recognized DCI’s Venkatesh C.R. as one of the heralded Icons of South India in its November 2020 edition. Venkatesh joins an impressive and inspiring group of people who have made massive contributions in their respective fields -- men and women who have served as primary drivers of innovation and industry in their chosen callings. Being an eclectic mix, no less than the region’s brightest paragons in the arts, sciences, and sports were acknowledged. Joining the ranks of entrepreneurs and business leaders like Venkatesh were artists, designers, tennis players, cricketers, doctors, hoteliers, among others. Venkatesh is humbled by the recognition and describes it as nothing short of wonderful. He expressed his gratitude to Femina for honoring him in a Facebook post sharing the magazine’s dedicated post for him. The post has since garnered hundreds of comments from peers, colleagues, and friends congratulating the veteran business wizard for another achievement.True to the terrific human achievements that Femina wishes to highlight in Icons of South India, Venkatesh’s rise to the top in India’s I.T. Industry is a story for the books. He is primarily responsible for building Dot Com Infoway, now a globally-recognized and widely-acclaimed I.T. company, brick by brick in all the more than 20 years that he served as its founder, CEO, and managing director. The recognition is but another milestone that Venkatesh adds to the growing list of accolades he is putting under his belt. Being a debut edition, this release marks the Femina’s first foray into recognizing the best most influential individuals who hail from South India. The magazine strongly hints that it will continue to release an Icons of South edition in the future, as it makes it clear that “there are definitely more icons honor and more issues to look forward to in the future!”Contact Info: Name: Venkatesh C.R. Organization: Dot Com Infoway Address: 3, Vaigai Colony, 1st Floor, Anna Nagar, Madurai - 625020, Tamilnadu, India Phone: +91-452-2522257Dot Com Infoway is a custom software and web application development company with a team of 300+ qualified software engineers. DCI's outsourcing services include Software development, Internet marketing, Mobile app development, PHP & .NET development

12-30-2021 | Business, Economy, Finances, B …
Dot Com Infoway
MD and CEO of Dot Com Infoway, Mr.Venkatesh C.R. awarded ‘The Entrepreneur of …
Madurai – Dec.28, 2021: Managing Director and CEO of Dot Com Infoway, Venkatesh C.R., has been awarded ‘The Entrepreneur of the Year in Service Business’ for his pioneering efforts in the Software services and Marketing solutions industry for about 2 decades. Venkatesh C.R. is the most persuasive leader in the IT sector, influencing millions of businesses across the globe for more than 20 solid years with his adroit team of professionals
10-23-2020 | IT, New Media & Software
Dot Com Infoway
Indian Achievers' Forum Bestows “CEO of the Year” to Dot Com Infoway's Venka …
India, October 23, 2020 -- Venkatesh C.R., the CEO and founder of multi-awarded I.T. company, Dot Com Infoway, has bagged the coveted “CEO of the Year Award” from the Indian Achievers’ Awards annually conducted by the Indian Achievers’ Forum. The award was initially given as a digital Certificate of Appreciation in recognition of Venkatesh’s “contribution in nation-building and outstanding professional achievement” as well as his continuous drive to lead and
11-08-2019 | IT, New Media & Software
Dot Com Infoway
Dot Com Infoway Selected as a 2019 Red Herring Top 100 Asia Winner!
Red Herring announced its Top 100 Asia award winners in recognition of the leading private companies from the region, celebrating these startups’ innovations and technologies across their respective industries. Red Herring Top 100 Asia enlists outstanding entrepreneurs and promising companies. It selects the award winners from approximately 1000 privately financed companies each year in Asia. Since 1996, Red Herring has kept tabs on these up-and-comers. Red Herring editors were among the
05-14-2019 | Advertising, Media Consulting, …
Dot Com Infoway
Dot Com Infoway Ranked as the Top Marketing & Advertising Agency in India by Clu …
Dot Com Infoway, a leading IT company, has been ranked 1st in the top marketing and advertising agency rankings in India by Clutch - a global B2B research firm. The rankings are based on a thorough analysis and evaluation of over 100 agencies in India on parameters such as services offered, market presence, thought leadership, customer satisfaction, and the overall quality of work. Clutch used its proprietary methodology to review the